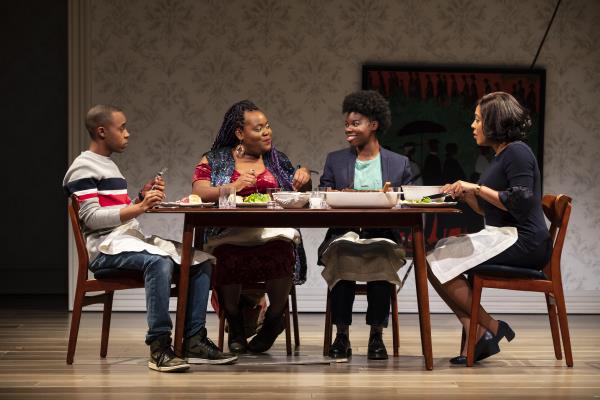 The latter is Eve’s Song, a seriously unfunny dark comedy by Patricia Ione Lloyd at the Public Theater. Sadly, it’s also one more example of how dramatic subjects do not automatically produce dramatic plays.

As is so often the case, Lloyd’s play uses overtly theatrical means to convey ideational messaging while failing to create compelling characters in an engrossing narrative. She calls the play “a queer female version of Get Out,” the 2017 satirical horror film about white brains being transplanted into black bodies, but the connection between the movie and the play isn’t as apparent as her comment seems to suggest.

Making its deliberately off-kilter writing even more difficult to access on an emotional rather than intellectual level is the coolly distanced style that director Jo Bonney imposes on the performances, especially those of the black family at the heart of the narrative.

Heading the family is Deborah Johnson (De’Adre Aziza, giving the strongest performance), a well put-together executive with a “type-A personality,” as Lloyd describes her, albeit subject at work to sexual harassment. Recently divorced, she lives with her two children, Mark (Karl Green), a nerdy 14-year-old, and Lauren (Kadijah Raquel), a college student, whose coming out as queer Deborah is still processing.

Fearful of cracks in the façade of safety she’s erected, Deborah is an autocrat of the dining table. Even pushing one’s seat back after leaving the table is necessary to keep the world at bay. Such rigidity, though, only increases the children’s mutual sniping. Deborah’s intent is to keep them in line, to protect them from the racist violence that looms threateningly in the world outside. Now and then, in one of the play’s more tired stylistic conventions, the actors freeze while one of them speaks their thoughts about all this directly to the audience.

Then there’s the woke lesbian, Upendo Haki Supreme (Ashley D. Kelly), a community organizer who’s changed her name from Tiffany, dresses in flashy Afro-punk (Emilio Sosa did the fine costumes), and becomes the naïve Lauren’s girlfriend and mentor in wokeness. One of her lessons, delivered in hifalutin lyrical terms, teaches Lauren that all black women, since Eve, the first, were born with a song, but that social oppression has made these songs forgotten. If only women sang their songs, life would be so much better, she suggests. To the extent that Lauren takes the advice and becomes her own woman, Upendo’s own fate will be upended.

They employ odd, dance-like movements (credited to Stephanie Batten Bland) heightened by gunshots and Hana S. Kim’s flashing, chalk line-like projections. Among other visual symbols that things are going awry in the Johnson house are the growing cracks on the wall behind them, enhanced by Elisheba Ittoop’s solid sound design.

Seen in silhouette, the ghosts do double duty by pushing around the set’s sliding walls (designed by Riccardo Hernandez and sensitively lit by Lap Chi Chu) for scene transitions. These expressionistic insertions seem like heavy-handed illustrations of the thematic content, even though Deborah offers a connection via a monologue she delivers at the denouement.

For all its topicality, Eve’s Song is more a sequence of thematically related moments than a well-integrated drama heading toward a climax. Too often, exposition substitutes for what might otherwise be shown. As a result, Deborah’s revelation, despite its connection to what we’ve been watching, seems more an artificial contrivance for the sake of making a point than the inevitable conclusion to a dramatized situation it might otherwise have been.

Patricia Ione Lloyd’s talent is palpable and her concerns are of great importance. But in Eve’s Song she fails to blend these into a satisfyingly integrated theatrical experience, allowing didactic concerns to draw focus from dramatic ones.