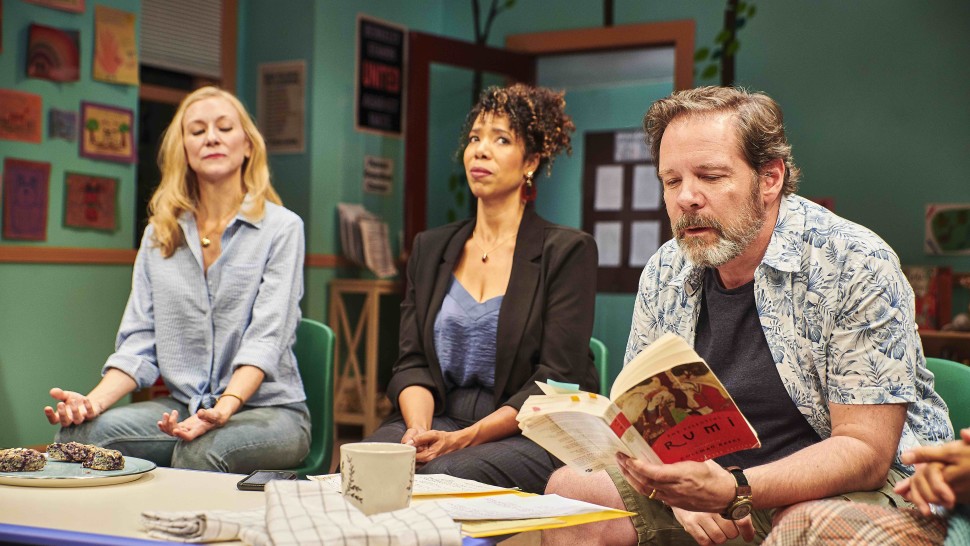 Set in an elementary school library at the titular Eureka Day School, in Berkley, CA,  Jonathan Spector’s satire explores the excessively PC behavior of the tongue-waging liberal parents who serve on the school’s board. In spite of the fact that they’re all pretty similar, they’re challenged when it comes to forging simple agreements.

The conversation is friendly at first, but when a mumps outbreak threatens the well-being of every child in school, the conflict between individual good versus the good of the group becomes a culture war beyond all culture wars.

To deal with the problem, school director, Don, initiates a “community activated conversation” with parents, on the school’s FaceBook page. The agitating sounds of digital notifications (sound designer, Amy Altadonna) Ka-plop, Ping, Zing, Ka-ping – implode in our ears, accompanying their commentary. The onstage conversation from the board gets dwarfed by the social media noise – the lurid posts from concerned parents.

Finally, one parent writes, “We have a winner. First Nazi reference.” And it’s not the last. As a metaphor of course, that is insanely over the top. Still, it highlights a community’s fear of being overrun by the belief systems of others.

A new voice in New York theater, Spector has crafted a play that digs into the zeitgeist of hostility, and trolling in a wickedly funny way. Specifically, of course, this story draws on the national panic over the recent measles outbreak. The anti-vaccine movement, prompted by a medical journal  suggesting that vaccines could cause autism, spurred an epidemic of fear.

People with faith-based objections, along with others inspired to create all-natural lives for their children, clung to this movement, even when the autism connection proved fraudulent, and was retracted. But the issue, precisely because it does not parallel party politics, allows the audience to delve into the nature of dialogue, and consensus versus discord.

Indeed, the story turns deadly serious when one board member’s child becomes seriously ill with the virus. Finally, the characters we meet as stereotypes in the first act become somewhat more complex as we hear about their personal experience, and motivation.

Brian Wiles’ Eli, an overly loquacious and privileged white man who believes in an open marriage, and every other conceivable notion of free expression, becomes a far more subtle adult by the end of the play. And K.K. Moggie as the single mother with an unvaccinated child chooses more socially condonable behaviors by the play’s end.

As portrayed by Kate Cullen Roberts, Suzanne, a white bread Midwesterner with several children in the school, wins our empathy in spite of her unpolitic views. In contrast, Elizabeth Carter as Corina, an African American lesbian, and the newest member of the board, integrates rather quickly, and rightfully so.

John McDermott’s set of tiny colorful kindergarten chairs, book shelves, and drawings, is highlighted by a poster that reads, “What does social justice mean to me?” And Adrienne Campbell-Holt’s direction turns this frenetic comedy into human drama with deft sleight of hand.