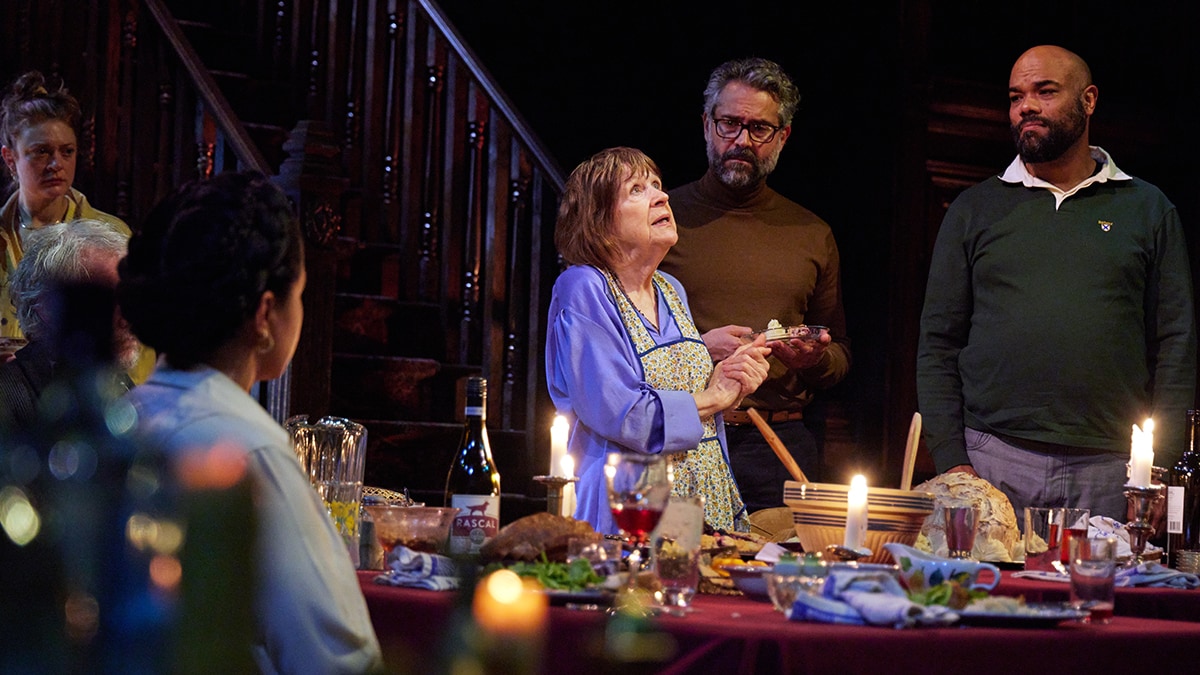 Mr. Watkins’s dark, cerebral comedy is inspired by James Joyce’s The Dead, which leaves multiple traces in its wake. It swirls around the satirical pleasantries of a group of mostly vacuous artists and pseudo-intellectuals, barely acquainted with one another, if at all, assembled for a dinner party during a January snowstorm. Their hostess, the aging, eccentric, still sprightly Morkan (based on Kate Morkan in The Dead), has invited them to her huge, old, and scruffy suburban manse. Fizzy with forced enthusiasm she tries to make them comfortable, hoping they’ll drink freely, engage in scintillating chitchat, and enjoy a goose she’s cooking with the help a young woman named Loren (Colby Minifie). The single best reason to see Epiphany lies inBurke’s impishly oddball, whiny-voiced Morkan.

The guests—all perfectly dressed by Montana Levi Blanco—include a married gay couple, Sam (Omar Metwally), a psychiatrist, and Taylor (David Ryan Smith), in “marketing”; an alcoholic named Freddy (C.J. Wilson), another borrowing from The Dead; Kelly (Heather Burns), a boozy avant-garde pianist-composer, and her lawyer husband, Charlie (Francois Battiste); and (Jonathan Hadary), who has known Morkan for 47 years. Missing, it seems, is Morkan’s sister, Julia, who will, however, play her role toward the end.

Last to arrive is the beautiful Aran (Carmen Zilles), a philosophically inclined doctoral student of music. The deepest character, she’s the partner of the promised guest of honor, Gabriel, Morkan’s famous writer nephew (another character from The Dead). Gabriel’s promised presence is the draw that brings everyone here; unable to make it because of a deep depression, he sends Aran in his stead, having asked her to read his speech (also indebted to The Dead).

Morkan’s purpose in having this party (as in The Dead)is to celebrate the theme of epiphany (or Epiphany, depending on the circumstances), discussion of whose several philosophical and religious meanings occupies a good deal of time. In essence, it’s mainly meant to suggest seeing through the material world and, miraculously, discovering something much profounder, like the Magi realizing the significance of the baby Jesus.

One of the first signs that the ensuing party may not be all good company, drinks, and cheer is when Morkan refers to the attachments she sent in her invitations listing everything she’d planned for the event. No one read them, though, a fact they try to hide from Morkan, claiming to one another that they neither saw nor had the time to read them.

More tremors of foreboding arise when Morkan asks that everyone deposit their cell phones in a box, the goal being to remove distractions from social media. Ergo, no checking those neglected attachments! Later, when the boxed phones all begin ringing at the same time, the sense of mystery thickens, as it does each time the lights flicker.

The friends’ willingness to drive or take the train to Morkan’s home in a heavy snowstorm while not bothering to read her carefully plotted agenda may not be plausible, but it leads to several amusing situations. One is when they’re asked to sing the lyrics to a song she included, and Kelly (Heather Burns) gamely tries to fake it.

This and other semi-farcical bits, like a selection of earsplitting, avant-garde piano music that the polite guests struggle not to critique; the unfortunate destination of a wayward carving knife; or the illegibility of Gabriel’s written words suggest that Mr. Watkins’s play could be titled The Dinner Party that Goes Wrong.

Laughs occasionally arise from the often clueless commentary, sometimes mixed with passing insights, on subjects like technology, consumerism, commodification, and empiricism. There are also slender threads regarding loneliness, loss, guilt, grief, and the need for sustained human companionship. But, aside from a moment or two of pathos, much of it floats by in a miasma as we wonder—apart from a titbit here and there—who these people are, just what their relationship is to Morkan, and where the play is going.

John Lee Beatty’s brilliant, hulking set, with an endless central stairway that shifts direction to accommodate yet another one ascending to the lofty ceiling, is a perfect environment for the spookily shadowed lighting of Isabella Byrd. Ms. Byrd also conquers the challenge of keeping the actors visible on a stage that, much of the time, seems lit only by numerous candles. Towering windows allow us to see the snow descending outside, conjuring an atmosphere of ghostliness and suspense, made even more palpable by Daniel Kluger’s eerie music and sound design.

This aura, though, is transient and the play, for all its occasional felicities, remains bound by its discursiveness to terra firma, never achieving its own epiphany.