February 27, 2022: Anyone who’s ever struggled to master a foreign language in private classes will find something to appreciate in English,Sanaz Toossi’s fitfully amusing, dramatically languid dramedy, now running at the Linda Gross Theatre under the auspices of the Atlantic Theater Company and Roundabout Theatre Company. Wait a second. Theatre? Theater?  That’s English for you. 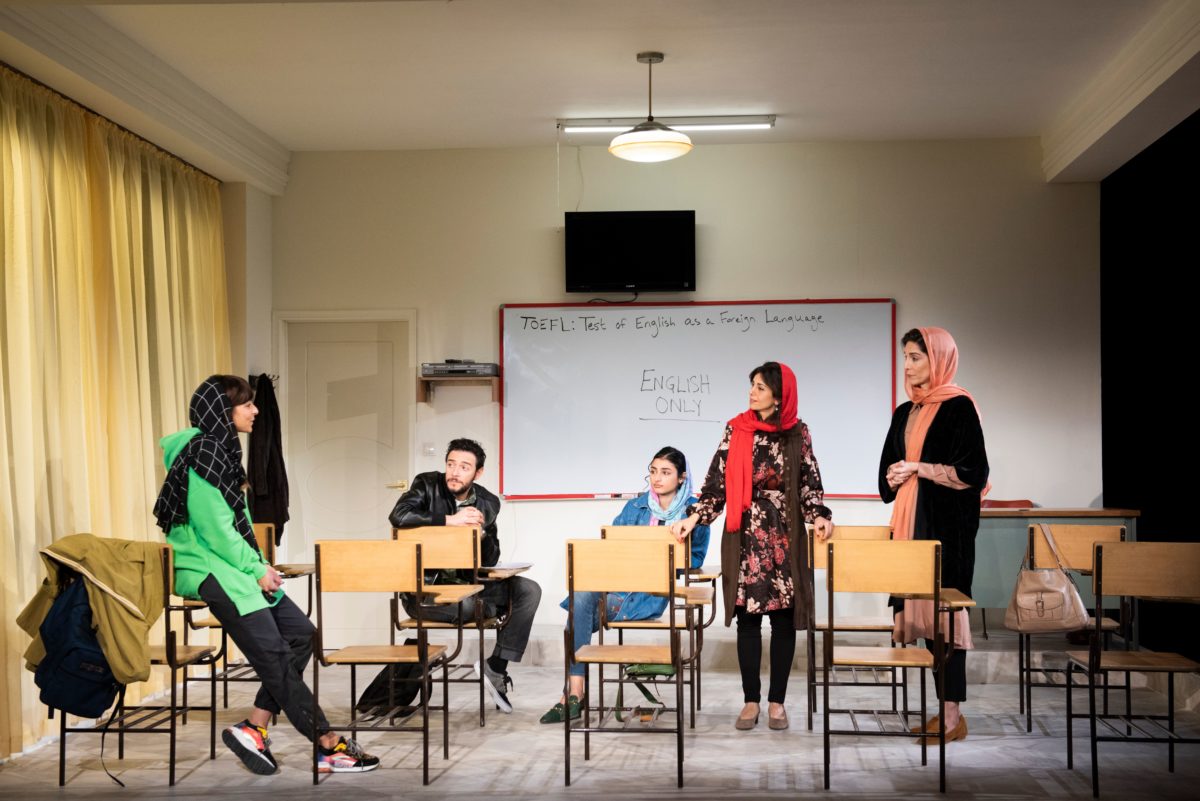 February 27, 2022: Anyone who’s ever struggled to master a foreign language in private classes will find something to appreciate in English,Sanaz Toossi’s fitfully amusing, dramatically languid dramedy, now running at the Linda Gross Theatre under the auspices of the Atlantic Theater Company and Roundabout Theatre Company. Wait a second. Theatre? Theater?  That’s English for you.

Toossi’s play is reminiscent of The Education of H*Y*M*A*N K*A*P*L*A*N, a 1968 musical about a cross-section of Lower East Side immigrants, circa 1920, studying English in an adult education class. (Side note: its title character came from Kyiv, and opening night was spoiled because intermission brought the news of Martin Luther King, Jr.’s assassination, which may have contributed to its early demise.)

English takes place in the Iranian city of Karaj in 2008. The set, designed by Marsha Ginsberg, is a cube-like structure showing an ordinary classroom, with a small number of chair-desks and a flat-screen TV hovering over a large whiteboard. The cube is on a revolve that slowly shifts from scene to scene (there are 22)—accompanied by classical-style piano music (sound by Sinan Refik Zafar)—to present the action from different angles, or to show a narrow corridor outside the classroom. Your first view is from the outside, showing a windowed wall on which an electric sign in Arabic and Roman letters advertises the school. When the play began at the matinee I attended, and the cube began to move, the mechanism got stuck and we had to wait a few minutes before it could be fixed so the process could begin all over again.

This mishap was quickly forgotten as the play’s five Iranian, Farsi-speaking characters were introduced. The teacher is Marjan (Marjan Neshat) in her 40s, once resident for nine years in Manchester, England, and fluent—if subject to the occasional flub—in American English. Her task is to get her students ready to take the TOEFL, or the Test of English as a Foreign Language. As in most such classes—been there, done that—she insists her students speak only the language they’re learning; naturally, this isn’t always possible.

The innocent Goli (Ava Lalezarzadeh), 18, has the most to learn, although her reasons for learning English seem to have no ulterior motive than self-satisfaction. Roya (Pooya Mohseni), in her 50s, wants to learn English so she can visit her family in Canada and speak to her granddaughter, whose assimilationist parents refuse to let her learn Farsi. Elham (Tala Ashe), in her late 20s, is a would-be physician who hopes to study in Australia; having already failed TOEFL multiple times, she gets frustrated enough to lash out rudely. The sole male is the soft-spoken Omid (Hadi Tabbal), profession unmentioned, around the same age. He speaks English like a native, although he thinks otherwise.  Why is he even there? Each student not only confronts issues with vocabulary and grammar, but with their accents, which serve both to inspire laughs (especially with “w” words) and to differentiate among the students.

The playwright, a first-generation Iranian-American from California, whose Wish You Were Here, about the Iranian Revolution, will soon open at Playwrights Horizons, has written English so that the characters can shift back and forth between their native language and the one they’re studying. When speaking in Farsi, they converse in familiarly colloquial English; otherwise, they speak—according to their relative ability—in awkward, accented English. Sometimes, they ruminate on the differences between their native tongue, whose poetic values they appreciate, as opposed to the more prosaic nature of the one they’re learning.

The play assumes the audience knows about life in Iran in 2008 and doesn’t offer specifics for those unfamiliar with political conditions. Much has to be assumed from various indirect references to people’s desires to move elsewhere or rationales for remaining in the country rather than moving abroad.

Over the course’s six weeks, we watch the characters improve their skills, develop petty rivalries, express their different attitudes toward English (not all favorable), and, in one or two cases, depart. The scent of romance floats by but, essentially, this is a character play with not much of a plot. Nuance and subtlety dominate as we pick up hints about these people without ever getting too deeply into their lives. Their linguistic victories and setbacks are what best defines them. Political issues never intrude.

The women’s scarves, worn differently, are about the only thing that tells us we’re in a Muslim country. Omid, wearing a leather windbreaker (a word with a certain resonance in the play), could be any nice-looking young man almost anywhere. Everyone is attractive, and the characters are no strangers to profanity (in Farsi). The play itself, while automatically intriguing because of its locale, could probably be reconceived for many other cultures, so universal are its characters and themes.

Under Knud Adams’s placid direction, just a few scattered moments ignite on the level of conflict-based drama; mostly, the play moves along lazily, rising, falling, and concluding not with a bang but a whimper. It runs an hour and 45 minutes but is in no hurry to get there. The acting is authentic and restrained, Enver Chakartash’s costumes are appropriate, Reza Behjat’s lighting suits the atmosphere, and Marsha Ginsberg’s set—the script doesn’t mention a revolve—saves the play from visual stasis.

The set, however, contains a narrow supporting beam that occasionally creates a sightline obstruction. Although you may appreciate a thing or two from English, that beamis one of several obstructions that might make you think twice before enrolling in it.