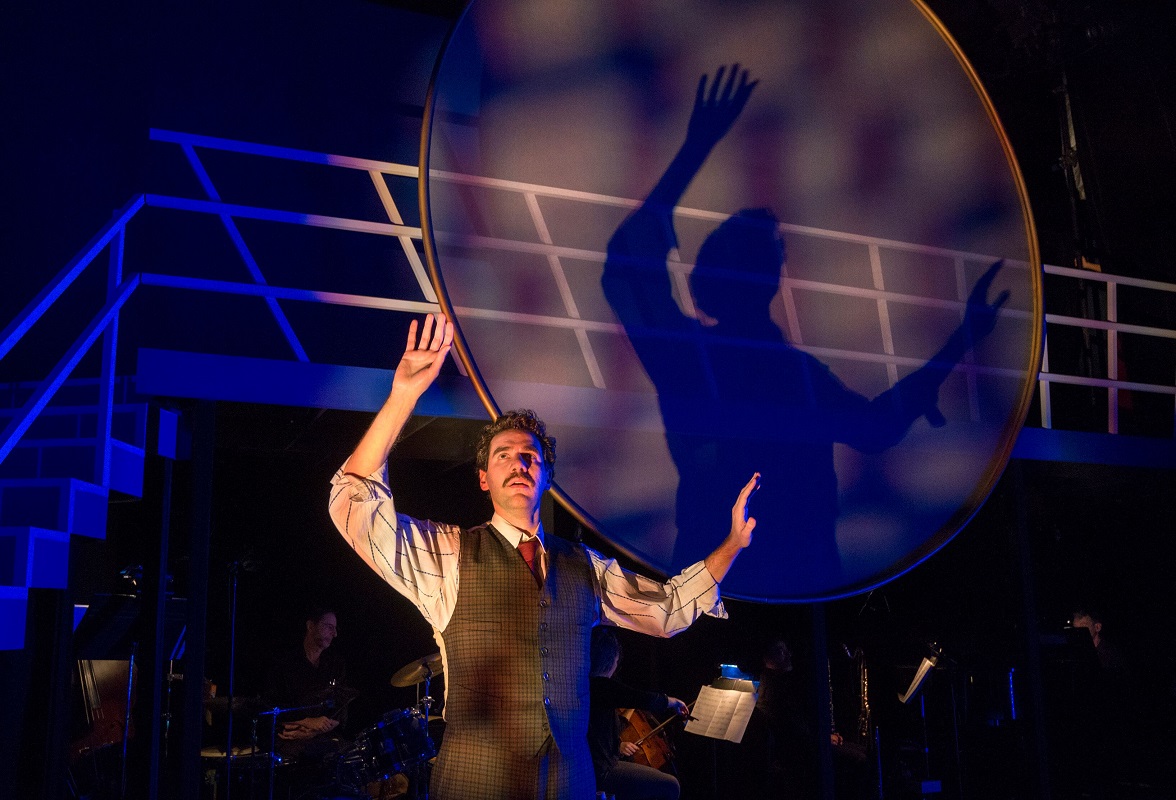 But for many, Lightman is best known as the author of Einstein’s Dreams. The 1992 novel explores our relationship to time in light of Einstein’s theory of relativity. It was adapted for the stage by David Gardiner and Ralf Remshardt  in the 1990s and about a decade later became a musical with book and lyrics by Joanne Sydney Lessner and music and lyrics by Joshua Rosenblum. This season Prospect Theater Company has brought the show to 59e59 Theaters. The show is directed by the company’s producing artistic director, Cara Reichel, and features Zal Owen as the conflicted physicist.

Most strikingly, the show boasts a 6-piece orchestra (music director Milton Granger on Piano; Bruce Doctor on drums/percussion, Kiku on violin, Jonathan Levine on woodwinds, Eleanor Norton on Cello and Saadi Zain on bass) playing Lessner and Rosenblum’s gorgeous score from the back of the stage. Above the orchestra a balcony leads to a staircase, and in front of the balcony, there’s a large, round screen that’s sometimes a clock and sometimes a surface for projections. Scenic designer Isabel Le is both ambitious and creative.

In the patent office in Berne, Switzerland, Einstein has two companions – in his daily life, fellow physicist Michele Besso (Brennan Caldwell), and in his dreams, the alluring Josette (Alexandra Silber). No longer in love with his wife, Mileva (Tess Primack), Einstein is captivated by this mysterious woman he has created for himself. Einstein’s dreams are also populated by other people in the office: his boss, Peter Klausen (Michael McCoy); the new employee, Johannes Schmetterling (Vishal Vaidya); Klausen’s longtime secretary, Hilda (Stacia Fernandez); and Marta (Tess Primack), the typist, as well as Mileva and Besso and his wife, Anna (Lisa Helmi Johanson).

When he’s not dreaming Einstein works furiously on his new theory. He doesn’t even go home to sleep. Besso warns Einstein that he’s working too hard and not taking credit for his accomplishments. Klausen, just wants the work done and is unaware of Einstein’s special talents.

Time works differently in each of Einstein’s dreams. It ends (“The End of Time”). It’s unpredictable (“The Great-Greats,” “Fitful Glimpses”). It goes slower as we move faster (“High-Speed Motion”). In his waking moments, Einstein realizes most of his theories will not be understood (“The Relativity Rag”).

The score is inventive and representative of European music at the turn of the century (operetta, music hall, American jazz).  The lyrics are clever (“He showed why we wanta/Define light as quanta”).

Einstein’s Dreams is not your typical musical. It’s not for the intellectually challenged. At time (perhaps because we’re sitting still) it moves slowly. There’s plenty of emotion, but it’s mostly about ideas. However, people with curious minds will find this show light years ahead of the pack.