The Pershing Square Signature Center is currently housing a diverse array of theatrical attractions Off-Broadway, one from the resident Signature Theater Company and a pair from The New Group which is renting two of the complex’s spaces. Signature is presenting its revival of Edward Albee’s double bill At Home at the Zoo at the Diamond stage, while The New Group offers the long-awaiting American premiere of Jerry Springer: The Opera in the Linney and David Rabe’s new play Good for Otto is at intimate Griffin. 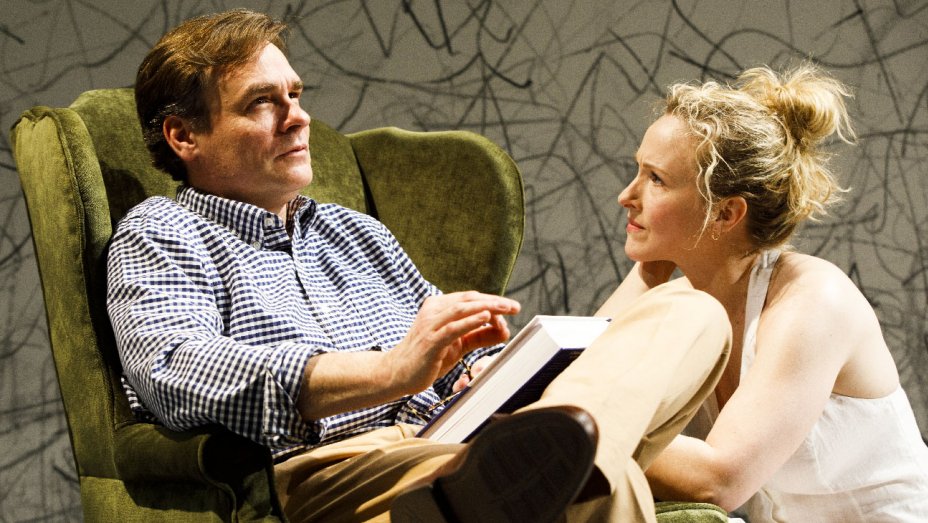 The Pershing Square Signature Center is currently housing a diverse array of theatrical attractions Off-Broadway, one from the resident Signature Theater Company and a pair from The New Group which is renting two of the complex’s spaces. Signature is presenting its revival of Edward Albee’s double bill At Home at the Zoo at the Diamond stage, while The New Group offers the long-awaiting American premiere of Jerry Springer: The Opera in the Linney and David Rabe’s new play Good for Otto is at intimate Griffin.

At Home at the Zoo consists of The Zoo Story, Albee’s shattering one-act of alienation and violence which put him on the map back in 1959, and Homelife, a 2004 prequel. Zoo Story depicts the Central Park encounter of conformist text-book publisher Peter and wildly provocative drifter Jerry. As Peter attempts to read on an isolated bench, total stranger Jerry relentlessly pokes and prods, desperately seeking a connection of some kind. He forces Peter to question his safe, conventional lifestyle choices. After Jerry’s devastating monologue chronicling his desperately lonely existence, their meeting results in a fatal challenge. Paired with Samuel Beckett’s Krapp’s Last Tape in its original Off-Broadway premiere, this body-blow of a play asks disturbing questions on what it means to be a human being and how our materialistic society was changing our values.

Almost 50 years later, Albee wrote Homelife, a curtain-raiser to flesh out Peter who spent most of Zoo Story silently reacting to Jerry. Before leaving his Upper East Side apartment and running into Jerry, Peter has an uncomfortable dialogue with his wife Ann who is also questioning their cozy co-existence. Homelife is definitely the lesser work. It follows the same template of many of his later pieces: an erudite pair quibbles cryptically and repetitively over their choice of words before finally getting to the meat of the conflict which is usually, “We don’t get along, something’s missing, life is boring, boo-hoo.”
Fortunately, director Lila Neugebauer injects the same vitality into these uneven halves. On Andrew Lieberman’s stark, Jackson Pollack-splattered set, Robert Sean Leonard’s exquisitely repressed Peter, Katie Finneran’s delicately disturbed Ann, and Paul Sparks’ spectacularly unbalanced Jerry play a frightening three-side chamber piece of dynamic despair.

While Albee’s Zoo Story retains its impact after half a century, Jerry Springer—The Opera is way past its sell-by date. The satiric tuner opened in London in 2003, winning the Olivier Award for Best Musical and running 609 performances before touring the UK. Written when Springer’s tabloid-trash talk show was at its ratings zenith, Brits loved its characterization of vulgar Americans descending to the lowest cultural depths. But, apart from two performances of a concert version at Carnegie Hall in 2008, the work has not been seen on a New York stage until now. John Rando, stager of such wacky works as Urinetown and The Toxic Avenger, is the perfect choice for this bizarre sleaze buffet. His staging is fast and furious and the talented company—particularly Luke Grooms, Jill Paice, Tiffany Mann and Sean Patrick Doyle—combine skilled vocals with unabashed comic abandon.

The trouble is, in a world where a Twitter-obsessed, reality-show host is President of the United States, Springer’s vulgar antics are no longer shocking or particularly funny. Stewart Lee and Richard Thomas’s almost completely sung-through libretto offers parodies of a typical Springer slugfest with double-and-triple-crossing lovers, diaper fetishists, pole dancers, crack whores, and tap-dancing klansmen (a gimmick Mel Brooks previously used to better effect with Nazis in 1968’s The Producers and less so with the Spanish Inquisition in 1981’s History of the World, Part I.) Having a transgender character brag about an affair with redneck hetero fails to register as a surprise these days. After being shot by a guest just before intermission, Springer (a game Terrence Mann) descends into hell in the second act and hosts a grudge match featuring Satan (overplaying Will Swenson), God, Jesus, the Virgin Mary, Adam and Eve. Predictably, these combatants parallel those of the earthly first act and the no-longer-scandalous behavior becomes repetitive. Thomas’s score consists of simplistic operatic take-offs often repeating profanities (One number consists of variations on the “u” vowel in “fuck” for three minutes). It’s amusing once, but for two and a half hours? This once explosive hand-grenade of a show now comes across as an overlong and outdated SNL sketch. Kudos to Sarah Laux’s clever costumes, though.

Down the hall, David Rabe offers a more ambitious and sobering view of mass suffering. His new play Good for Otto focuses on the massive caseload of two stressed-out therapists at a rural Connecticut psychiatric center. Dr. Bob Michaels (earnest and intense Ed Harris) and Evangeline Ryder (flinty yet vulnerable Amy Madigan) work through the tribulations of half a dozen clients while battling insurance providers. We also get a look inside Dr. Michaels’ psyche where his mother (a sensitive Charlotte Hope), who committed suicide at a young age, wanders and all of his troubled patients cheerfully join in group singing of reliable favorites like “On Moonlight Bay” and “Let Me Call You Sweetheart.” Most of the play consists of therapy sessions with counselor and patient sitting in old-fashioned swivel chairs center stage surrounded by the cast and members of the audience seated amid Derek McLane’s accurately institutional set (Jeff Croiter’s warm lighting helps set the intimate, dream-like mood.)

Scott Elliott’s staging and the performances of the large cast are appropriately realistic, but at nearly three hours, the stories blend together and the play loses focus. Rabe needs a ruthless editor to separate the excess from the essence of his probing encounters. The shorter vignettes work best. These include a mother (an intense Kate Buddeke) afflicted by throbbing headaches after the sudden suicide of her drifter son (an affable, troubled Michael Rabe) and the attempts of the socially-challenged Timothy (insightful Mark-Linn Baker) to fit into society. (The Otto of the title refers to Timothy’s pet hamster with whom he gets along better than with people.) Sterling actors like F. Murray Abraham, Rhea Perlman, and Maulik Pancholy are trapped in overdrawn storylines.

While Rabe’s play rambles, Lindsey Ferrentino’s Amy and the Orphans at Roundabout’s Laura Pels Off-Broadway venue, is more tightly focused and moving. Her darkly funny family drama centers on three siblings, each with coping issues. Jacob and Maggie are grown up children in their 60s, unsure and insecure. Ironically, their sister Amy who has Down’s Syndrome, is the most centered of the three. She loves movies, has a job and a boyfriend. When their father passes, this mismatched family, along with Amy’s caregiver, the feisty Kathy, embark on a bittersweet road trip to his memorial.

Amy, based on Ferrentino’s aunt, is played by Jamie Brewer who also has Down’s Syndrome. She delivers an insightful and assured performance, sharply delivering Amy’s favorite movie quotes and her deceptively insightful observations of her confused brother and sister. Debra Monk and Mark Blum capture Jake and Maggie’s yearning resentment and need to be loved. Vanessa Aspillaga is a fiery cannonball as the opinionated Kathy while Diane Davis and Josh McDermott sympathetically play the trio’s parents in flashbacks. Scott Ellis’ direction skillfully balances Ferrentino’s bleak humor and compassionate pathos.