Eclipsed had a smashing run Off-Broadway at the Public Theater earlier this season and has moved uptown mainly on the strength of its star, Lupita Nyong’o who gave a luminous Oscar-winning turn in 12 Years a Slave and also graces the back cover of the Playbill in a glamorous perfume ad. Ironically, she eschews the Hollywood routine as a downtrodden victim of war and sexism. But this is far from a one-woman show. The rest of the all-female cast are equally intense and moving.

The blighted principal setting (Clint Ramos created the appropriately ragged sets and costumes) is a ruined hut in the midst of war-torn Liberia. Three women bicker, gossip, and bond as they wait to be called to sexually attend to the unseen rebel commanding officer. Taken as carnal prizes in a bloody civil conflict, they have lost their homes, families, and even their names, referring to themselves only as Wife #1, Wife #3, and The Girl. Wife #2, who appears later, has sought another avenue out of this hell by becoming a soldier. The fifth character, Rita, is a peace worker struggling to help the end the women’s degrading servitude. But Rita also has a somewhat melodramatic ulterior motive; she’s searching for her abducted daughter. Her storyline is the only extraneous element in Gurira’s otherwise well-observed script.

Nyong’o is heartbreaking as The Girl, detailing every step of her desperate attempts to escape her impossible plight, seeking to protect herself from the horrors around her. Watch as she joins Wife #2 in the army, rounding up young women like herself for the same fate. Nyong’o puts on the hard shell of a ruthless killer, but when confronted with imposing misery on others, she lets the emotional covering crack open, revealing the tender soul underneath. Saycon Sengbloh captures the wounded pride of Wife #1 who takes on the mantle of mother figure for both the wives and the commander. Zainab Busia brilliantly blusters and bristles as the war-like Wife #2 but also displays brief flashes of her buried humanity. Pascale Armand is a sparkplug of vitality of the spunky Wife #3. Akosua Busia makes of the most of the dramatic-device role of Rita.

Eclipsed sounds like a dark devastating night in the theater, but Gurira, and director Liesl Tommy have also injected plenty of leavening laughter, much of it derived from the women reading and commenting on a biography of Bill Clinton. These various elements and observations, along with Tommy’s balanced direction, make for a multilayered portrait of women swept up in a tidal wave of despair and doing their best to swim rather than sink.

Blackbird, a gut punch of a one-act, is not as richly varied. Presented in 2007 Off-Broadway by Manhattan Theatre Club with the same director (Joe Mantello) and lead actor (Jeff Daniels), this new Broadway edition starts at a screaming pitch and has nowhere to go. Daniels plays Ray, a 50-ish office drone confronted with a ghost from his troubled past—Una, the young woman he had a brief affair with when she was 12. In the bland break room at the dental supply company were Ray now works (realized with grey corporate accuracy by set designer Scott Pask and lighting designer Brian MacDevitt), Ray and Una replay their twisted relationship which ended in a jail sentence for him and a dysfunctional adulthood for her.

The original Off-Broadway production gradually built to a crescendo of pain and loss, but Mantello turns the decibel level all the way up, so the impact is not as devastating. Daniels modulates Ray’s compulsive obsession somewhat but Michelle Williams goes way over the top from her first entrance. She delivers a studied, actress-y performance with little honesty and too much hysteria. Only during her long monologue describing the characters’ pathetic tryst are there moments of verisimilitude. Then we feel as if we are listening to a broken girl’s plea for help rather than sitting in a theatre watching a movie star dine on the scenery. 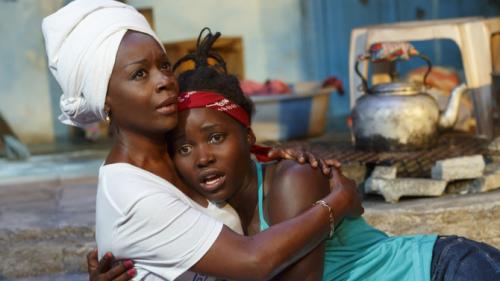 Originally Published on March 19, 2016 in ArtsinNY.com