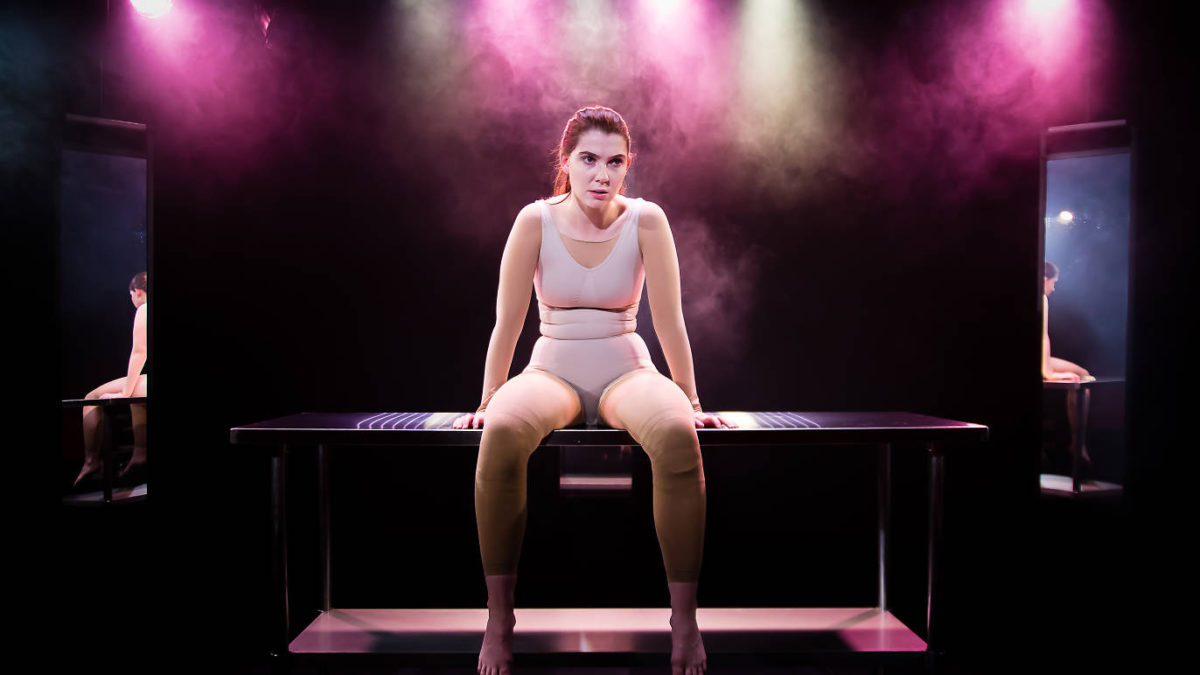 Here, in Dust, Thomas speaks to us from the morgue. She’s been dead for three days. And as she looks back now, her ruminations carry us with her into the depression that entombed her everyday world.  To listen to her story of self-hatred – the diets she forced on her body, the way she obsessed over her physical appearance, not to mention the way young men used her for it – sounds like the rantings of a “typical” victim.

Given her outcome, the quotidian manner in which Thomas highlights the ordinary events of her life should seem odd to an audience. Over the course of her 70-minute monologue, her understated performance builds to a fever pitch. Death isn’t what it’s cracked up to be, or at least, it doesn’t fulfill Thomas’ quest.

Graphicly physicalizing the blow jobs she’s choked on, and the intercourse she’s had with her boyfriend, defies congratulations. Her behavior, and her submissiveness make her feel sick.

Her earnest refrain, “I stayed with you because I was afraid of being by myself,” sounds too plaintively familiar. In this regard, she becomes an everywoman. The fact that she cuts herself takes it a step beyond.

Max Perryment’s sound design serves as the lightening rod, carrying the piece from moment to moment. There are eerie psycho sounds, a cacophony of chattering voices mixed into electronic jitter, and music that would befit Alice looking through a looking glass.

Life interrupted is a reality for Alice, as it is for many women. Depression kept her from being able to live. To her family and friends, she appears to be nothing more than a slacker, incapable of earning money, and taking care of herself.

At her funeral, her mother reads the lyrics from Alice’s favorite song. But that song expresses the longings of a 15-year-old, Alice opines.  Her dope addled, brother, racing to the pulpit, speaks his eulogy. “I don’t know where being depressed ends, and being a cunt begins,” he screams.

But the quip Ben, her boyfriend read on Tumblr, speaks eons, “There’s a time when your parents put you down when you’re a kid, and they never pick you up again.” In death, she misses hugs, and hugging, swimming – not really. It’s simply happiness that is lost, and never regained.