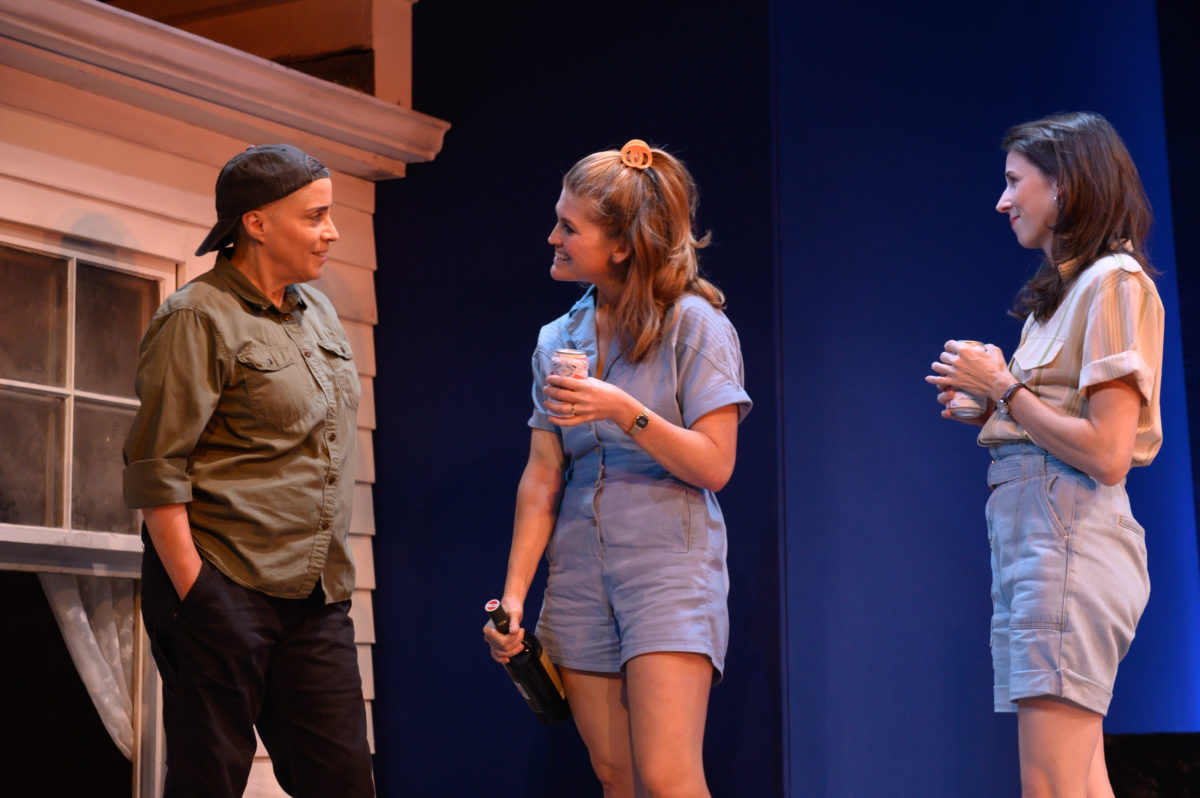 The eponymous Dr. Ride is Sally Ride (1951-1912), a physicist who, in 1983, was the first American female astronaut to travel into space, aboard the spaceship Challenger. Ride is referenced in the play but doesn’t appear until a fantasy sequence, set in the titular beach house, that closes the play. Everything that precedes that scene takes place on the roof of a St. Louis, MO, house called the Ivan Brock House, named for a local poet. Since the Internet gives me no help, I’ll assume until corrected that he’s as fictional as the characters in the play.

Chief of these are two women in their 30s, waitresses named Matilda (Erin Markey) and Harriet (Kristen Sieh), friends since Catholic high school days. Each has poetry writing pretensions, which they pursued in grad school before ending up in their dead-end jobs. They’ve formed the Two Serious Ladies Book Club, naming it for a novel by Jane Bowles, hoping at first to enliven St. Louis’s cultural life but quickly abandoning that idea.

It’s June 17, 1983, and they’re holding a meeting on the roof of the Ivan Brock House (designed by Kimie Nishikawa, with a large skylight at center), near the Mississippi, although there’s no book to discuss. (Sightline warning: the unraked auditorium may make you crane your neck to see between the heads in front of you.) In fact, the friends debate whether or not they (or Matilda, at any rate) even likes reading.

Their chief purpose is simply to shoot the breeze, drink beer, share a single cigarette, and stare at the neighbors through binoculars as they listen to the radio countdown for the next morning’s Challenger launch. The main ground rule (which will be broken) is that men aren’t to be discussed. Their small talk concerns trivia, like who’s the smarter or the more fascinating of the two, and hints that Harriet, her dreams of writing poetry stalled, would like to flee her job and St. Louis.

They also talk about Sally Ride and another woman, Molly Tyson, a friend of Ride’s—an early lover, according to the Internet—about whom we learn a fact or two (she taught Ride about Shakespeare) and who will figure later in the play’s ambiguous conclusion. Harriet considers herself Sally to Matilda’s Molly.

None of the discourse is especially compelling, but it contributes to the hazy sense of an incipient lesbian connection between Harriet and the more physically affectionate Matilda. Harriet, whose mother is dying in hospice care, has a male lover—a feckless grad student named Luke—and Matilda is married to a man named Arthur, although not too happily, and has a sick daughter at home to whom she keeps saying she has to return.

Lesbianism is further highlighted by the arrival of Meg (Marga Gomez), a disillusioned nurse, presenting as butch in a mullet haircut and Motörhead t-shirt, who joins the book club at Matilda’s invitation. Meg’s presence, which opens the talk up a bit to include poetry and the difference between facts and opinions, leads to the revelation that Ride (who was married at the time) is a lesbian, which may be an anachronism since Ride’s sexuality was not yet known to the public.

Finally, there’s Norma (Susan Blommaert), the middle-aged woman who maintains the house, scolding Harriet for letting her air conditioner drip onto the walkway or for leaving a window open (the passageway to the roof) so that flies can get in. Norma, by playwriting coincidence, is queen of the ant colony studied aboard the Challenger.

Very little other than the bantering interplay between the women occurs, with barely any conflict and nary an emotional explosion, although the arrival of a piece of significant news eventually alters the dramatic temperature. Now and then, Matilda bursts into song (with Harriet sometimes joining in). Having starred as Annie Oakley in a high school production of Annie Get Your Gun, she even does a full performance of “Moonshine Lullaby.” Meg, for her part, blasts a heavy metal number on the cassette player. Ben Williams did the sound design.

The closest we get to anything interestingly dramatic is when Harriet recounts a sexual adventure with a Harley-riding man she met the previous weekend when she visited her dying mother at a Florida hospice. Harriet rationalizes her talking about a man by declaring “He is an object and I am the subject. He is the, the, commodity and I’m the—” (consumer?). In her story, whose ramifications continue to grow as she returns to it later in the play, she revels in how she exerted her sexual power over the man, something she’s obviously not done before, and which has liberated her.

A trip on the man’s bike led to her viewing the beach house maintained by NASA for its astronauts. This experience of seeing the place where Ride was not only staying but eating barbecue (the image of hunger runs through Harriet’s lines) establishes the basis for her to make a life-changing decision, one that will include, of all people, Meg.

Finally, the play, until now realistic in style and material, switches into a surrealistic mode. The lighting (designed by Oona Curley) changes to something eerie and what we see reminds us of an earlier scene when Matilda and Harriet talked about which of them was like Sally Ride and which like Molly Tyson.

Birkenmeier’s play has several effective moments but, loosely structured as it is, the stakes rarely seem particularly high. The most affecting moments, in fact, don’t happen in the play but are speeches describing things that happened in the recent past. And the final scene—describing it would be a spoiler—is unsatisfactory because it seems more a gimmick than an organic outgrowth of what it follows.