November 18, 2022: In Downstate, Bruce Norris’s invigoratingly provocative new play at Playwrights Horizons—previously seen at Chicago’s Steppenwolf Theatre and London’s National Theatre—four paroled pedophiles cohabit at a group home in downstate Illinois. Each is tethered to the authorities by a GPS ankle bracelet that monitors their movements. Responsible for overseeing their behavior is a humane, wearied, but nevertheless tough as rawhide, middle-aged female parole officer named Ivy Delgado (a hard-hitting Susanna Guzmán). 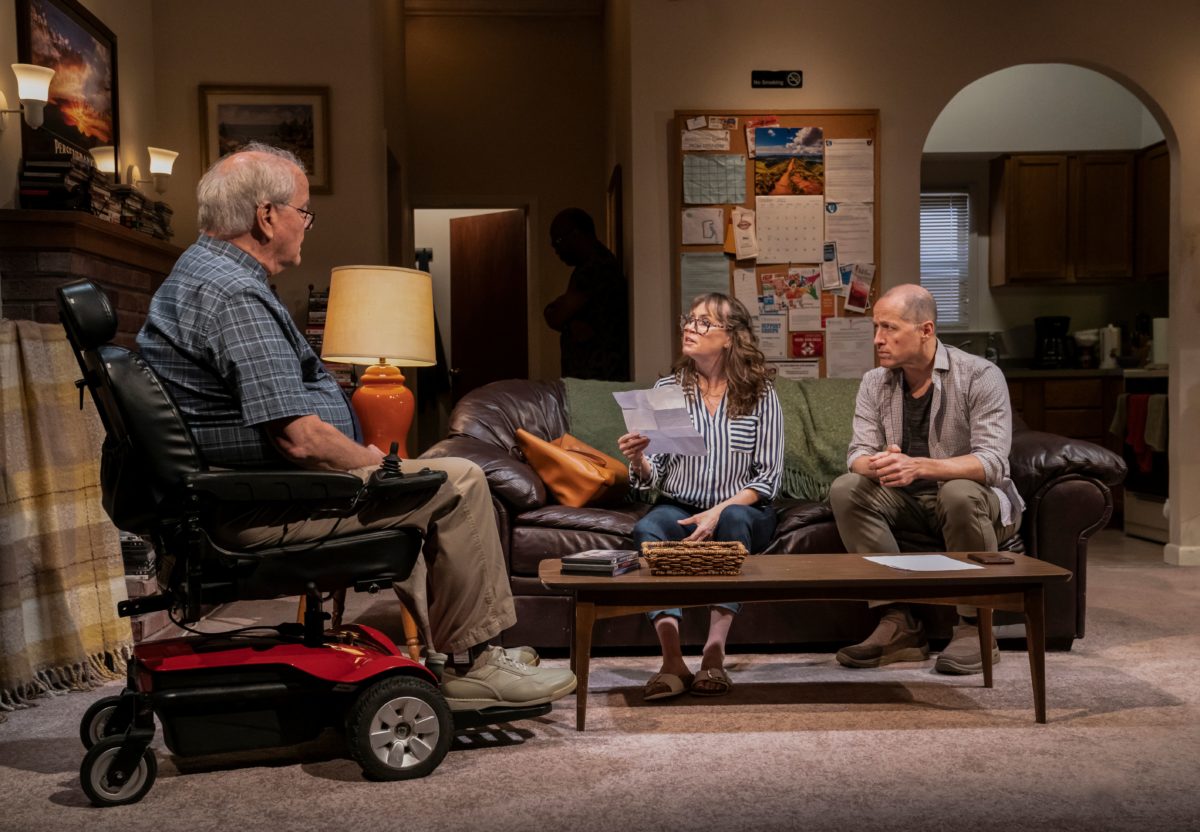 November 18, 2022: In Downstate, Bruce Norris’s invigoratingly provocative new play at Playwrights Horizons—previously seen at Chicago’s Steppenwolf Theatre and London’s National Theatre—four paroled pedophiles cohabit at a group home in downstate Illinois. Each is tethered to the authorities by a GPS ankle bracelet that monitors their movements. Responsible for overseeing their behavior is a humane, wearied, but nevertheless tough as rawhide, middle-aged female parole officer named Ivy Delgado (a hard-hitting Susanna Guzmán).

Over the course of two and a half hours, the audience contemplates the relative decency or perversion of these allegedly evil men; the great constraints under which they’re forced to live as sex offenders, not only by legal restrictions but the demands of neighborhood pressure groups; the different forms and degrees of pedophilia they represent; and, among other things, distinctions between victimhood and victimization that are not necessarily what you might expect. As for specifics regarding what transpired with the children, Norris holds little in reserve.

Mr. Norris (Clybourne Park) can’t quite avoid a few of the pitfalls of conventional well-made playwriting, and not everything rings completely true. Regardless, Downstate, staged with knockout power by Pam McKinnon, is a sturdily written, sensitively handled, exceptionally well-acted, and thoroughly engrossing confrontation with an unpleasant subject from which it’s difficult to divert your eyes. Contrivances, like what we might call Chekhov’s bat, and even a long coil of extension wire, play their role, and both a climactic blowup and a big reveal can be sensed way in advance, yet the play clings like a magnet and never lets you go.

Fred (Francis Guinan, beautifully modulated) is a soft-spoken, mild-mannered, even kindly, Chopin-loving gent in his 70s, confined to a motorized wheelchair. As a piano teacher, he molested his pre-pubescent male pupils, for which he feels regret. Or says he does. Dee (K. Todd Freeman, consistently authentic) is a gay black man, a former theatre performer devoted to Diana Ross, and now and then given to flashes of flamboyance. He was sentenced to fifteen years for having a two-year relationship—he insists it was a love affair—with a boy who was 14 when they met. The boy stayed in touch with him by mail for six years afterward. The most grounded and knowledgeable of the residents, Dee serves sometimes as the play’s apologist and raisonneur. As played by Mr. Freeman, you may even catch yourself inclining toward Dee’s justifications.

Gio (Glenn Davies, histrionic TNT), who works at Staples, is a loud, temperamental, motor-mouthed go-getter, a man who quotes the Scriptures fluently and holds entrepreneurial ambitions despite having nothing specific to sell. His crime: having sex with an underage teen girl. Finally, there’s Felix (Eddie Torres, convincingly crushed), a mechanic who molested his daughter when she was young. He agonizes tragically because the limits on his freedom prevent him from having any contact with her as her fifteenth birthday approaches. A ban on internet use and smart phones makes life hard for everyone, but Felix in particular.

As such thumbnails reveal, none of these men fits the stereotype of the creep who lurks in the bushes to steal children so they can be locked in basements to serve as sex slaves. Each, even Gio, the most obnoxious, was arrested for a single infraction. To what degree, the play seems to ask, do the punishments these men received—and still do, considering the limits on their freedom—fit their crimes?

The outside world intrudes mainly in the presence of Andy (Tom Hopper, artfully navigating a difficult role from introverted to explosive), a white man in his 40s, who, at 12, was one of Fred’s victims. He has come to confront his molester and get him to sign a document detailing his transgressions, even though Fred’s on parole after having served his time. Andy continues to suffer the trauma of his brief childhood experience; he belongs to a survivor’s group that, apparently, has made him almost professorially well-versed in the subject of child abuse.

However, it takes some time for him to express himself well on the subject since, when we first meet him, he seems painfully hesitant and inarticulate when sitting next to his abuser. In the second act, however, when he engages in a long, polemical discussion with Dee, he sounds almost like a professional advocate for those who have been abused.

We must ponder the question: how much is actually resolved of Andy’s trauma by having Fred sign a paper admitting what he’s already admitted? In fact, Fred, otherwise so ready to comply, insists that the list of alleged improprieties provided by Andy is incorrect, suggesting that what Andy remembers may never have happened, or, at least, not in the same way.

Two minor characters are involved. One, Effie (a hotwired Gabi Samels), is a confrontational woman friend and co-worker of Gio’s; despite her generally crude demeanor, she has no trouble fully enunciating her rights in the face of Ivy’s official demands. The other is Em (Sally Murphy, saddled with the weakest role), Andy’s wife, who is given a speech at the end castigating the parolees that seems artificial and out of place.

Depending on who’s talking, Norris’s dialogue ranges from the commonplace to the sizzling, but nearly everyone manages to be ultra-articulate, regardless of educational background. Fiery scenes are often peppered with laugh lines, and each moment has something about it to grab your attention. You probably never met such a team of verbally precise, yet emotionally disparate people, but what they say is usually so ear-catching you wouldn’t have it otherwise.

Todd Rosenthal’s set, less shabby than Norris describes it in his stage directions, is a blandly realistic beige interior that could serve for any number of households. Seated on audience right, however, I could not see a bullet-damaged window on the stage left wall. Clint Ramos’s costumes satisfy all the naturalistic, character-revealing requirements, and Adam Silverman provides the appropriately flat illumination needed to de-romanticize the environment.

Like the small number of other good plays about pedophilia (How I Learned to Drive and Doubt among them), Downstate can make you cringe one moment and laugh the next. But what it does better than anything is make you feel and think.