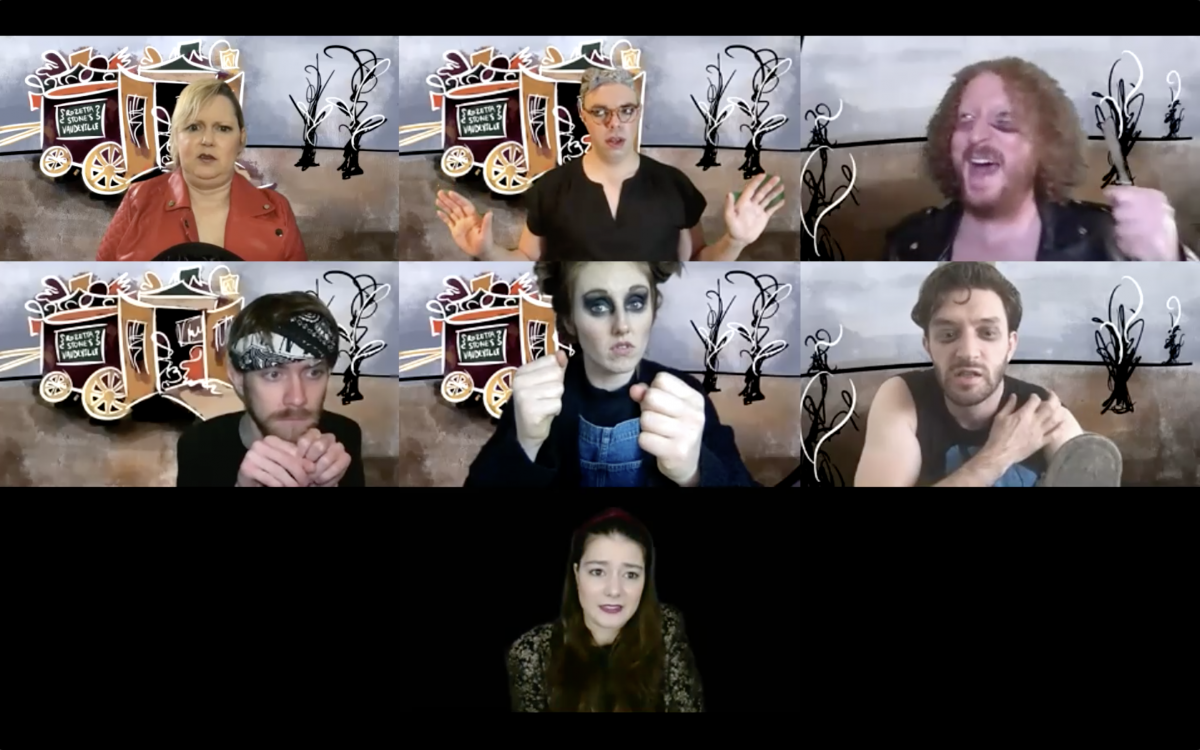 Vaudevillians performing as they go, Zetta travels on foot with her Dog (William Ketter) from a post-apocalyptic America to China.  (The characters speak English so we can tell it’s America.) Directionless really, they’re beset by two survivors and two scavengers. It’s a competition just to stay alive.

While written prior to the COVID-19 pandemic,  Adams’ tragi-comedy takes us on a hegira to our current dilemma. Morphing a desperation for survival without food or nutrition with daunting weather and a man who acts like a dog – the path from the Golden Age to the final blast of the Plastic Age is inescapably obvious.

That it all comes to life on Zoom is the ingenious work of the show’s creators, director Erin Cronican and designers Brandon Walker and Laura Bonacci. As the play opens we see Zetta in conversation with Dog, but they don’t look at each other. At least, from the audience perspective, Zetta is perched directly above Dog and their communication is directly to us. We’re confronted by their isolation.

Still, each of the six cells or windows – one per actor on Zoom, are sewed together by a common backdrop. A scorched earth with squiggly things that look like dead trees or twisted paperclips attach earth to a blue-grey sky (Laura Bonacci). Our Narrator (Weronika Helena Wozniak) sits below in a black hole – a hell of her own making, apparently.

Even more challenging, however, is the sound design. It’s a rule on Zoom that only one person can speak at a time. Two speakers drown each other out. In this case, however, characters sing together and at times speak or sing to background music (arrangements by Brandon Walker). Technology-wise it’s highly innovative.

Watching this work of metatheatre played out by these resourceful actors in a technology that is not intended to replace the stage, makes for uproarious fun. As the Dog, Ketter scratches his ear and rubs his bearded face. It’s odd that his physical actions actually sound like a dog’s. Otherwise, he’s a soulful young man, accused of crimes against humanity.

Robin Friend as Bud, one of the two scavengers, plays the role as if he were a Shakespearean actor, while Coke (John L. Peacock) explodes so obscenely it evokes atrocity…the atrocity of a man who is artless, that is. Together the two create the physical reality of wrestling even though they can’t touch. On Zoom it resonates with feverish grit. A duo, akin to Vladimir and Estragon in Waiting for Godot, these two clowns could kill to eat…you know who.

Similarly two travelers, Vera (Brandon Walker) and JoJo (Hailey Vest), also performers and Vaudevillians, happen upon Zetta, her guitar-playing Dog and their cart filled with costumes and props. For Vera and JoJo the prey is that cart for which they would kill…guess who.

Walker (I Am My Own Wife by The Seeing Place) is a gender fluid actor playing a female role; the character itself is brutal. And It’s riveting to watch how freely the actor moves within the confined space on Zoom.  Theatrical gestures and large hands explode on screen. And the image of a large nose and big red lips in full focus is explosively comic.

Vera’s counterpart, JoJo, however, transforms from a brutal villain under Vera’s influence, to a person who saves the lives of others. If there is a note of triumph in the end, it includes JoJo’s recognition that she can be the master of her own destiny.

Adams’ fascination with language is the big tease that these performers mine. They speak of “terrible surprising deaths,” “the rise and fall of humanity.” Later the Vaudevillians enact a story about the plagues god sent, describing the plague of “ideas…of flag waving, border raving killer toads, of neighbors…and of slaughter.” A picture of a dystopian world.

Catch it while you can! Streaming on Zoom, Dog Act performs live Wednesday, February 3rd at 7:00 pm EST/4:00 pm PDT (with streaming available until Midnight the same night 2/3/21). Tickets and information are available at  www.TheSeeingPlace.com or by calling (866) 811-4111