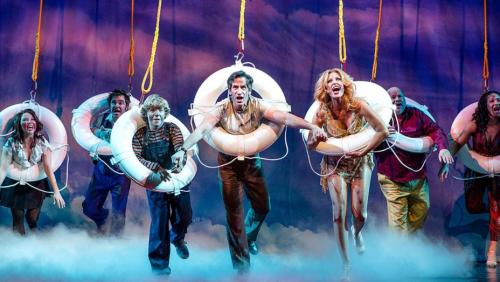 Disaster! sails into Broadway’s Nederlander Theater after two previous Off-Broadway voyages. The basic concept sounds as if it might work for a 15-minute TV sketch: Throw together elements from such 1970s crash-and-burn epics as The Poseidon Adventure, Earthquake, and The Towering Inferno, and a slew of pop and disco Top 40 hits from the same era, and hope for laughs. While there are some slow spots in the book by Seth Rudetsky (who also appears in the cast) and Jack Plotnick (who also directs), they are remarkably few. Most of Disaster’s humor comes from the absurd shoehorning of the songs into its zany plot—such as the “ooka-chaca” opening from “Hooked on a Feeling” supplied by rescue helicopters and “Muskrat Love” denoting rabid rodents about to attack cowering passengers. There’s even a clever use of “Nadia’s Theme,” the instrumental tribute to the beloved Russian gymnast.

The kooky material is given its best possible treatment by a seasoned cast displaying clockwork timing. A slew of Tony winners and nominees expertly plays a shipful of stereotypes including the low-class casino promoter (razor-sharp Roger Bart), his ditzy lounge-singer girlfriend (delightfully daffy Rachel York), a heartbroken hearthrob waiter (sexy and full-voiced Adam Pascal) and his former love, a gutsy reporter out to expose the dangers of the ship (cute and incisive Kerry Butler). Rudetsky gets in some zingers as a know-it-all scientist determined to prevent the inevitable explosions and fatalities.

Even amid this expert company, there are a few stand-outs. In the Shelley Winters role of a good-natured matron dying of a weird disease, Faith Prince mines comic gold from the character’s schtick symptoms of uncontrollable pelvic thrusts and cursing at inappropriate times. She also leads one of the funniest numbers, tap dancing life-saving information in Morse code to “A Fifth of Beethoven.” (Unfortunately, Kevin Chamberlin as her jolly husband is given too little to do, as is Max Crumm as Pascal’s pal who gets bumped off early in the second act.) Young Baylee Littrell deftly switches genders as opposite-sex twins and Lacretta Nicole displays impressive pipes as a down-on-her-luck disco diva.

But the real star of this shindig is Jennifer Simard as a glum nun set on saving souls as her gambling addiction kicks in. Simard, who has been toiling Off-Broadway for nearly two decades, gives a brilliantly deadpan performance, delivering every line with the clouded darkness of a miserable soul yearning to find release amid the gaming tables. She can make falling down (with exaggerated stiffness) or just looking at another actor (with blank incomprehension) riotous. Her ecstatic rendition of “Never Can Say Goodbye” to a slot machine is the comic highlight of the season and I am praying she gets to perform it on the Tony Awards.

Is Disaster! the most brilliant musical in years? No. But it is a goofy, silly ride transforming the Nederlander into a joyful amusement park.

As noted above, there’s a real swimming pool onstage at New York Theatre Workshop for Red Speedo but it’s not a source of fun like the crazy ship in Disaster! Designer Riccardo Hernandez’s magnificent environment provides the setting for a brutal examination of the cravenness of the modern sport scene in particular and America in general. 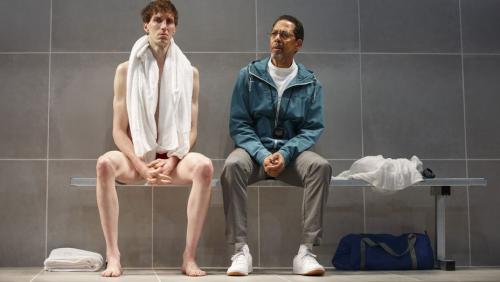 Swimming champion Ray may be implicated in a doping scandal just before the Olympic trials and a lucrative endorsement deal. His brother and manager Peter, who is heavily dependent on Ray raking in Speedo money, desperately attempts to keep the situation under wraps while Ray’s coach threatens to go public. Meanwhile, Ray wants to get back with his ex-girlfriend, sports therapist Lydia whom Peter deeply mistrusts and who may have supplied Ray with the illegal drugs.

As with his earlier plays, The Christians (seen at Playwrights Horizons earlier this season) and Death Tax (presented at Actors Theater of Louisville a few years back), playwright Hnath constructs an intricate web of needs and counter-needs with the four players each battling and scheming to come out on top (the quartet of actors deliver sharp piercing work). Lurking underneath the surface waters of the plot is a bitter indictment of our winning-at-all-costs culture. Peter has a particularly scary monologue, delivered with just the right amount of off-handed arrogance by Lucas Caleb Rooney, justifying his dishonesty and avarice for the sake of his young daughters. (“Because poor kids have it so rough,” he rationalizes.)

Hnath’s script and Lileana Blain-Cruz’s direction are as lean and muscular as the bare torso displayed by Alex Breaux who gives a deceptively complex rendition of Ray, balancing the athlete’s apparent guilelessness with a cunning and aggression as ruthless as his sibling’s. When the two clash in an ugly climactic fist fight (staged with gut-wrenching detail by Thomas Schall), this depth charge of a play hits you where it counts.