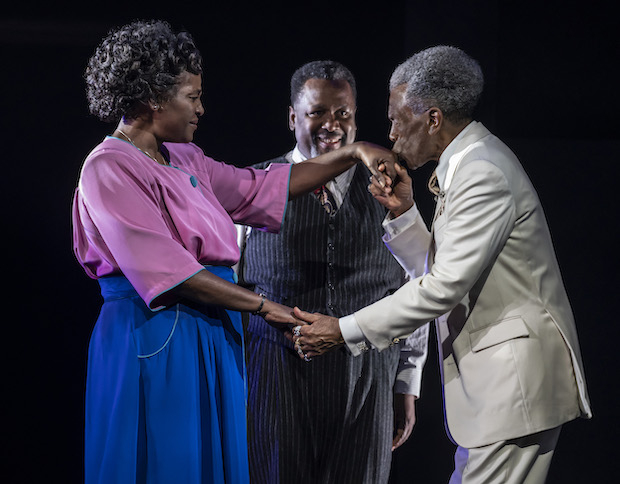 Turning the story of a white salesman’s failure to achieve the American Dream into the tragedy of an African American salesman in the same situation is an idea filled with possibilities. But these possibilities have to be fulfilled by the characters themselves and not by overlaid implications of racism. Willy Loman may be a victim of our society’s screwed up values, but he has no one but himself to blame for his poor decisions. If Willy’s problems are related to racism, we are watching a very different play.

There is only one scene in which director Miranda Cromwell is able to make a comment on race, and that is only by warping the intention of the playwright. When Willy asks his boss, Howard (Blake deLong), who has now taken over the reins of his father’s company, for a job that won’t call for traveling, Howard humiliates him.

Howard even makes Willy pick up the cigarette lighter he has dropped. This is a new piece of business invented by Cromwell, who is determined to leave nothing to our imaginations. The Howard created by Miller is certainly callous, but he is not cruel. And the racist implications are not justified by anything anyone else says about Howard or his father at any other time in the play.

However, the real problem with this revival is not its racial message but Cromwell’s decision to infuse the play with the cheap, surface humor of sitcoms. Humor has always been and should always be present in tragedy and other serious drama, but that humor should not diminish the characters in the eyes of the audience or take away from the gravity of the playwright’s message.

In this Death of a Salesman, if it’s hard to take the mugging Wendell Pierce seriously, certainly it’s even harder to care about the two clowns that are his sons: Khris Davis as Biff Loman and McKinley Belcher as Happy Loman.

Sharon D Clarke is a traditional Linda Loman, but Willy’s steadfast wife is such a poorly written one-dimensional character even the best actor cannot make her interesting. André De Shields, as Willy’s adventurous and successful brother, Ben, is his usual wonderful self, but seems to have flown in from some other play and has no relationship to the other characters onstage. Nevertheless, he enlivens every scene he is in.

So, what works in this production? Femi Tenowo’s music is totally in keeping with the mood of the play and quite beautiful in itself. And Anna Fleischle’s set is both evocative and functional, spare but perfect for the scenes that exist in Willy’s mind as well as those that are painfully real. But that is hardly enough.

This Death of a Salesman may indeed be a crowd pleaser. Its humor makes the medicine go down quite smoothly, and the medicine is exactly the kind that makes us feel a lot better. But it has little of the universality and humanity of Miller’s original play.