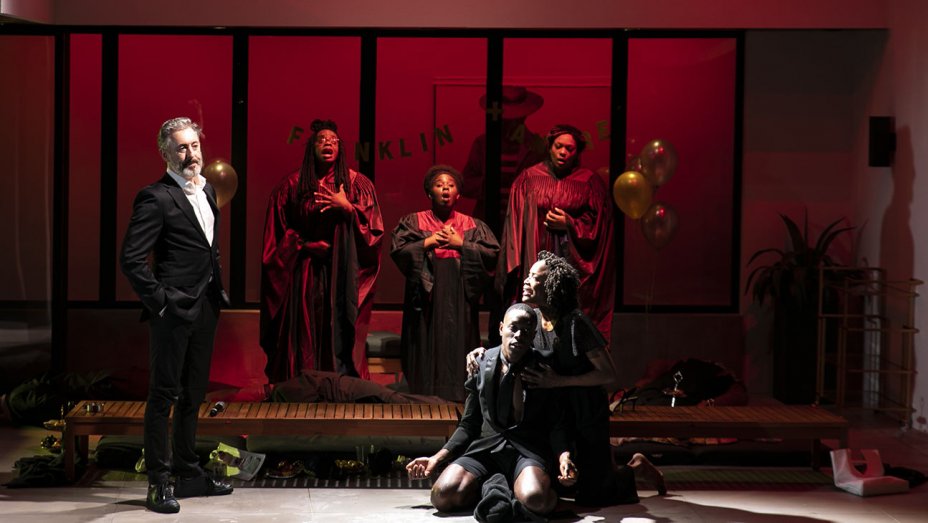 Great choice of words! “Booty,” a slang expression for black ass, it speaks to what matters in Franklin’s world, and at the same time to Andre’s fetishism.  But, in spite of all their talking, they don’t share a lot of tangible information about themselves… who they are, where they come from, what they do, etc.

We learn that they met at a club, and we see that things started happening very quickly after that. Andre showers Franklin with presents; they take drugs, have sex in Andre’s swimming pool, and talk about having sex, while Franklin noticeably squirms at Andre’s prurience, his spankings, and persistent aggression.

Surrounding the central couple are Franklin’s friends, the ultra-cool, air head Bellamy (Kahyun Kim), and the obnoxious, and apparently jealous, Max. As played by Tommy Dorfman, he is the most reasonable character here, as he recognizes that there is something seminally wrong with Franklin’s new relationship.

In addition, a Gospel Choir (Carrie Compere, Denise Manning, Onyie Nwachukwu) appears at the height of Andre’s sexual advances, and underscoring Franklin’s cries for his daddy. That these actors/singers also double as domestic help, and artist assistants brings to mind Tony Kushner’s musical, Carolyn or Change.

The Gospel singers represent an essence of African American culture in domestic, and family life. That connection is clearly made when Franklin’s mother, portrayed by the beguiling Charlayne Woodward arrives, megaphone in hand, leading the singers into Andre’s pool. It’s a riot, as if the high priestess, mom, still needs to baptize her son, to win his obedience. Sadly, he rebuffs Zora’s efforts to rescue him from Andre’s narcissistic, possessive, and usurious ways.

As Franklin spirals downward from a sensitive, self-questioning young artist to feeling rubbed off, and lost, his art work also evolves into frightening, life-size representations of himself, Andre, and his mother. But these soft sculptures look primitive, and typical of early folk art, conceivably the work of American slaves.

Regardless, the overwhelming impression that one is left with is a scathing indictment on the way gay men live, and specifically the dyad of the older man/younger man. In spite of Montana Levi Blanco’s imaginative, upscale costumes, Andre prefers nudity. And Franklin is an exquisite looking youth, naked or clothed.

The production, interestingly, is helmed by a gifted female director, Danya Taymor.

All of the action takes place in, and around the swimming pool outside Andre’s contemporary fortress of a home (Matt Saunders). In fact, the production values are so high end, it looks like it was produced by Netflix, for the stage.