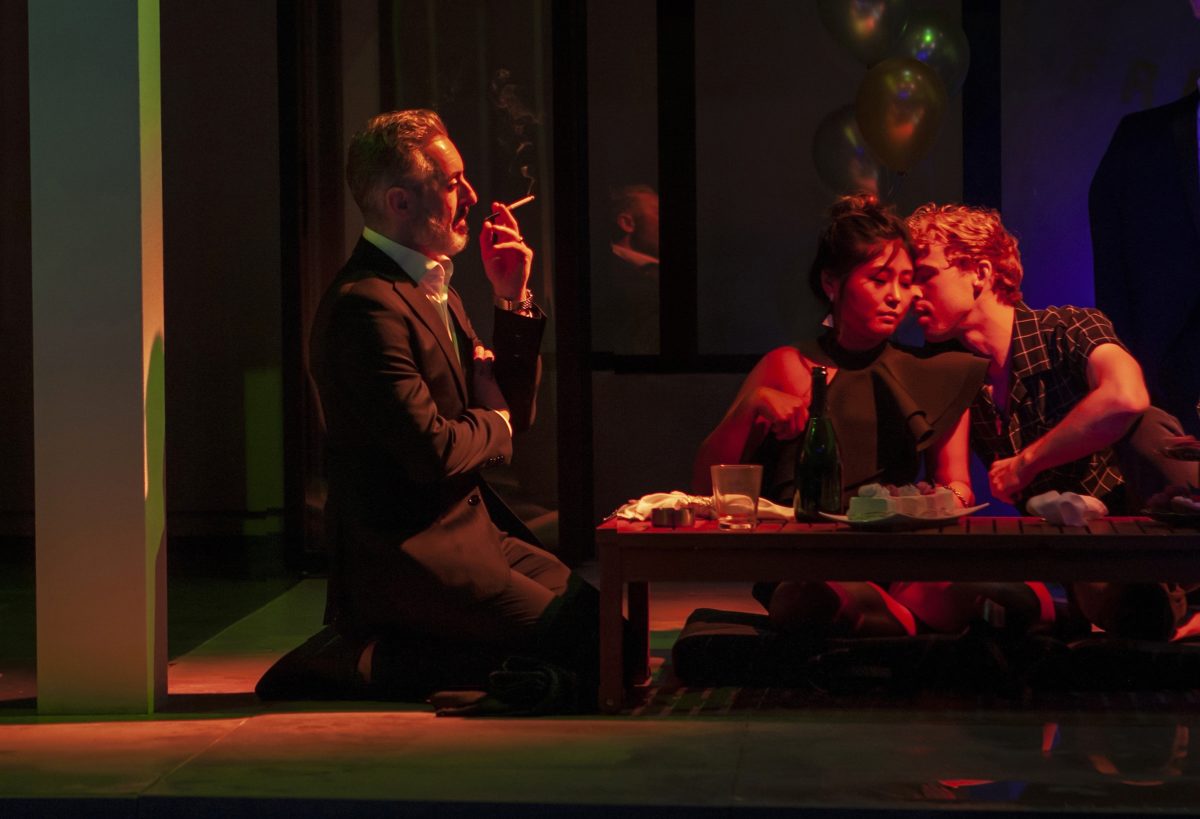 Subtitled a melodrama and co-produced by The New Group and The Vineyard Theater, “Daddy” starts off focusing on the autumn-spring romance of struggling African-American artist Franklin (an amazingly emotive Ronald Peet) and fabulously wealthy, white, 60-ish art collector Andre (sharp and sly Alan Cumming). But as the play’s lengthly three acts proceed, the center shifts to the battle between Andre and Zora (passionate and precise Charlayne Woodard), Franklin’s deeply religious mother, for the young man’s soul. Zora doesn’t seem to object to her son’s homosexuality, but there is something she doesn’t like about Andre, but can’t quite put her finger on it.

That’s the essential problem with the play. Harris wants to probe the power dynamic in this unusual triangle, but he can’t quite put his finger on the essential conflict. Evidently, Franklin has deep unresolved father problems, Andre has a sadomasochistic streak, and Zora is still enraged at her son’s father who deserted the family decades ago. None of the three emerge as totally three-dimensional beings, particularly Andre who is not developed much beyond being rich and controlling. It isn’t until the final 20 minutes that Harris weaves these threads into a cohesive whole and offers some clarity as to their meaning in a larger context. Zora delivers a moving speech (splendidly done by Woodard) about the fraught relations of African-American fathers to their sons but it’s too little, too late. Plus all these incredibly impactful clashes are resolved too neatly and quickly, as if Harris realized he’d better wrap things up before hitting the three-hour mark.

There are many noteworthy elements in the production and script, such as Harris’ witty sketching of the Los Angeles art scene (embodied by the vapid gallery owner Alessia played with wit by Hari Nef) and Franklin’s airhead friends, pretty boy actor Max (funny Tommy Dorfman) and fashion-and-Instagram obsessed Bellamy (Kahyun Kim in a touching turn, exposing her character’s shallowness and vulnerability almost simultaneously). Danya Taymor’s insightful, yet outsized direction turns this confusing melodrama into a grand opera with many musical numbers (George Michael’s “Father Figure” is the most significant, of course) complete with a gospel trio (magnificent vocals by Carrie Compere, Denise Manning, and Onyie Nwachukwu) and an onstage swimming pool (Matt Saunders created the envy-inspiring, luxurious Bel Air set). Front row audience members are provided with towels to dry off after the actors have gotten them wet. There’s plenty of splashing, singing, and embellishments in “Daddy”—including the pretentious quote marks in the title referring to Franklin’s gallery show of ironic African-American dolls—but not enough meaty drama. Still, Harris has a vital voice and is a talent to watch.

Alice by Heart, the latest theatrical adaptation of Lewis Carroll’s children’s classic, similarly shortchanges characterization and depth for gimmicky effects. Featuring a rock-tinged score by Duncan Sheik and Steven Sater of Spring Awakening and a book by Sater with director Jessie Nelson, this musical places the Wonderland world in London during the blitz of World War II. Edward Pierce’s dank set depicts an underground subway station converted into a hospital ward. To escape the din of Nazi bombs and the impending death by tuberculosis of her sweetheart Alfred, young Alice Spencer recreates the Carroll work in her mind with her fellow patients, pompous doctor and domineering nurse as the fantastic inhabitants.

It’s an intriguing conceit but Sater and Nelson’s book barely establishes the characters so there is no emotional investment in their desperation to retreat from reality. Also the rationalization for Alice acting out the story by heart is not very strong—the nasty nurse who later turns up as the shrieking Queen of Hearts (surprise!) tears up the book of Wonderland in a fit of pique. Sheik and Sater’s score features some sweet and stirring songs and Nelson’s staging does include some novel images such as the stuffy doctor transforming into the Jabberwocky with arms made of rifles and crutches. But the sameness of the concept grows repetitive. With each fantasy sequence, Alice’s actual woes creep in, she and Alfred (as the White Rabbit) freak out, end scene, fade to the next similar scene.

Molly Gordon displays a lovely, dark voice conveying Alice’s deep ache of yearning and Colton Ryan is an appealing Alfred. Andrew Kober is a sweetly melancholy Mock Turtle, Noah Galvin a campy Duchess, Nkeki Obi-Melekwe a sleek and mysterious Cheshire Cat, Grace Mclean a scary Queen of Hearts, and Heath Saunder a cool, hookah-smoking Caterpillar. But even at 90 intermissions minutes, this Alice is a tedious, less than golden afternoon.