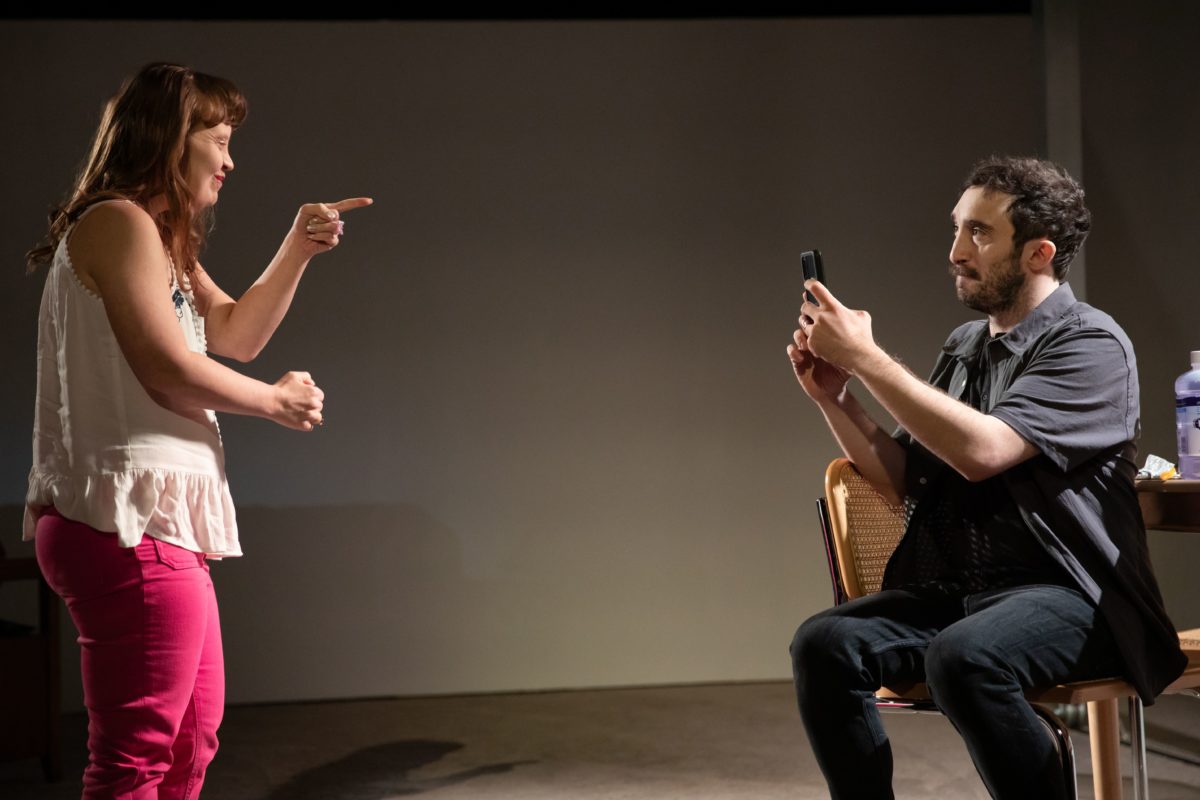 Jamie Brewer, Will Dagger in Corsicana.

One could just feel the urge among one’s fellow theatregoers to salute this 68-year-old artist’s achievement with a burst of applause on her entrance, something she may rarely, if ever, have experienced in her long career. But when the time came, her entrance was a soft one, meant to bring her on as quietly as possible to take an unobtrusive place in the shadows at the side; there—considered “offstage”—she would await her formal participation in the action. A wishful smattering of clapping arose, only to be quickly hushed when its inappropriateness became clear. This was the anticlimactic start to an anticlimactic evening.

Ms. O’Connell, in an ensemble role less challenging, at least from an audience perspective, than what her role required in Dana H., is her usual outstanding self, sensitive, insightful, intelligent, and warm. However, her role of Justice, a small-town librarian, can’t be compared, let’s say, to Meryl Streep climbing one step higher on the acting-challenge mountain with each new character. A big award sets up the kind of big expectations to which, fairly or not, Justice doesn’t do justice.

Given Corsicana’s purpose, in fact, the bulk of our attention soon goes not to Ms. O’Connell but to the sweetly satisfying performance of Jamie Brewer, an actress with Down syndrome, who plays the similarly affected Ginny. She’s the currently depressed, 34-year-old half-sibling of 33-year-old, would-be filmmaker Christopher (Will Dagger). Following their mother’s death, Christopher has put his stumbling career on hold so he can care for his grieving sister’s needs while he teaches film at a community college in their Texas hometown of Corsicana.

As Arbery (Heroes of the Fourth Turning, a 2020 Pulitzer finalist)has explained in interviews and elsewhere, the play was inspired by his desire to write about his relationship with his own sister with Down syndrome. It’s only peripherally autobiographical, however, as he grew up in Dallas, had a much larger family (seven sisters!), and followed a different religion.
To flesh the play out, he’s added the characters of two invented people. One is Ms. O’Connell’s Justice, a close family friend, in her 60s. It’s she who introduces Christopher to the other character, a reclusive, barefoot, African-American musician/sculptor in his 60s named Lot (Harold Surratt) Why barefoot? Who knows?

Bringing in the new people allows Arbery to flesh out Ginny’s personality and problems, social and psychological, with an artificial situation (there’s very little plot). Hoping it will lift Ginny’s spirits, Christopher enlists the hesitant Lot to be a sort of companion to the music-loving Ginny, with the aim of writing a song with her. Lot’s songs, you see, are the narrative kind where you compose music to words you say more or less normally to express your thoughts. Ginny’s tastes, though, incline toward Hillary Duff, the Chicks, and Whitney Houston. Still, Ginny and Lot each have a need that the other fulfills.

There are a few bumps along the road, especially because of the initially uncomfortable match of the shy, uncertain, nervous Lot, and the unconventional Ginny, who has the potential to spark misunderstandings, which she does. (The forgettable song Ginny and Lot write was composed by Joanna Sternberg and Mr. Arbery.)

There’s a lot of talk about peripheral matters, but there’s little dramatic action over the course of two and a half slow-paced, pause-filled hours. The dialogue, however, is often interesting, if prolix and sometimes quirkily vague, and the acting is consistently fine, although Mr. Dagger’s nasality can be annoying. Mr. Surratt is particularly effective.

Ginny, like the actress who plays her, is high-functioning, which I hope is how you would describe it; she’s articulate, physically agile (she busts some moves), and often seems wiser than those around her. In fact, if it weren’t for certain physical characteristics, you might not even know she had Down syndrome. The condition itself is not addressed in any detail, so it’s not always clear—aside from issues even non-affected people might have, including the shakes—just what Ginny’s most disturbing symptoms are, or why she needs constant babysitting (a word she hates).

Mr. Arbery has said the play isn’t really “about” anything, but of course it is. Among other things, it’s about sibling love, family, community, grieving, friendship, caretaking, music-making, and romantic love (Justice trashes romance but she has a crush on Lot). That doesn’t, however, save Corsicana from dullness or absolve it from dramatic stasis.

Sam Gold (Macbeth, with Daniel Craig and Ruth Negga) is one of our few notable, if inconsistently noteworthy, conceptualist directors. I have loved some of his offbeat productions and loathed others. My reaction to Corsicana’s direction leans more in the direction of the latter than the former. Mr. Gold, for instance, seems to think the best way to capture Corsicana’s intimate world, much of which transpires in Ginny and Christopher’s ranch house, is to open the space up as widely as possible, placing it under a greenhouse roof.

Mr. Gold’s set designers, Laura Jellenik and Cate McCrea, have created a broad expanse within low, unadorned white walls; there’s barely any furniture aside from two leather couches, one upstage one down, moved around from scene to scene on a revolving stage. Hovering overhead is the peaked, translucent roof of what looks exactly like a greenhouse shed, its metal pillars at either side set into a track so, for reasons God only knows, the actors can move them up or downstage as the scene requires.

Gold resorts as well to the cliché of having the offstage actors visible at the sides, where, in this vast space, their lurking presences contribute to a sense of alienation and loneliness that seems antithetical to the heartfelt human connections Arbery wishes to convey. Isabella Byrd did the moody lighting, and Qween Jean handled the everyday costumes.

There’s a word that runs through Corsicana, and even in Mr. Arbery’s program note. It clearly affected Ms. O’Connell, who used it in her Tony acceptance speech. The word is “weird.” There’s nothing really weird about Corsicana. However, the way it’s been put on the Playwrights Horizons stage? Weird.