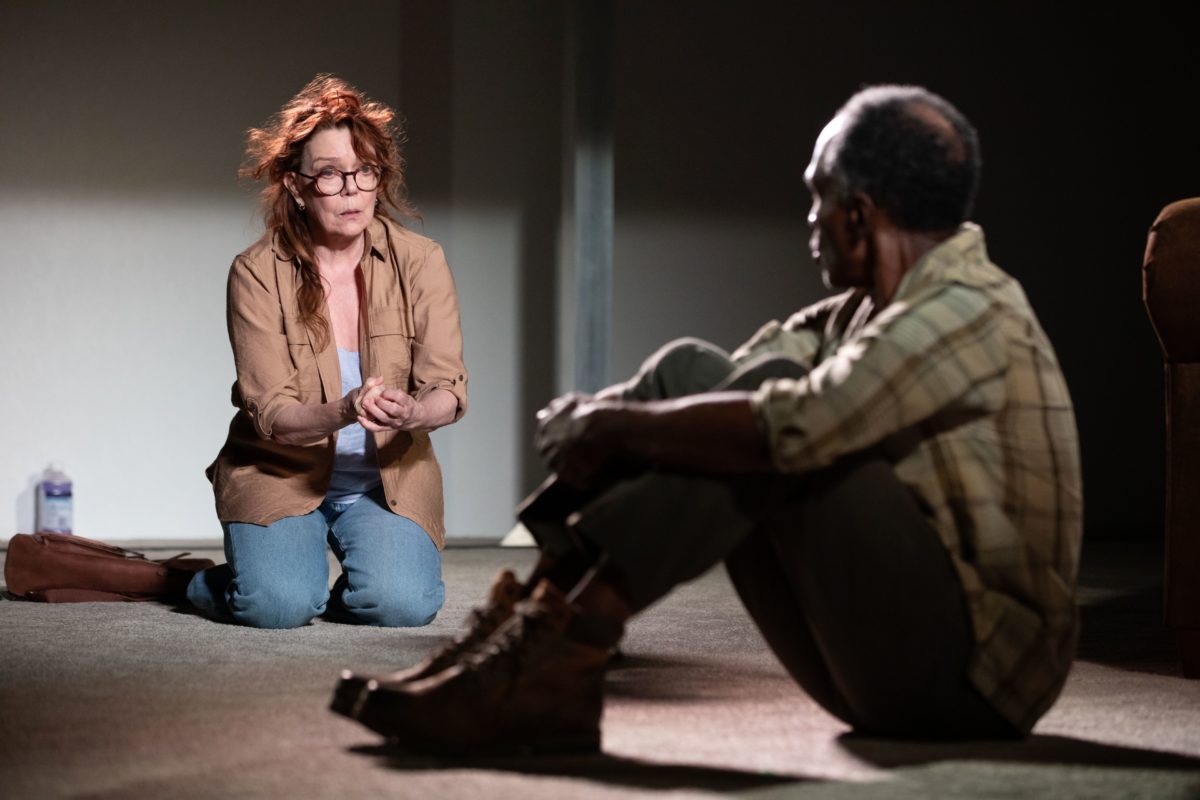 Both plays eschew conventional constraints of plot to focus on character development and connections. Nothing much “happens” in either piece. Their insightful playwrights deal with a group of friends and/or family reaching out to establish bonds after personal tragedy and public calamity strikes. Both authors eloquently articulate the language of loneliness and the striving to cure the condition.

Corsicana concerns four damaged people in the titular tiny Texas town. As he did with the characters in his award-winning play Heroes of the Fourth Turning, author Will Arbery creates a cast of lost souls stumbling towards fulfillment. Ginny and Christopher are 30-ish half-siblings, still adjusting to adulthood, and mourning the recent death of their mother. Ginny has Downs’ Syndrome, wants to find a boyfriend and have a family. Christopher now has to take on the caregiving duties for his sister their mom had always performed. He has his own issues like overcoming the trauma of childhood abuse and realizing his dream of becoming a filmmaker rather than teaching film studies. The pair’s older friend Justice offers support and suggests Ginny collaborate on a song with Lot, a brilliant artist-musician, who is on the autism spectrum and also trying to overcome past damage. Justice is another refugee from heartache and has a crush on the reclusive Lot.

The quartet’s interactions might work better in a novel since there is little “action” and lots of long monologues recalling past events. But the structure of these speeches is so graceful, Sam Gold’s staging is so natural, and the acting is so seemingly effortless, it feels like you are sitting in on a long-delayed visit with close, caring friends. Jamie Brewer, who has Down’s Syndrome in real life, is bubbly and touching as Ginny, capturing her desperate yearning for companionship and her own agency. Will Dagger makes Christopher a forlorn but adorable grown-up boy teetering on the edge of maturity. Deirdre O’Connell, fresh off her Tony win for Dana H., endows Justice with compassion and wisdom. Harold Surratt’s intense portrayal of Lot’s social anxiety is painfully real.

Laura Jellinek and Cate McCrea’s set resembles a huge storage space with a moving roof which stretches over the audience as the play progresses, suggesting the void within each character is trying to fill.

Brian Watkins’ Epiphany chronicles a similar search for connection and community, and also overlays political and social angst. After the death of her estranged sister, elderly hostess Morkan (a radiant Marylouise Burke) has invited several loosely acquainted guests to her enormous house (a beautiful Gothic design by John Lee Beatty) to celebrate Epiphany, even though she’s not sure exactly what the holiday is for. The guests barely know each other and all are somehow connected to Morkan’s nephew, a prominent social commentator and author. Unfortunately, the nephew who was supposed to deliver a speech does not show up due to depression. To add to the confusion, no one seems to have received the attached detailed instructions that Morkan e-mailed with the invitations. Mishaps and misunderstandings come and go. A guess is accidentally stabbed, another is revealed to be a problem drinker, a psychological game is played—but not like the vicious ones in Who’s Afraid of Virginia Woolf. This one is mild and only somewhat thought-provoking. Oh, and the lights flicker on and off periodically (Isabella Byrd created the cosy, warm lighting), paralleling the uncertainty and anxiety felt.

As Morkan (she goes by her surname) and her friends stumble through the evening, they discuss—at length—their alienation in a social-media-crazed world where actual human contact is discouraged and feared. (All refuse to dance together over COVID concerns.) In a telling move, the hostess requires everyone to put their phones in a locked box and the reactions are hilariously indicative of our screen-addicted culture. As with Corsicana, there is no “plot” per se, but through Tyne Rafaeli’s smooth direction and Watkins’ moving and naturalistic dialogue, skillfully delivered by the large company, we get to know these people and the author’s idea of how we live now.

At times, the comedy based on social awkwardness is pushed too hard, particularly by an overplaying Heather Burns as Kelly, a desperate-to-please musician who gets progressively drunker and aggressive. Ironically, Kelly is not the problem drinker the party has been warned about. Burns does convincingly convey Kelly’s insecurities, matched by Francois Battiste’s protective coolness as her partner. The captivating and realistic moments of the rest of the play outweigh any excesses. Colby Minifie passionately delivers a denouncement against being labelled, categorized and branded by corporate interests. Jonathan Hadary has a soulfully sweet childhood recollection. Carmen Zilles exudes empathy as the missing guest’s romantic partner, extending understanding and beautifully singing a folk song. Omar Metwally and David Ryan Smith bicker playfully as a feuding gay couple and CJ Wilson admirably limns the potential alcoholic’s attempts to remain sober and socially acceptable.

Marylouise Burke is a brilliant Morkan, comically eager to engage her guests, deeply yearning to create a community and intensely regretful she has lost her sister. The characters never do settle on the purpose or meaning of Epiphany and the play ever really brings up the title emotion or a moment of “Ah ha! That’s what the author meant!” But both Epiphany and Corsicana do provide an entertaining and evocative examination of our company-craving society.