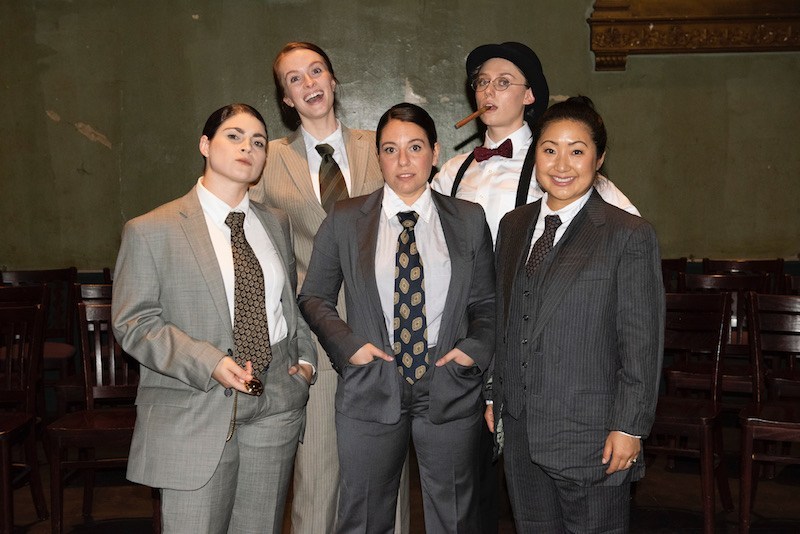 Think Bernie Sanders, and the 2016 democratic convention, and you can begin to imagine the tumult on stage. Soon, several vice-presidential candidates throw their hats into the ring. Insults, jibes, innuendoes walk the tight rope here. That, and a hot dog vendor keep the action going.

Staged as a real time event, in which the actors portraying the vying politicians merge into, and out of the audience, Convention is not linear in structure. Why these candidates emerge when they do, or what really went down to cause Truman’s election is not to be clarified.  As written by Danny Rocco that is the fabric of history – more like a Sargasso Sea than an Excel spreadsheet. Stuff happens. It’s a dirty war. Still, watching it is fun!

Set in a beautiful hall, housed in the Lafayette Church in Fort Greene, the

surroundings bring us back to 1944, with walls of chipping paint, and old wooden seats. Ragtime piano music also marks the affinity with African American culture, and reflects the progressive temperament Wallace’s team flaunted.

Democratic rusticity abounds. (This is nothing like the glitter the Republican Party puts on.) And Jennifer Raskopf’s period costumes are a hoot. Truman’s wife wears a dowdy skirt suit, and a little hat, but as played by Daniel John Serpati, a tall ivy league looking man, it looks ludicrous.  Similarly, women in pants suits portraying men as well as women, mingle among us.

Inclusiveness has a strong presence here. Charles Everett, the African American actor plays Truman, and Claire Mikelle Anderson, in the role of Wallace, is convincing, while not necessarily manlier in her role.

Directed by Shannon Fillion, the hall turns into something of an echo chamber, in which each audience member hears different voices. The banter going on next to my seat, can’t be noticed at the other end of the auditorium. And what they saw and heard is not what I can observe. It’s cacophonous that way.

Still, the conversation sounds like contemporary partisan bickering. One representative shouts, “We’re all Democrats, we’re all on the same team.” To which another responds, “But we’re not. That’s the problem.” Better yet, “You’re like birds tweeting. Use your minds!”

Clearly, the issues that are being voiced are those of our own time. Here the conflict between the progressives, represented by Wallace, and the more moderate position championed by Truman, has a lot to do with what the party can serve that voters will buy.

Cheering at the end of Act I, “It’s 1944. What are you waiting for?” is the show’s battle call, an impetus to people who wonder why we VOTE.