March 12, 2022: On March 13, 2020, precisely two years ago, minus one day, I was scheduled to see Coal Country at the Public Theater; you all know what happened next. The show, worth the wait, is now back, although it’s moved from the East Village to the Cherry Lane Theatre in the West. There, Audible Theater, which creates audio recordings of the works it produces, is behind the Public’s production, with all but one of the original ensemble—Kim Gomes replacing Melinda Tanner in the small role of a judge—intact. 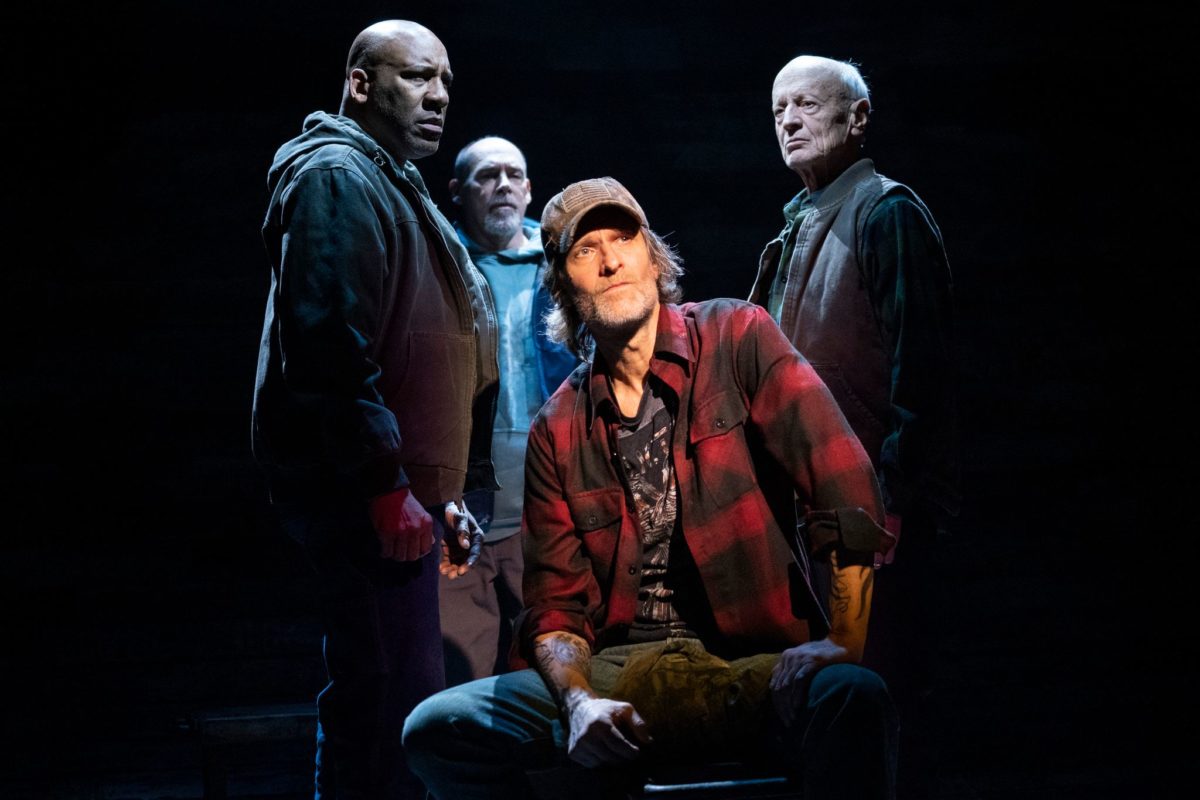 March 12, 2022: On March 13, 2020, precisely two years ago, minus one day, I was scheduled to see Coal Country at the Public Theater; you all know what happened next. The show, worth the wait, is now back, although it’s moved from the East Village to the Cherry Lane Theatre in the West. There, Audible Theater, which creates audio recordings of the works it produces, is behind the Public’s production, with all but one of the original ensemble—Kim Gomes replacing Melinda Tanner in the small role of a judge—intact.

Given the state of the world today, with the knockout combination of Covid and the Russian invasion of Ukraine, inflation, gas prices, and everything else, you’ll have to dip deeply into whatever reserves of compassion you still possess if you’re going to connect emotionally with this blend of docudrama and country music. It is, after all, a dramatized report on the circumstances surrounding a 2010 West Virginia coal mine explosion that killed 29 miners. As the action unfolded, I, for one, while appreciating the show for its stylistic excellence and superlative performances, couldn’t stop thinking about the enormously tragic catastrophe going on everyday in Ukraine, which has been sucking up my emotional reserves on a daily basis.

I found it impossible to watch the trauma of loved ones left behind after family members have been blown to shreds, responsibility for which is placed at the feet of Don Blankenship, CEO of Massey, the mostly nonunion company that bought the UBB (Upper Big Bridge) mine, without constantly thinking of what people are experiencing because of Vladimir Putin. When Judy (Deirdre Madigan), a doctor, and the only character neither a miner nor one’s wife, describes the gruesome remains of her beloved brother, your thoughts may instantly switch to the image of parents and siblings undergoing the same thing overseas, or wherever similar atrocities are being carried out on our riven planet.

But this should be a review, not a lament about our depressing times. In that regard, Coal Country, by the team of Jessica Blank and Erik Jensen (Exonerated),takes place on Richard Hoover’s minimalist set of a rear wall of deteriorating wooden planks, lit with truly sculptural beauty by David Lander, and costumed by Jessica Jahn with pinpoint authenticity. Based largely on interviews Blank and Jensen held with close relatives of those who died, it’s an intermission-less, ninety-minute work framed within the context of a trial in which Blankenship is being tried for several crimes. Chief of them is conspiracy to overlook mining regulations designed to protect the safety of his workers.

This allows a select group of relatives to deliver what are, by and large, monologues regarding memories of the people they lost, the internal details of coal mining, the circumstances leading up to the explosion, the explosion itself, its horrific aftermath, and the determined fight the miners’ families put up to punish the negligent bosses. The conclusion—widely reported in the media—tells us that Blankenship was found guilty of only one crime, for which he served a year in prison and paid a $250,000 fine. Given the dimensions of what he was accused of and the amount of money he was earning, this was little more than a slap on the wrist.

Only rarely, as in the scenes between a middle-aged married couple, Goose (Carl Palmer), who recognized well in advance that the mine was a ticking time bomb, and Mindi (Amelia Campbell), do we have actual dialogue. Judy, as we’ve seen, loses her younger brother; Gary (Thomas Kopache), an elderly former miner, loses his son; Roosevelt (Ezra Knight), an African-American miner, loses his father; Tommy (Michael Laurence), another miner, also loses a son; and Patti (Mary Bacon) mourns the death of the man she belatedly fell for and lost after only four and a half years of happiness.

Highlighting the Appalachian coal country atmosphere is Steve Earle, a balding, bespectacled, gray-bearded, guitar-playing country singer who, sitting on a stool to one side or moving to the stage proper, sings his own tuneful and meaningful songs (with the classic “John Henry” thrown in for good measure). Sometimes he sings with the company, and sometimes with someone else. Patti gets a memorable near-solo toward the end. At one point, the audience is urged to join in on a number about “Union, God, and Country.” Unions, and their value, form a principal theme.

The music often threads its way beneath the speeches or accompanies physical activity, exquisitely directed by co-author Blank, with memorable choreographic sequences—one with benches being especially striking—created by Adesola Osakalumi.

Coal Country’s excellent ensemble hits the motherlode over and over, mining it for its every ounce of unbearable grief, labor unity, and moral outrage. How deeply you’re affected by it, though, now that—as Tom says in The Glass Menagerie—the world is again “lit by lightning,” and your worries are pulled hither and yon, is something you’ll have to determine for yourself.