The New York area is finally getting Toruk – The First Flight, the show that’s been captivating audiences worldwide. Inspired by James Cameron’s film Avatar, it’s quite unlike nothing CduS has executed before. In fact, in numerous ways Toruk is uniquely different from what Cirque audiences expect.

Mark your calendars! 2016 is the year of Cirque du Soleil in New York.  In addition to Toruk’s visit, there’s Paramour, playing on Broadway at the Lyric Theatre; and arriving on September 29 [through November 27] is CduS’s highly-acclaimed new show Kurios – Cabinet of Curiosities in Cirque’s classic blue and yellow tenton Randall’s Island.

“My dream has been to attract the best talent the world has to offer,” says Cirquefounder Guy Laliberté, “and that dream’s still alive. We’re home to creative people from all over the world. Each is essential to what we do and deserve all the credit.” 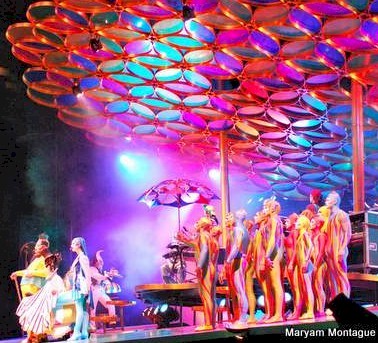 Toruk- The First Flight is a prequel, taking place some 3,000 years before the film’s timeline. Those eagerly awaiting the release of Avatar 2 will have to wait until 2018.

The story, inspired by Cameron’s blockbuster hit and written by co-directors Michel Lemieux and Victor Pilon, and playwright Olivier Kemeid, is nowhere as essential as the spectacular staging. With a volcanic eruption of enormous proportions on Pandora, it’s all but certain “that the sacred Na’vi Tree of Souls is to be destroyed.

Toruk is the show’s central character and critical to the Na’vi clans’ sense of destiny and interconnectedness with members past and present. The Na’vi name “refers to the great leonopteryx that rules over the Pandora.” 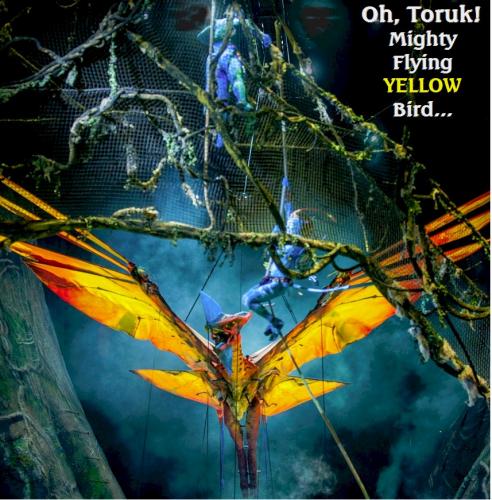 This creature along with surreal Pandoran animals are brought to life by Patrick Martel’s large-scale puppetry. Toruk is a reverse string puppet (handled from the base), while animals Austrapede, Turtapede, and Direhorse are lived-in, with one or two handlers inside. Viperwolf is an ‘in-view puppet’ (the lower half of the puppeteer is outside, becoming a part of the puppet, while his/her upper is inside.

The adventure on the moon Pandora begins with best bud Omaticaya Clan teens Ralu (Gabriel Christo), son of a hunter who taught him exceptional focus and discipline, and the spunky, intense orphaned Entu (Guillaume Paquin), who’s fully in touch with his emotions and  trust his instincts, seek out Toruk, the giant sky predator in order to save Pandora. On their mission, they encounter Tawkami Clan member Tsyal (Giulia Piolanti) the only child of the village chief who lost her mother when she was a child.

What fun would you have if you knew what transpires?  Fair warning, sometime the goings on can be a bit convoluted, but then who goes to CduS for the story?

Keep in mind you’re on Pandora where, as in the film, they speak [invented] Na’vi. No worries, The Storyteller, the last living member of the Anurai clan and friend to the Sky People [humans], portrayed by Sébastien Dodge, is narrator, delivering action recaps.

Pandora is recreated in astonishing multimedia spectacle using 40 projectors throwing mind-boggling visuals onto the 20,000-square-foot stage. Breathtaking moments are created, with one that redefines the definition of knockout: when thunderous waves wash over the audience and crash on to the set. The show is made up of “one stunning visual tableau after another … producing a new and exciting set piece each time.”

Laliberté is artistic guide, with Neilson Vignola as “creation director.” The awesome far-away icy moon rock island setting [made with inflated rubber and steel], is created by Carl Fillion. The designer of the daring acrobatic performances is Germain Guillemot. They, along with costume and make-up designer Kym Barrett (films Matrix, Romeo + Juliet) are the real stars of Toruk.

“The costumes must tell a part of the story,” says Barrett, “and must look Na’vi made. The Na’vi, are divided into five clans – Kekunan, Omaticaya, Anurai, Timpani, Tawkami – each with its own colors and attributes. Some wear elaborate headdresses while others are adorned with organic accessories. Each character has its own look, personality, and style.”

In the arena production, characters and action need to be clearly visible from all angles. “However,” explains Barrett, “the technical intricacies of the costumes should remain invisible to the audience. Costumes need to show just enough details to look handmade when seen close-up, and still have that organic, shimmery, intriguing feel from afar.

To create Pandoran fibers, she and her large team of associates used “certain materials that imitate objects found in nature. Crinoline is used to give the illusion of a loin cloth made of leaves.” 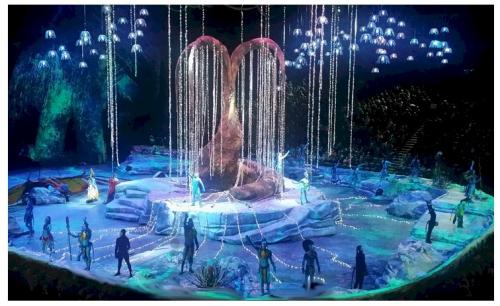 The Toruk – The First Flight score, available on CD, is driven by an energetic beat-out-out-that-rhythm-on-the-drums percussion by Boe & Bill (Guy Dubuc and Marc Lessard), who did the score for Paramour. Choreography is by Tuan Le and Tan Loc Nguyen. 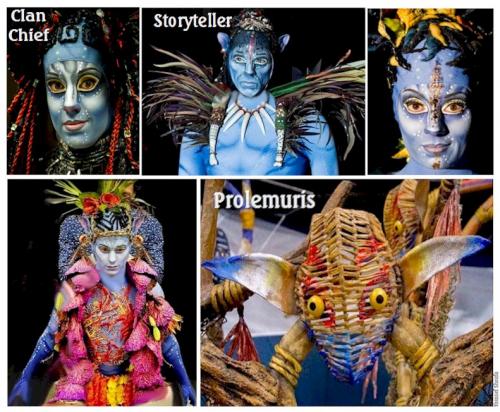 Tickets for Cirque du Soleil’s Toruk – The First Flight are $30 – $135, and available at the Barclays Center and Prudential Center box offices and through Ticketmaster.com or by calling (800) 653-8000.

Presented by VISA Signature and United Airlines Mileage Plus Card. Visit www.cirquedusoleil.com/new-york for an array of behind-the-scene features and an interactive visit to Pandora.