November 18, 2022: The extraordinarily entertaining Circus Vazquez, one of the U.S.’s premier and longest-running family-owned shows, is no stranger to the New York area where it’s played for 20 seasons. The 2022 Edition plays through December 11 in Queens across from Citi Field (123-01 Roosevelt Avenue) with a high-energy family show under a brand new Big Top. It’s, as usual, a don’t miss/must see show. 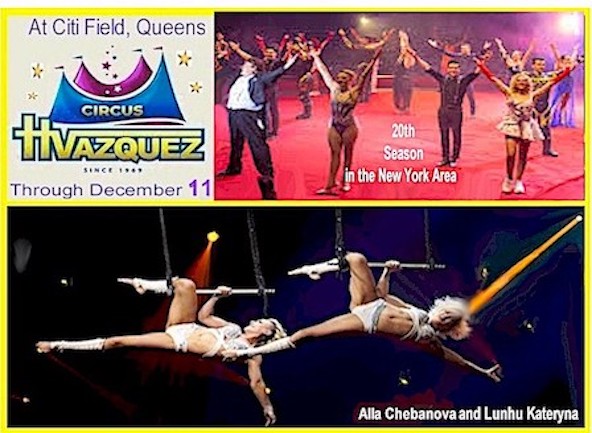 November 18, 2022: The extraordinarily entertaining Circus Vazquez, one of the U.S.’s premier and longest-running family-owned shows, is no stranger to the New York area where it’s played for 20 seasons. The 2022 Edition plays through December 11 in Queens across from Citi Field (123-01 Roosevelt Avenue) with a high-energy family show under a brand new Big Top. It’s, as usual, a don’t miss/must see show.

The heated tent could fit another popular area circus in it. There’s a huge entrance lobby with typical concessions and photo opts with the friendly cast. And, under the Big Top are more ringside seats than ever, and no obstructed views. If you’re having a family outing, before the show, during intermission, and after the show, Circus Vazquez’s daredevil stars, famous clown, and a couple of very friendly bears welcome you for portraits – for a fee, of course.

Circuses like to boast of presenting “one-of-a-kind” acts and “all-new” shows; however, when two of the circus world’s most popular acts are seen over and over and over again, that’s a hard job. Yet, ringmaster and co-owner Memo Vasquez [one of five brothers] came up with new variations to make the tried-and-true even  more exciting, more edge-of-the-seat.

Cases in point: the Act One finale — Columbia’s six X-Metal Riders inside the huge Globe of Death revving their motorcycle engines plowing the globe in all sorts of configurations with split-second precision timing. It’s mindboggling and mind-blowing! One tiny burp, and it’s chaos. The reveal at the end is quite a surprise: The sixth rider is none other than the stunning Karen Rodriguez.

In between there’re plenty of laughs with seventh-generation superstar Italian clown, David Larible, former Ringling Bros. headliner as well as international TV, stage, and film artist. He’s the recipient of the Gran Prix for Lifetime Achievement from the International Clown Festival and the Gold Clown at Monte Carlo’s International Circus Festival. Besides his hilarious interaction with audience members in some of his classic routines, a highlight is his singing “My Way” in multiple languages. And, yes, he does comedy his way!

Sandwiched between these three standouts are Carolina Vazquez [Yes, one of the Vasquezes] ascending on trapeze into the crown of the tent to mesmerize audiences with her agility. What she does next with a folding chair is not for the faint-hearted – especially since all is done without a net.

Ringmaster  Memo Vasquez (one of five brothers) then introduces an act (I’d) never seen before: Alla Chebanova and Lunhu Kateryna channeling as twins on double trapezes flying over audience heads, sway side-to-side, spinning faster than figure skaters, and exchanging places on the trapezes.

Also appearing, by virtue of a stroke of good fortune, is the huge Bingo Troupe from the Ukraine, who with a stroke of good fortune escaped to Poland as the conflict there segued into all-out war. Headliner Valeria Koshova takes to the in an elegant routine with the aerial straps as other members perform on unicycle and do contortion.

Italy’s brother and sister act, Asia and Dylan, Medini Xtreme Skaters, perform hair-raising synchronized roller skating maneuvers dizzily spinning on the equivalent of an Eisenhower dollar. The carpet rolls out to welcome the four Super Tumblers from the U.S. and the Republic of Guinea doing double somersaults, hand balancing, and flinging each other through the air with the greatest of ease.

High above the ring, laying down the beat behind each act, are the young, talented musicians of the Circus Vazquez Band.

Tickets, available at www.CircusVazquez.com  or onsite at the Circus Vasquez  box office, are at $48 – $ 70, inclusive of all fees. In addition, there are children, senior, military, and handicap pricing. Order online and save $10 on adult tickets.  The website has directions and a map. Reach Circus Vazquez via the IRT 7 train to the Mets-Willets Point station. Take the exit to the right and walk straight ahead one block. Parking onsite is available for an outrageous $30 [mandated by the City of New York].