November 1, 2022: If you’re a playwright with an idea for a play in which you want to use only two characters but also need to provide a huge amount of exposition, you might want to follow the method used by Joseph Dougherty’s Chester Bailey, now at the Irish Rep in a production costarring one of New York’s foremost actors, Reed Birney, and his up-and-coming son, Ephraim Birney. Although not a father-son play, it does feature an older man who could be a father figure, and a young man who has a few father (and mother) issues, albeit not the play’s most pressing ones. 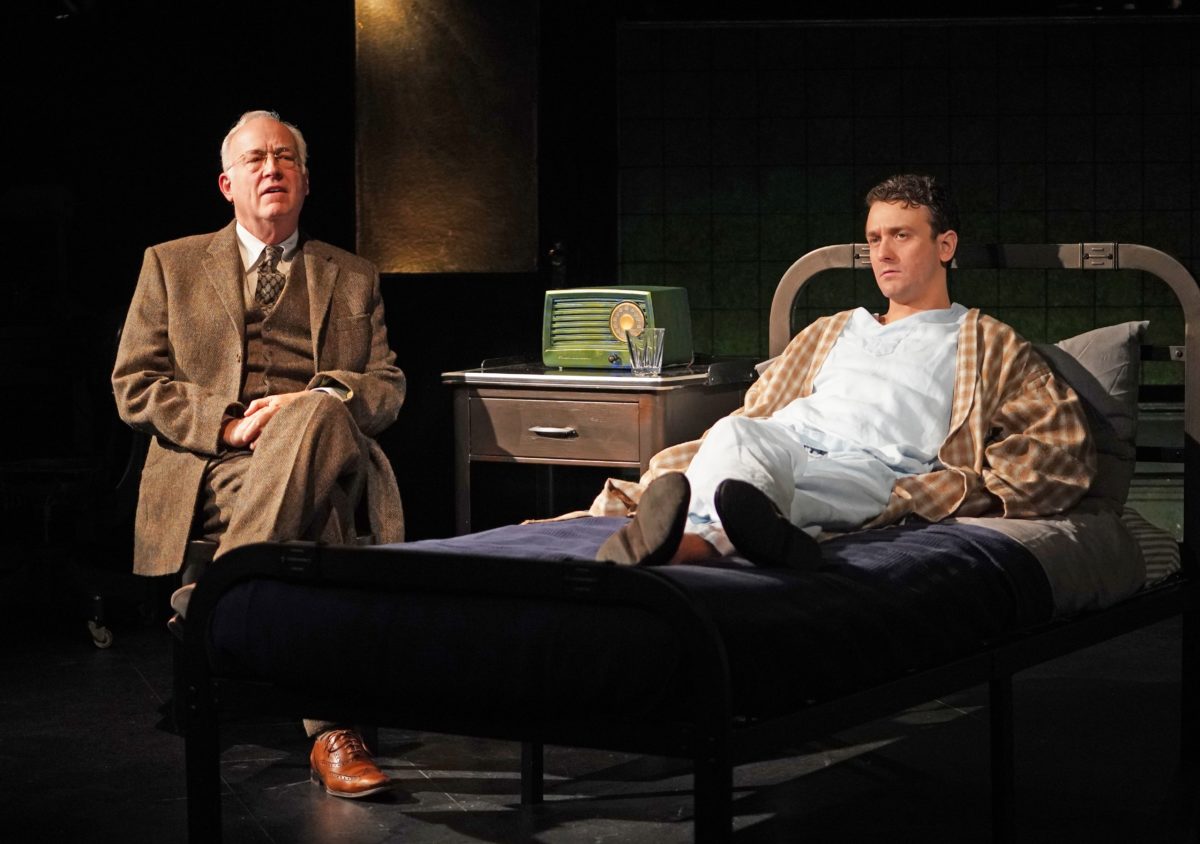 November 1, 2022: If you’re a playwright with an idea for a play in which you want to use only two characters but also need to provide a huge amount of exposition, you might want to follow the method used by Joseph Dougherty’s Chester Bailey, now at the Irish Rep in a production costarring one of New York’s foremost actors, Reed Birney, and his up-and-coming son, Ephraim Birney. Although not a father-son play, it does feature an older man who could be a father figure, and a young man who has a few father (and mother) issues, albeit not the play’s most pressing ones.

To tell his story, Mr. Dougherty has each character fill in their backgrounds in considerable detail via direct address, a technique common to solo plays, even those where the actor impersonates more than one character. Such a monologue-based approach creates problems when there are two persons involved, evoking a storytelling, narrative atmosphere of tell rather than show that can distance you from the immediacy of the drama. Mr. Dougherty does eventually rub his characters together to ignite dramatic sparks but by then a crucial audience-performance connection has been weakened, although by no means fatally.

Chester Bailey, which premiered at San Francisco’s ACT in 2016, and had subsequent showings at the Contemporary American Theater Festival in 2019 and the Barrington Stage in 2021, focuses on Dr. Philip Cotton (the elder Mr. Birney), a middle-aged psychologist, and his 23-year-old patient, Chester Bailey (the younger Mr. Birney). The bulk of the action, smoothly staged by Ron Lagomarsino, is set at the fictional Walt Whitman Hospital in Long Island. The time is 1945, Jo Stafford’s “Haunted Heart” underscores the period feeling, and World War II has just ended.

Chester, a hearty Brooklyn boy, is a wartime casualty, but not, as you might imagine, because he was wounded in battle, either physically or mentally. A riveter at the Navy Yard, who, because of parental pressure, managed to avoid going off to war (shouldn’t he have been drafted?), got his “reserved occupation” job as an alternative to active duty. There, where he felt guilt about his evasion, he was the victim of an accident that lost him his eyes and both his hands. He, however, believes he can still see, somewhat, and that he still has his hands, so it is Dr. Cotton’s job to somehow get him to abandon his delusion, or to simply let him live with them.

Dr. Cotton—silver-haired and wearing wire-rimmed glasses and a tweedy three-piece suit that make him look professorially mousy (costumes by Toni Leslie-James)—has his own delusions, of course. He’s just been divorced, is on the outs with his daughter, and is having an affair with his supervisor’s glamorous wife that can go nowhere.

Clad in pajamas and robe, Chester, despite his traumatic experience, is able to cope with it by convincing himself it’s not real, allowing him to take an upbeat attitude. This is enhanced by yet another delusion, his conviction that he has a possible future with a pretty girl he saw working at a Penn Station newsstand.

Should his fantasies, in the interests of the shrink’s standard of mental health, be crushed? It’s a dilemma reminiscent of that between the psychologist and the boy in Peter Shaffer’s Equus. It leads to several intense moments, including a physical tussle between shrinker and shrinkee, and a big reveal concerning sexual malfeasance in the hospital.

Reed Birney, as always, gives a compellingly honest portrayal. Ephraim Birney shows great promise but I was never convinced of his authenticity as a working-class Brooklyn youth. His accent is technically acceptable but still sounds more like acting than reality, at least to the ears of someone to the accent born and bred. For all his overt emotionality, he also sometimes seems too artificially overwrought. In time, hopefully, he’ll absorb the effortless naturalness of his gifted father, and not have to push quite so hard.

Once again, a brilliant designer, in this case the great John Lee Beatty, has found a way to squeeze scenic genius onto the small, physically awkward Irish Rep stage—a huge pillar dominates the down left corner—this time with a generalized set of curving, overhead, parallel girders evoking both the old Penn Station and the hull of a ship at the Brooklyn Navy Yard, while also serving as Chester’s hospital room; properly lit, it also serves for a memory of Coney Island’s Luna Park. Enhanced by rows of hanging lamps, the mirrored rear wall, under Brian MacDevitt’s sensitive lighting, creates an illusion of fathomless depth.

Chester Bailey has been seen as a cautionary tale about the impossibility of curing the delusions of people who believe that what they see with their own eyes is not true, but fake, while what they read online or hear from their acquaintances, no matter how distorted, is the truth. For people like that, who think they can see even when they have no eyes, what they convince themselves they can see is truer than true. Which would mean at least half of our country is made up of Chester Baileys, all of them incurable. Whether such was Mr. Dougherty’s intention or not, it reflects as tragic a condition of our times as any.