Mary 22, 2022: If you’re a fan of classic Russian literature, there’s a treat waiting for you at The Sheen Center, where Blueprint Productions in presenting in repertory the work of two iconic writers, Anton Chekhov and Ivan Turgenev. Both plays are adapted and directed by Will Pomerantz and feature an original jazz score by Nancy Harrow, performed nightly by a live jazz quartet. 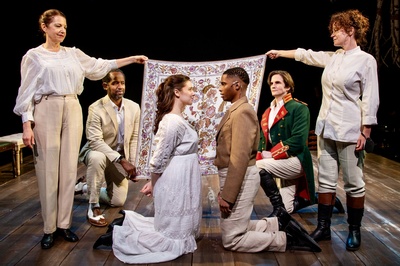 The Cast “About Love”

Mary 22, 2022: If you’re a fan of classic Russian literature, there’s a treat waiting for you at The Sheen Center, where Blueprint Productions in presenting in repertory the work of two iconic writers, Anton Chekhov and Ivan Turgenev. Both plays are adapted and directed by Will Pomerantz and feature an original jazz score by Nancy Harrow, performed nightly by a live jazz quartet.

Although Turgenev was a generation older than Chekhov and not as well known outside Russia, the two writers have much in common. Both wrote about the complexity of human nature, personal regret and unfulfilled dreams. More specifically, the individuals they write about are always falling in love with the wrong people.

Turgenev’s “About Love” is an 1860 short story about a young man, Peter, who falls in love with a mysterious older woman, Zena, while on vacation with his family. This unfulfilled love awakens all his youthful passions, and in the end, teaches him some bitter life lessons. For the most part, Pomerantz’s About Love uses narration to tell the story, with members of the ensemble cast playing several parts, except for Sylvia Bond, who plays Zena, and Manny Dunn, who is Peter.

The dialogue is very well integrated into the narrative and so well written that, with the help of the talented cast, we are always certain which character is speaking, whether it be Peter’s mother (Jean Tofler) or father (Tom Patterson), Zena’s various suitors (Nathan Hinton) or Zena’s mother, the Princess (Pilar Witherspoon). However, there are times when the experience seems more like listening to a very expressive narrator than watching a play. Nevertheless, the language and the music of About Love are so engaging many people will be fully onboard.

Chekhov’s Three Sisters is the story of Olga, Masha and Irena, who all believe they are unhappy because their now deceased parents moved the family from Moscow to a small, provincial town eleven years ago, and they have never managed to get back. But it soon becomes apparent the three sisters would most probably not be happy wherever they lived.

Olga (Elizabeth Ramos), the eldest, is a disillusioned schoolteacher, a spinster who has long been in love with Kulygin (Tommy Schrider), the husband of her younger sister, Masha (the very effective Amanda Kristin Nichols). Of course, Masha finds the amiable but foolish Kulygin boring and ridiculous. The man who fascinates her is Lieutenant-Colonel Vershinin (Nehal Joshi), who is married to a woman in the habit of attempting suicide. The youngest, Irena (Essence Brown), is not yet old enough to have given up hope of finding true love in Moscow, but as the play progresses, she realizes she will most probably have to settle for considerably less.

The three sisters have one brother, Andrei (Miles G. Jackson), secretary to the county council, who marries Natasha (the deliciously nasty Silvia Bond), a sweet and timid country girl who turns into a bossy ill-tempered and unfaithful shrew. Andrei too dreams of returning to Moscow. He too would probably be no happier in the big city.

Pomerantz has fulfilled all the comic potential of Three Sisters (and Chekhov did believe he was writing comedies). The scene in which Staff Captain Solyony (Harrison Bryan) and Baron Tuzenbach (Tom Patterson) engage in a drinking contest, and the one where Kulygin hides under a bed to avoid the old drunken doctor, Chebutykin (John Ahlin) are particularly funny.

Pomerantz also delves into all the despair and disappointment Chekhov’s characters perpetually experience. As the Russian playwright would most likely appreciate, by the end of Three Sisters, we are laughing though our tears, or perhaps crying through our laughter.Chekhov + Turgenev runs through June 5 at The Sheen Center, 18 Bleecker Street.
Photography: Russ Rowland