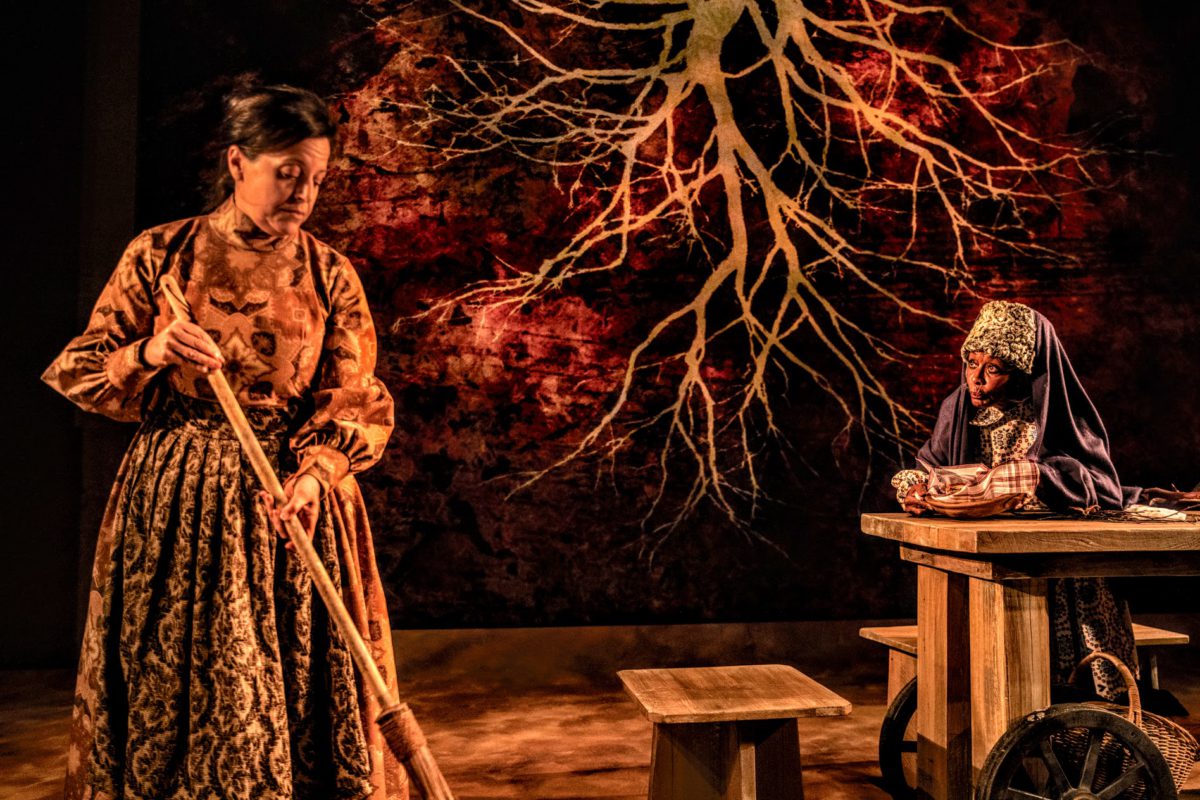 That title covers British actor/playwright Miles Malleson’s (1888-1968) barely-known adaptations of two short stories by great Russian authors, both known for fiction as well as drama: Anton Chekhov’s “The Artist” and Leo Tolstoy’s “Michael.” Perhaps some other production might discover their theatrical mettle, but, as represented here, neither work does anything to burnish their distinguished writers’ reputations.

As directed by Mint artistic director Jonathan Bank and Jane Shaw, each doing one play, Chekhov/Tolstoy demonstrates why—without the artistic tools to resurrect them—the R.I.P. marking the graves of dead plays must sometimes be respected.

Chekhov’s “The Artist,” soporifically directed by Banks, is based on an 1896 story translated either as “The Artist’s Story” or “The House with the Mezzanine.” The original’s first-person narrative, told by the titular figure, Nicov (Alexander Sokovikov), takes place in the garden of a country house owned by a wealthy widow, named only as Mother (Katie Firth). She lives there with her two beautiful daughters, Lidia (Brittany Anikka Liu), 23, and Genya (Anna Lentz), 17.

Nicov, a romantic-looking fellow “between thirty and forty,” chats in poetically imbued sentences with the admiring, teenage girl, a sensitive bookworm, as he paints a landscape. The pair are soon joined by Lidia; the mildly comical, aloof landowner Bylekurov (J. Paul Nicholas), with whom Nicov is staying; and Mother. Ultimately, the conversation turns to the purpose of life, represented chiefly by the points of view of Lidia and Nicov. She, a teacher, devotes herself to helping the town’s poor peasants with their educational and medical needs, while questioning the practical value of his art.

He, on the other hand, is a cynic who, when his idle lifestyle induces him to get around to it, prefers painting to helping the poor. Sounding pretty much like the kind of soulful windbag populating several of Chekhov’s famous plays, he blames the peasant’s degradation on the kind of help Lidia provides. They should, instead, be freed from their labors so they can have time to experience life’s spiritual benefits. Meanwhile, left alone, and regardless of their age difference, he and Genya fall in love. Her mother, hearing of it, whisks her away before the relationship gets any further.

Roger Hanna’s setting for “The Artist” ignores the script’s detailed realism, in which the house is seen, for a simple arrangement, placed within a receding series of false prosceniums. Several seats are situated before a backdrop painting of a large tree with flaming red leaves. Those leaves are the only thing awake in this slumbering production, laboring under all the old clichés of pause-filled, heavy Russian gloom. The actors, often borderline inaudible, drift sleepily along at the lowest of energy levels, even during the most heightened moments. Chekhov’s story is a dully monotonous talkfest for which they are clearly unequipped.

We might ask, by the way, why Lidia is wearing a wristwatch at a time when these were still rarities; wouldn’t a pocket watch be more in period? And why, since he’s painting, isn’t Nicov wearing a smock? Instead, costumer Oana Botez has given him a nicely tailored vest over a white shirt, and pants tucked into boots. He keeps wiping his hands with a rag, but shouldn’t he have some spots of paint on his garments? And shouldn’t he have a palette?

The most notable feature of the equally weary, stale, flat, and artistically unprofitable “Michael,” distinguished sound designer Jane Shaw’s directorial debut, is the presence of 91-year-old Vinie Burrows as the elderly Aniuska. Her spark is one of the rare bright spots in this tale, based on Tolstoy’s “What Men Live By,” an 1885 religiously oriented parable. It’s a bit livelier than “The Artist” but it nonetheless fails to cast off the pall of amateurishness afflicting the Chekhov adaptation.

As Chekhov’s tale is about to be replaced by Tolstoy’s, the background rises to reveal the soil beneath the red tree until the scene is dominated by the tree’s sprawling white roots. I have no idea of what the connection is between these roots and Tolstoy’s tale of a poor shoemaker named Simon (J. Paul Nicholas).

Returning from his unsuccessful attempt to collect all the money owed by his customers so he can make a new coat, Simon finds a bedraggled, naked man named Michael (Malik Reed), unable to speak. He takes pity on him and brings him home, where his wife, Matronya (Katie Firth), already fearful about the lack of food, is none too pleased about the visitor’s presence. When she eventually extends her natural generosity toward him, it earns Michael’s smile.

Time passes, and Michael becomes Simon’s dependable assistant. Then, one day, Michael displays preternatural powers when, instead of making the boots ordered by a demanding nobleman (Alexander Sokovikov), he rips up the leather. Simon, angry, declares that all the leather is good for is soft slippers. However, when the nobleman unexpectedly dies, slippers turn out to be the perfect thing for the dead man’s feet. Michael smiles again.

He smiles for the third time years later after hearing a woman customer’s story about how she took in two girls, one lame, following the death of their mother, whose body crushed the girl’s foot when she fell off her deathbed.

This encounter brings a lesson leading to Michael’s revelation that he must leave because, as he reveals now that he can speak again, he’s an angel. He incurred God’s anger but has been forgiven because he’s learned the answers to these God-given puzzles: What Dwells in Man?, What Is Not Given to Man?, and What [Do] Men Live By?

He explains how each of his smiles was inspired by something he experienced that answered one of the questions. Each taught him the meaning of love and its relation to God, allowing him to regain his angel wings and return to heaven.

Much as it might seem this rather preachy material could work if realized in theatrically satisfying terms, the performance is leaden, woodenly acted, and lacking the kind of imaginative, perhaps primitive, theatricality it seems to call for. Something about the story suggests it might actually work better as a puppet play, with the special effects that would allow. At any rate, these human actors are not its best interpreters.

Next up for the Mint is Chains, a 1909 English play by Elizabeth Baker. Successfully revived in 2007 by a London theatre, it looks, on paper at least, like a more comfortable fit for this important New York troupe than this clunky combo of Chekhov and Tolstoy.