September 12, 2022: Preternaturally mature 15 year-old Charles Kirsch apparently got the Broadway bug at seven when he saw the revival of On the Town. August 2022, with pandemic time on his hands, the teenager inaugurated weekly theater podcast Backstage Babble. Knowledge, insight, grace, and appreciation mark signature interviews. One hundred twenty episodes and two years later a beautifully produced anniversary celebration arrived at 54Below with bells on. Kirsch is as well spoken and gracious on stage as he is without an audience.  54/Below was packed and buzzing. 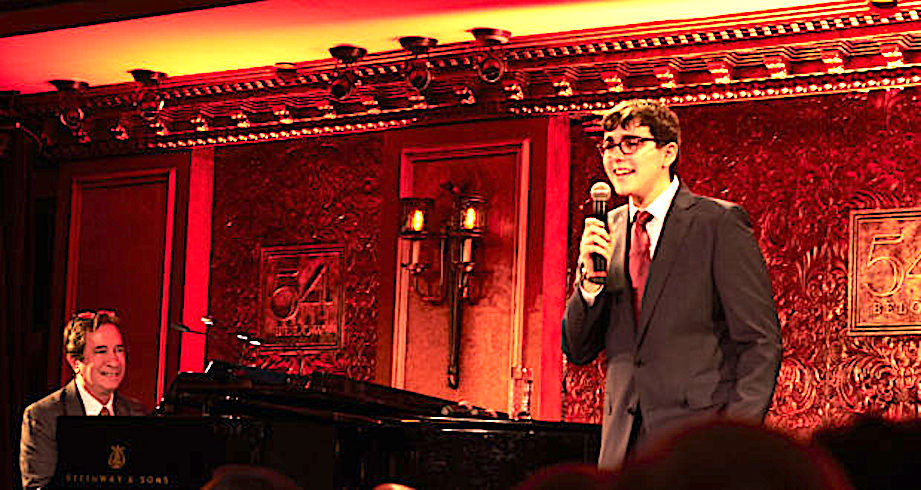 September 12, 2022: Preternaturally mature 15 year-old Charles Kirsch apparently got the Broadway bug at seven when he saw the revival of On the Town. August 2022, with pandemic time on his hands, the teenager inaugurated weekly theater podcast Backstage Babble. Knowledge, insight, grace, and appreciation mark signature interviews. One hundred twenty episodes and two years later a beautifully produced anniversary celebration arrived at 54Below with bells on. Kirsch is as well spoken and gracious on stage as he is without an audience.  54/Below was packed and buzzing.

The evening opens with David Jackson and David White recreating “Maybe My Baby Loves Me,” (Robert Wright/George Forrest), the two Jimmy number they originated in 1989’s Grand Hotel. Evoking an era of style and sophistication, the duo is easy on stage, flirting with the audience. Harmony is deft, chemistry warm. Bright-eyed delivery evokes a sigh of nostalgic pleasure. On the verge of leaving on the national tour, White was asked to join the Broadway company. With 3 ½ hours rehearsal, he was told, “Whatever you can remember, do.” Jackson welcomed his counterpart with roses. A deep friendship began.

Kirsch bonded with actor Charles Busch over their love of Peter Panwhom the artist played in a Transport Group production. Busch tells us he doesn’t know what he’s doing among these musical performers, but has certainly seen his share of theater. Four successive productions of Stephen Sondheim’s Follies, the first in 1971, each elicited a different response as he grew into understanding. The last was “devastation.” Busch then refutes his own statement about belonging with an extremely subtle and moving rendition of “Buddy’s Eyes.”

Kurt Peterson played young Buddy in the original Broadway production of Follies. He remembers watching Dorothy Collins (who played Sally) exude joy and gratitude for being able to do something she loved, a feeling he shares. The artist sings a medley of songs from musicals in which he was cast, Dear World (Jerry Herman), Follies (Sondheim) and The Baker’s Wife (Stephen Schwartz). Years drop away with the last, “I’m in Love Again.”

Jill O’Hara, who starred in 1968’s Promises, Promises (Burt Bacharach/Hal David) alas has laryngitis and is unable to sing. O’Hara tells the story of being so nervous the night before her audition, she had two drinks at a local bar. Unaccustomed to alcohol, the young actress poured out her aspirations and circumstances to a polite stranger she assumes found her delusional. She affectionately recalls Jerry Orbach playing poker with stagehands every night (even the opening) before curtain, laying down his cards with perfect timing to appear on cue. “He was a prince.”

“I saw our next guest for the first time in 2014 when he stopped the show as Nostradamus,” in 2015’s  Something Rotten (Kasey Kirkpatrick/Wayne Kirkpatrick). Before that wonderful turn, Brad Oscar elicited similar response as Franz Liebkind in Mel Brook’s The Producers(2001). “Roles like that are gold,” the actor quips. “You have a great scene and let everyone else take over.” Launching into pre-song dialogue, wearing the character’s storm trooper helmet, Oscar presents an hysterically funny, full out version of “Haben Sie Gehort Das Deutsche Band.” Gestures, phrasing and accent are perfection.

Meg Bussert tells us of three simultaneous versions of Phantom, Ken Hill’s classically bent iteration, Andrew Lloyd Weber’s juggernaut, and a third version by Maury Yeston written, aborted, then finally produced for Houston Opera. Bussert played Carlotta in the third version just outside Manhattan and on that recording. “Maury wanted her to sound as if she’d had 20 years of bad technique…” With harpsichord like accompaniment, the artist offers an outstanding performance of “This Place is Mine,” adroitly comedic without slipping into camp, vocally superb.

Giving MD/pianist Michael Lavine ‘a little break,” John Rubinstein assumes the piano bench for “Growing Up,” a song cut from the La Jolla Playhouse production of Stephen Sondheim’s Merrily We Roll Along . It begins with seemingly absent minded whistling based on Rubinstein’s own backstage habit. The “ruminative soliloquy,” staged at the keyboard, is a complicated start/stop, melodically changing song whose accompaniment tracks back to “We Had a Good Thing Going.”

“The lady of a thousand voices,” Christine Pedi uses grandma’s “No Time at All” from Stephen Schwartz’s 1972 Pippin (in which Rubinstein starred) to showcase the channeling of a cavalcade of stars whose names are called out by Kirsch. These include, in part, gravelly Elaine Stritch, cupie doll Bernadette Peters, Liza Minnelli – the arms!, tight-mouthed Julie Andrews, and nasal Ethel Merman. We all join the chorus.

Len Cariou , who originated roles in Sweeney Todd and A Little Night Music among many, many others, offers “Can I Let Her Go” from Teddy and Alice (Hal Hackaday/music adapted from the work of John Philip Sousa, new songs by Richard Kapp). The musical about Teddy Roosevelt’s relationship with his feisty daughter starred Cariou in 1987. Here he’s a father about to give his “proudest possession” away in marriage. The actor is halting, subdued. “If she wants to go…” Hands collapse onto his knees. A fragile portrayal.

“Let’s welcome Beth Fowler who played Roosevelt’s wife Edith and was also in the original cast of Baby, ” (Richard Maltby/David Shire 1983). As Arlene in the latter, the actress  performed “Patterns” during previews to great acclaim, only to have it pulled at the Broadway opening. “There went my opportunity for a Tony,” she says. “Why are patterns haunting every move I make?…” she sings. Before us sits the very pregnant (character) Arlene, viscerally anxious, confused, and hopeful.

The last performer, Lee Roy Reams (42nd Street – Al Dubin and Johnny Mercer/Harry Warren – Broadway 1980) is respectfully introduced as “Mr.Broadway.” “I’ve worked with every single person on this stage tonight and we’re all here because you care so much and embrace our history,” the icon tells our host. Kirsch asks that Reams tell his 42ndStreet audition story:

The thespian was playing Cornelius Hackle in 1978’s revival of Hello, Dolly! when he heard that Michael Stuart was working on adapting 42ndStreet. He saw himself as Billy Lawler (William Powell in the film) for which Stuart thought him too young. Years later, when the piece was ready, he was asked to read for the role of choreographer Andy Lee. Having set his sights higher, he didn’t want to do it. “Go down and do what you do,” his partner Bob nudged. And he did. After the requisite ballad, Reams arranged for his friend Toni Kaye to join him onstage in a tap dance. Surprise!

Down the aisle loped Gower Champion. “You’re not right for Andy Lee,” the director declared. “I know,” Reams responded. “You’re right for Billy Lawler!” He got the job. A fabulous looking 80, Reams sings “Lullaby of Broadway” – “Oh please God let me hit this note- Let’s call it a daaay…” He does. A perfect finish to a thoroughly splendid evening.

Raise that banner high. May Charles Kirsch flourish. Listen, enjoy, learn, support. I look forward to the next one of these.

Michael Lavine adapted to every performer with brio and skill.