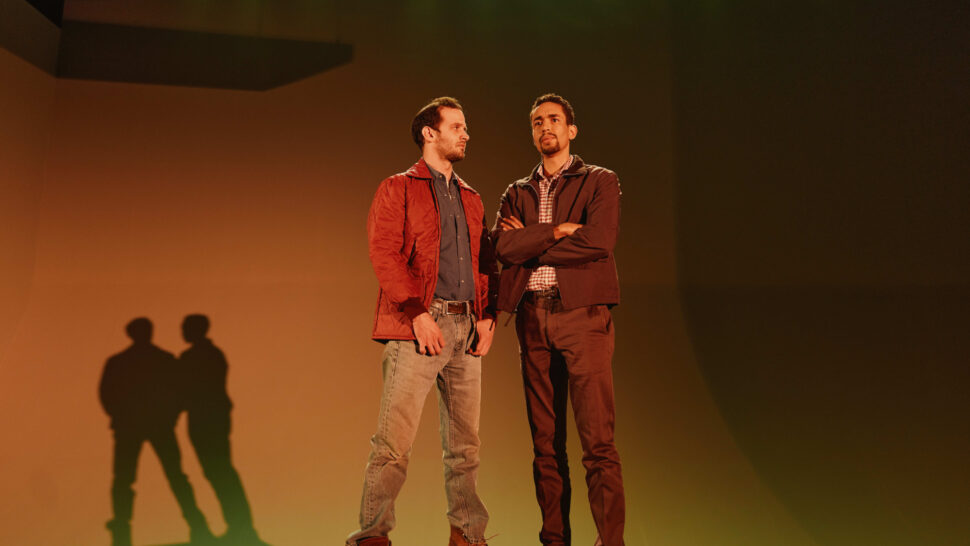 Will Brill and Kyle Beltran

May 29, 2022: If you can get past the complex title of this astute play, you will experience a powerful piece of theater that speaks so eloquently to the essence of humanity. The show’s run at the Signature Theatre has already been extended a few times with good reason. Sam D. Hunter’s A Case for the Existence of God takes place in a cubicle in Southern Idaho and follows two men who come together in surprising ways. Here are five reasons why you don’t want to miss it before it closes on June 5th:

Strange Loop tops list with 11 nominations, followed by MJ and Paradise Square with 10 each. The Tony Awards will be broadcast live from Radio City Music Hall on Sunday, June 12th.

May 9, 2022:  Nominations in 26 competitive categories for the American Theatre Wing’s 75th Annual Antoinette Perry “Tony” Awards® were announced today by Tony Award-winner Adrienne Warren and three-time Tony Nominee Joshua Henry. The 2022 Tony Awards are presented by The Broadway League and the American Theatre Wing. The list of nominations follows below. The Tony Awards mark 75 years of excellence on Broadway and will be hosted by Ariana DeBose, LIVE from the legendary Radio City Music Hall in New York City on Sunday, June 12, 2022 (8:00 – 11:00 PM, LIVE ET/5:00 – 8:00 PM, LIVE PT) on the CBS Television Network, and streaming live and on demand on Paramount+. The celebration will commence at 7:00-8:00 PM, ET/4:00-5:00 PM, PT with exclusive content streaming only on Paramount+. 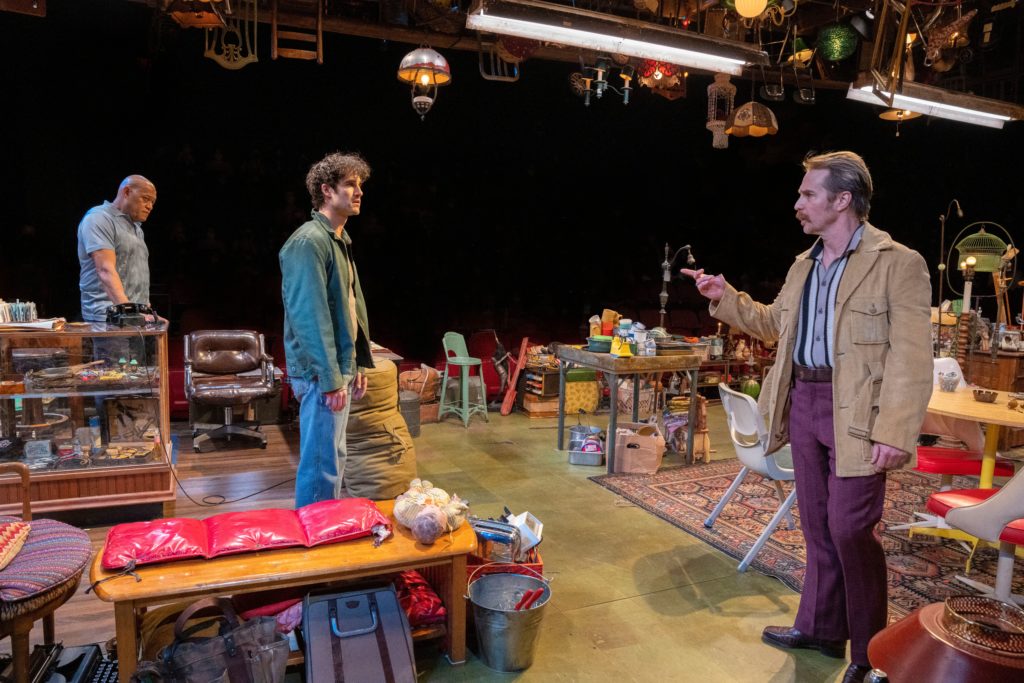 5 Reasons Why American Buffalo Has Lost its Luster

May 23, 2022: David Mamet’s work is notably controversial and quite often meant to rile up liberal audiences. His characters’ dialogue is famously riddled with harsh, quick profanity, and holds its viewers’ attention at every turn. With the Broadway revival of American Buffalo now playing at Circle in the Square Theatre, this reviewer saw very little of either of these traits. In fact, she felt very little of anything. The play concerns three small-time hustlers who want a bigger cut of the American dream. It premiered on Broadway in 1977, receiving the New York Drama Critics’ Circle Award for Best American Play, and has since been revived a number of times, yet one can’t help but question its appeal. This is this critic’s first time experiencing American Buffalo, and here are five reasons as to why this will most likely be her last: 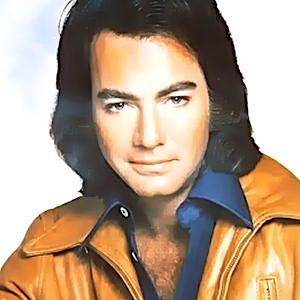 May 22, 2022: As the 2021-22 Broadway season comes to a close, 2022-23 is taking shape. A Beautiful Noise: The Neil Diamond Musical joins the handful of shows with firm dates and a theater. The bio musical about the 81-year-old singer-songwriter will play Boston’s Emerson Colonial Theater for a six-week run starting June 21 and then start previews at Broadway’s Broadhurst Theater on Nov. 2 prior to a Dec. 4 opening. The score will be composed of Diamond’s hits including “Sweet Caroline,” “Forever in Blue Jeans,” “Song Sung Blues,” and “Cracklin’ Rose.” The book will be by Anthony McCarten, Oscar-nominated screenwriter for The Two Popes and The Theory of Everything. Tony winner Michael Mayer (Spring Awakening) directs. Mayer has also staged such jukebox musicals as Swept Away, Head Over Heels, and American Idiot. Diamond will be played in Boston by Will Swenson, seen most recently in the CSC revival of Assassins. Casting for Broadway will be announced. 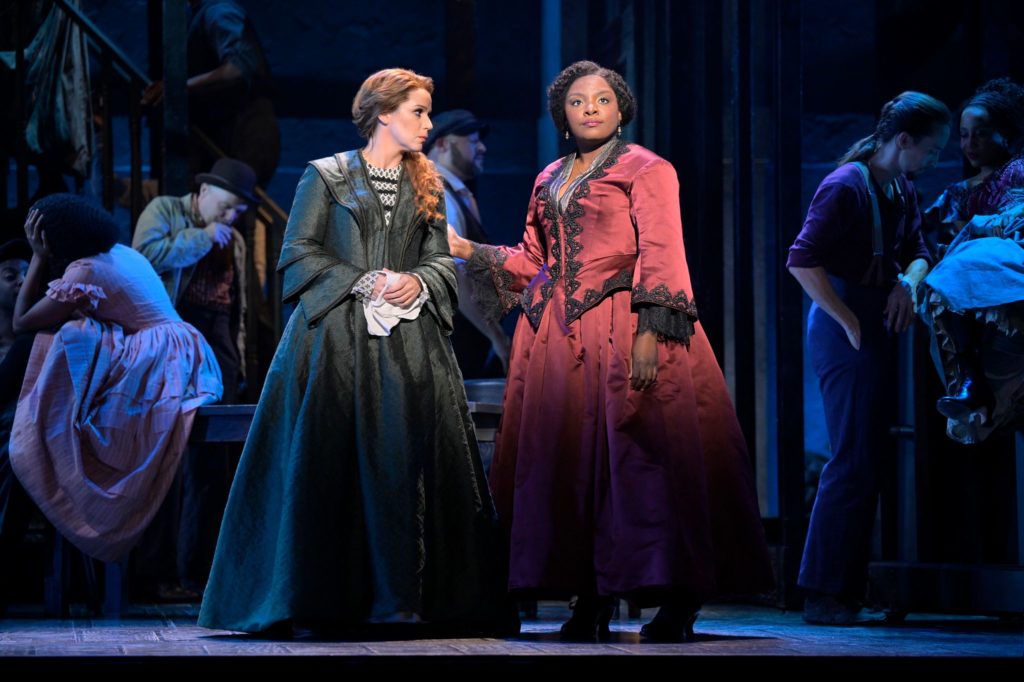 5 Reasons Why Paradise Square is Worth a Visit

May 24, 2022: Paradise Square is the important piece that we don’t see often these days: a great, period musical that teaches its audiences about a poignant slice of history. Set during the Civil War in the Five Points district of lower New York, where Irish immigrants shared space with free, but poor, Black citizens in places like gambling houses and bars, the story is centered on Nelly O’Brien (Joaquina Kalukango) who runs her own taproom. Audiences are introduced to her interracial family, which includes her white husband (an Irish police officer), and her fast-talking sister-in-law who is married to a Black reverend. He also shelters runaway slaves in search of freedom via the Underground Railroad. Got all that? Despite its mostly forgettable music, confusing premise and lackluster book by Christina Anderson, Craig Lucas and Larry Kirwan (not to mention an unnecessarily long run time), audiences will get on board quickly, as the story is sweeping. Though the show certainly isn’t perfect, here are our favorite reasons to give Paradise Square a chance: 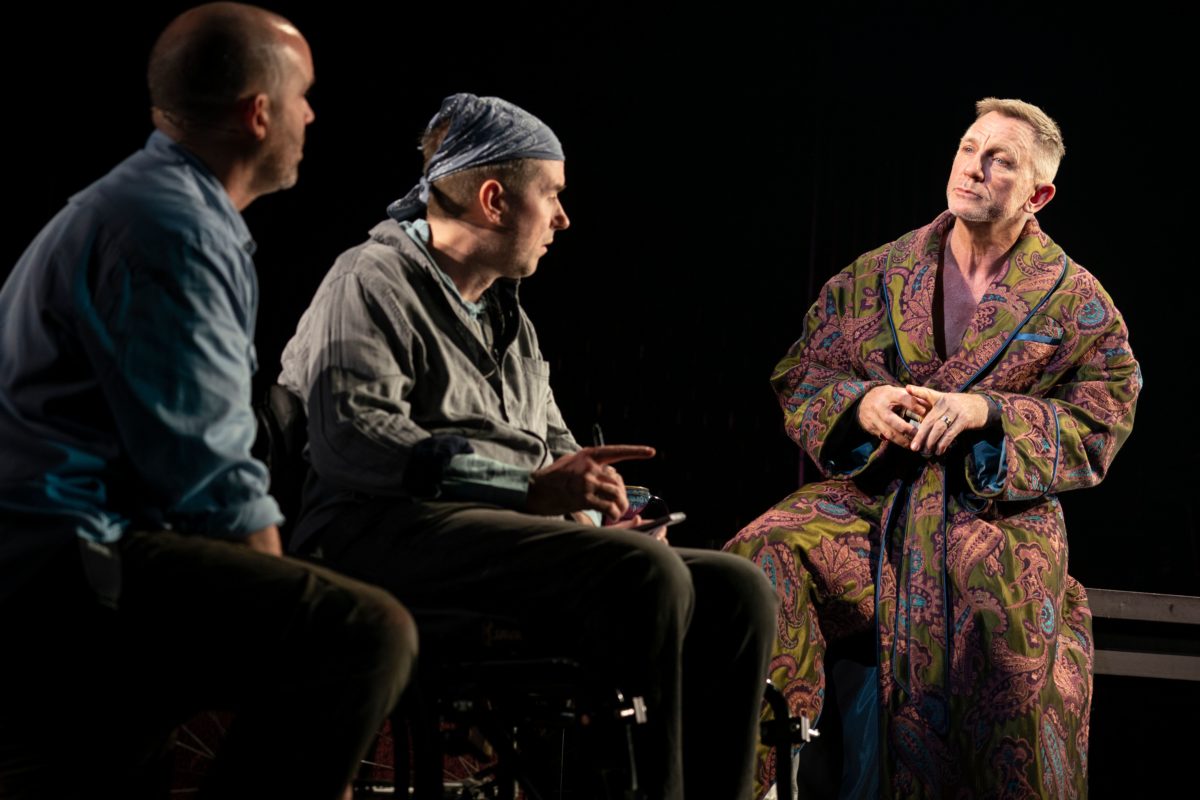 Five Reasons Why We Have Questions About Macbeth

May 22, 2022: Sam Gold certainly takes a unique spin on Shakespeare, though sometimes his forays into originality demonstrate too much liberality with the text. Though his 2019 Broadway run of the Glenda Jackson-led King Lear was a dud, his 2016 take on Othello at NYTW was profoundly unique and interesting. His current Macbeth, (in which he reunites with his Iago, Daniel Craig) lies somewhere in between. The Bond superstar is now the single-minded, droll Macbeth to Ruth Negga’s Lady Macbeth in a production fraught with oddities never before seen in the Scottish play. It left us with a plethora of questions: 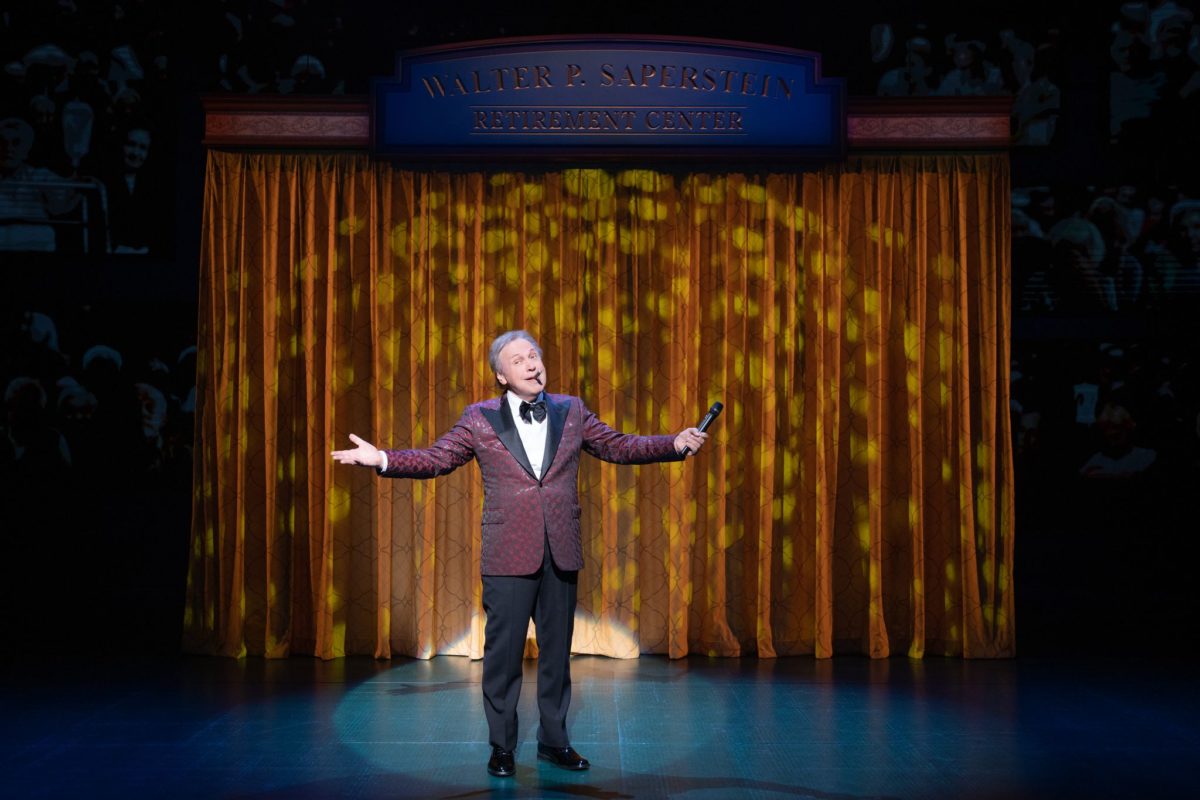 5 Reasons Why We Can Forgive Mr. Saturday Night for Being a Musical

May 22, 2022: The musical adaptation of Billy Crystal’s Mr. Saturday Night features a score by Tony winner Jason Robert Brown and Tony nominee Amanda Green…but unnecessarily so. This is the Billy Crystal Show, full of heart, Borscht-belt humor, and impeccable timing, but when he opens his mouth to sing, his talent is, well, laughable. With forgettable, throwaway music and Crystal’s complete ineptitude when it comes to vocal work, this would have checked all the boxes as a straight play. Despite this fact, Mr. Saturday Night, which features a book by Crystal, Lowell Ganz and Babaloo Mandel, is a delightful night of theater. Crystal is once again playing Buddy Young, Jr., just as he did on screen in 1982. He co-wrote, directed and starred in the film about a comedian whose huge ego often gets in the way of his success and alienates his family. Audiences may not be lining up for the soundtrack to this show, but they’ll certainly be smiling after seeing it. Here are five reasons why: 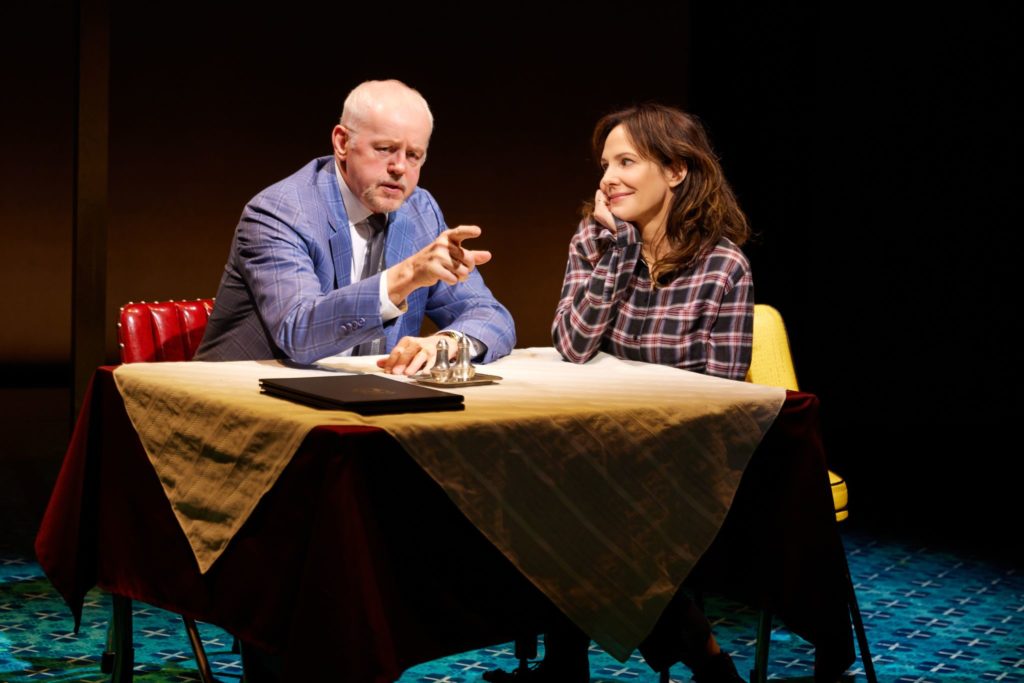 May 18, 2022: At its core it’s a play about child abuse, despite a number of fantastic metaphors and well-placed bits of humor. It encompasses gut-wrenching subject matter that still needs to be told, but thankfully it’s done extraordinarily well in its current production. Paula Vogel’s Pulitzer-winning play follows a woman (Mary-Louise Parker) coming to terms with a sexually abusive uncle (David Morse). The story is told through flashbacks and reunites the original cast and director (Mark Brokaw) from its 1997 Off-Broadway premiere. There is a tremendous wealth of spot-on choices from which to learn in this impeccable piece of theater. Five Reasons Why ¡Americano! is an Off-Broadway Gem

March 16, 2022: Tony Valdovinos tried to enlist in the Marines at the age of 18, only to find that he was not an American citizen. ¡Americano! is based on the true-life story of Valdovinos, who made the decision to enlist when he watched the Twin Towers fall on TV from his Arizona home.  With many reasons from which to choose, here are five for why ¡Americano! is perfect fare and just what we need Off-Broadway: 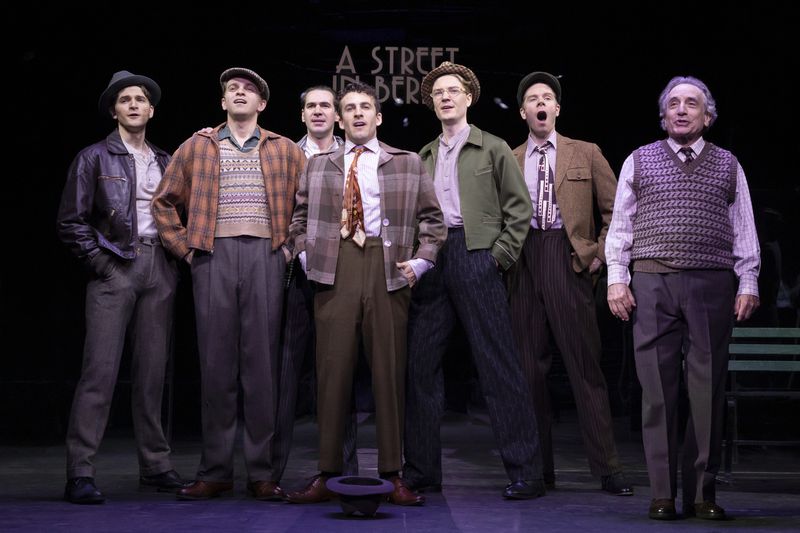 May. 15, 2022: With the upcoming closing of the National Yiddish Theatre Folksbiene’s Harmony: A New Musical, one can’t help but wonder why it is getting an original cast recording amidst talk of an uptown transfer. The premise of Harmony is intriguing and lays the groundwork for engaging theater, but it crumbles quickly: The Comedian Harmonists, a singing group of six young men in 1920s Germany broke the mold of entertainment with their meticulous harmonies and simultaneous antics; they even went on to produce many hit records and appeared in a number of films. Three members were Jewish and one was married to a Jewish communist activist, facts that provide the political and devastating background for their story being told on the New York stage for the first time. It is written by Barry Manilow and Bruce Sussman, choreographed by Warren Carlyle (The Music Man) and stars the delightful Chip Zien (Into the Woods). So where did this snoozer of a musical go awry?

5 Reasons Why Birthday Candles is Worth Celebrating

May 9, 2022: In the swiftly-moving, 90-minute Birthday Candles, we see a woman celebrating her birthdays from ages 17 through 107 through the art of baking a special cake. It’s a simple premise, yet incredibly complex in its intricacies and execution as it challenges audiences to leave theaters with dry eyes and without the urge to call their mothers. Here are five reasons why the tissues are well-worth it: 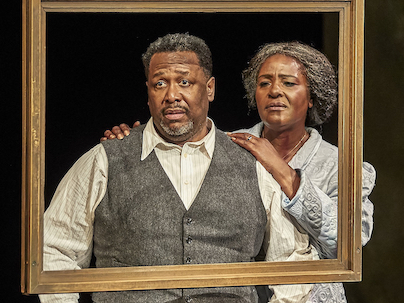 Wendell Pierce and Sharon D. Clarke in “Death of a Salesman”.

May 3, 2022: Willy Loman will soon be returning to Broadway for the sixth time. A 2019 London production of Arthur Miller’s great American play Death of a Salesman with a mostly black cast will be opening on Broadway during the 2022-23 season. Wendell Pierce (The Wire, Serious Money, The Piano Lesson) and Sharon D. Clarke (Caroline, or Change, Doctor Who) will repeat their roles as Willy and Linda. Pierce was nominated for an Olivier Award and Clarke won for this production when it transferred from the Young Vic to the West End. Clarke recently made her Broadway debut in a well-received revival of Caroline, or Change and is a front runner for this season’s Tony Award for Best Actress in a Musical. She is well-known to Doctor Who fans for her recurring role as Grace who was killed by a nasty alien and made occasional re-appearances from the dead on Season 11 and 12. 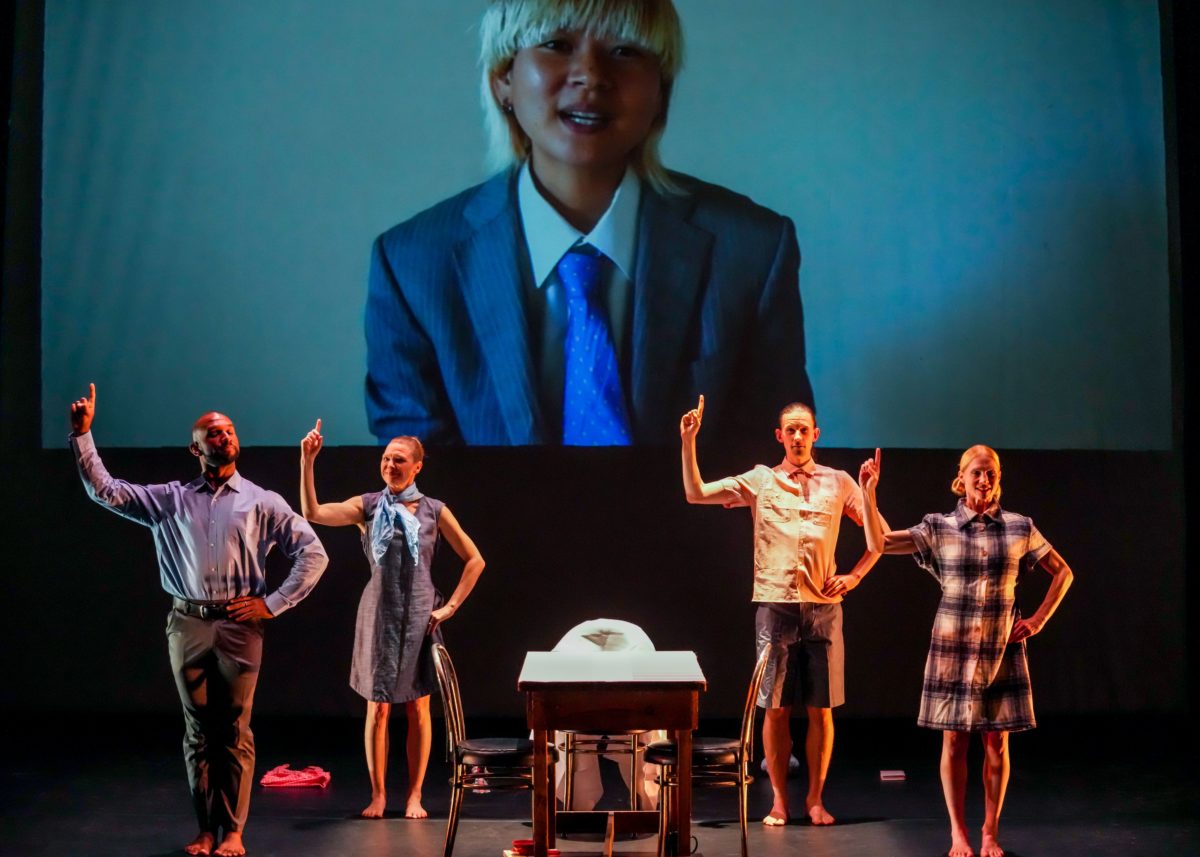 May 3, 2022: Tiffany Mills Company’s Homing, which celebrates the home through video, dance, music and spoken word, a work whose seeds were planted during the height of the pandemic and nurtured in workshops last May, has finally bloomed in its premiere this April as part of La MaMa Moves! Dance Festival. 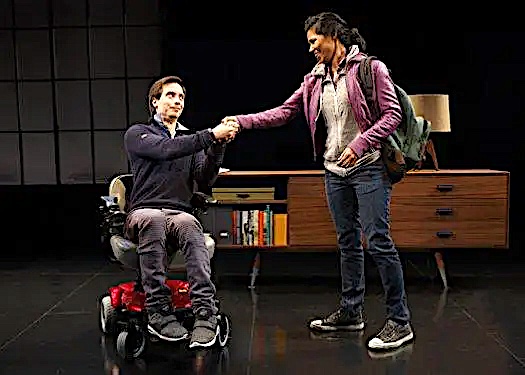 Greg Mozgala and Jolly Abraham in “Cost of Living”.

May 1, 2022: Manhattan Theater Club will produce Martyna Majok’s Pulitzer Prize-winning Cost of Living on Broadway at the Samuel J. Friedman Theater this fall (no specified dates). The play, which debuted at the Williamstown Theater Festival in 2016 and had its NYC premiere at MTC’s Off-Broadway City Center space in 2017, deals with four characters facing challenges ranging from physical disability to unemployment. Greg Mozgala, who has cerebral palsy and Katy Sullivan who was born a bilateral transfemoral amputee and is missing both legs, will recreate their roles from the 2017 production. Jo Bonney, the original director, will also return for the Broadway version. NBC’s The Wiz Live with Queen Latifah from 2015 comes to BroadwayHD on May 5.

May 1, 2022: BroadwayHD is excited to announce the latest addition to their streaming platform for May. Starting on May 5th they are bringing back NBC’s one time capture of The Wiz Live! from 2015, which will be available to stream for audiences everywhere out of the comfort of their homes. This thrilling sing-along capture features fabulous stars including Queen Latifah, Shanice Williams, Uzo Adubah, Ne-Yo, Amber Riley, David Alan Grier and many more.