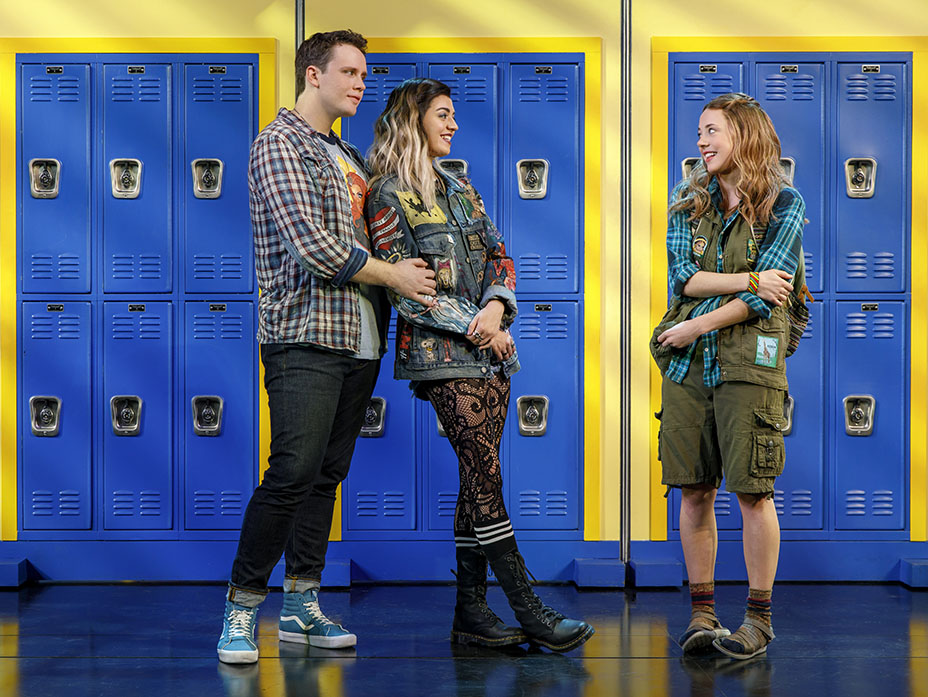 You could make the argument all three shows represent the shifting depiction of female roles and empowerment. Millworker Julie Jourdan, the struggling heroine of Carousel (1945), is a victim of spousal abuse and neglect, but sings of her undying love for the loutish carnival barker Billy Bigelow (“What’s the use of wonderin’/If he’s good or if he’s bad?/He’s your fella/And that’s all there is to that.”) Sarah Norman, the deaf leading lady of Children (1980), does stick up for herself and sets out on her own like Ibsen’s Nora, but she is presented as a figure in need of rescue by her hearing lover, a male literally speaking for her to the audience. To bring us up to date, Mean Girls’ teenaged protagonist Cady Heron challenges the shallow values of her high school by toppling the vicious queen bee Regina George and winds up becoming just like her nemesis. Both conveniently reform by the final curtain, but not before Tina Fey lets loose with stinging observations on how women allow themselves to be enslaved by image.

For this new production of Carousel, the Rodgers and Hammerstein evergreen, director Jack O’Brien has slimmed it down by cutting some numbers, toughened up Julie, and softened Billy’s brutality. A slap on the face has been replaced by a blow to the hand. Despite these alternations, O’Brien has retained the magic of the unforgettable score and the raw power of the heartbreaking story. Justin Peck’s graceful and inventive choreography accentuates character and give a vibrant sense of the 1890s New England community of the setting. There is electricity—both vocal and emotional—between Jessie Mueller’s spunky Julie and Joshua Clarke’s muscular Billy from their first tentative  encounter to their troubled marriage. Opera star Renee Fleming gives velvety tones to the immortal anthem of hope “When You Walk Through a Storm,” Lindsay Mendez lends sparkly comic relief as Julie’s best friend Carrie, and ballet dancers Amar Ramasar and Brittany Pollock give sensuous life to Peck’s movement. Purists may quibble with O’Brien’s innovations such as having the Starkeeper (a dignified John Douglas Thompson) silently observe the action long before his usual entrance in Act Two, but this is a ravishing and heartbreaking revival.

Just as Carousel is a shimmering example of a Golden Age tuner given a perfect modern production, Mean Girls is the very model of a modern movie-into-musical, taking the wit and charm of the source material and enhancing it with clever and character-specific songs by composer Jeff Richmond, Fey’s husband, and lyricist Nell Benjamin. Tina Fey has adapted her original screenplay into a sleek and fast-paced portrait of media-obsessed youth, as funny and smart as her TV projects such as 30 Rock and Unbreakable Kimmy Schmidt. Casey Nicholaw’s precise and quirky staging and choreography perfectly complement Fey’s dry humor. He’s not afraid to have a character start a song, change her mind, exit, and then start again, getting enormous laughs with each action.

As the fish-out-of-water Cady, Erika Henningsen admirably carries the show on her shoulders but she is surrounded by an ensemble of scene stealers. Taylor Louderman is deliciously bitchy as the nasty Regina with Ashley Park and Kate Rockwell hilarious as her toadying benchwomen. Barrett Wilbert Weed and Grey Henson are endearing and offbeat as the school misfits, Kyle Selig is the ideal romantic interest, and Kerry Butler is a multiple riot in several adult roles.

Children of a Lesser God also features a strong female lead but director Kenny Leon’s tame revival of an award-winning play about the deaf community fails to ignite any sparks. That’s mainly because there is no chemistry between Joshua Jackson, an actor know mainly for his film and TV work, and Lauren Ridloff, a former Miss Deaf America and a sensational find. Jackson plays well-meaning speech teacher James Leeds who falls in love with student Sarah (Ridloff). Their conflict derives from the profoundly deaf Sarah’s fervent resistance to speaking and James’ insistence that she learn to communicate by voice with the hearing world. Medoff’s script raises several meaty issues and it was a huge hit in its original Broadway run and the subsequent film version won an  Oscar (Marlee Matlin as Best Actress). But Leon’s staging is flat and the performances are uninvolving, save for the vibrant Ridloff.

Jackson deserves praise for taking on an enormous role—James seldom leaves the stage and speaks for himself as well as Sarah, but he fails to exude any charisma. Fortunately, Ridloff is a blazing comet of vitality, intensely conveying Sarah’s passionate stance for her rights and the difficult path this damaged but life-affirming woman has taken, all through sign language, gesture, expression, and movement. Too bad such a striking actress is confined to a lesser production of Children.