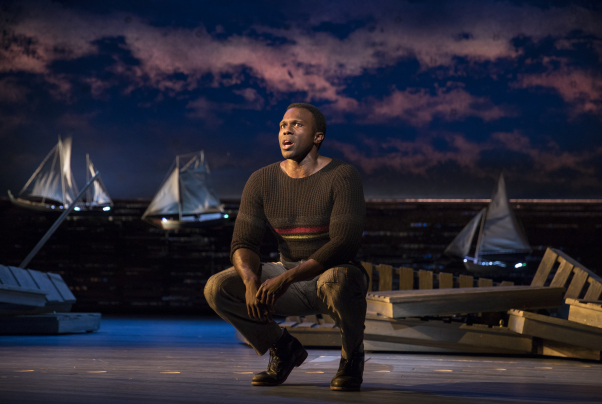 Still, Rodgers and Hammerstein’s popular lyrics give license to more probing concerns. Take the lyric, “That was a real nice clambake, we all had a real good time.” Listening to it now, one senses the artificiality it depicts, as well as its endearing sense of truthfulness. It’s an odd paradox, and one which expresses the sanguine spirit at the heart of this musical.  As designed by Santo Loquasto, the set, with its painted sea and skyscapes, reiterates that sense of artifice.

With the casting of Tony-nominated Joshua Henry, in the central role of Billy Bigelow, this story about morality, law, and social class, connects all too clearly to the history of racism in our country. Indeed, Billy himself is a study in contradictions. On one hand he’s cocky and charismatic, loving and loyal, and on another, he’s a harmful, cruel, man, who can’t deal with other people. It’s a role in which Henry (The Scottsboro Boys) is most dynamic – in voice, as well as in his physical presence.

Julie Jordan, the mellifluous, Tony Award-winning Jesse Mueller (Beautiful), is the girl at the heart of it all. As is her wont, Mueller is simple, and vulnerable as the mill worker, who falls head over heels over Billy. When Billy loses his job, she loses hers. And when poverty and pregnancy converge Billy becomes bitter and abusive.

Based on Ferenc Molnar’s play, Liliom, the tale about a rough and tumble carnival barker who captures the eye of an innocent young woman, but loses his life to crime, reads like many a naturalistic novel.  After Billy’s downfall, however, the story turns to a dialogue from purgatory. While Rodgers and Hammerstein’s 1945 adaptation ends differently, the musical’s blend of the real and the other worldly is astonishing, especially for its time.

That the narrative continues to flow so beautifully is the work of Justin Peck of the New York City Ballet whose choreography is as divine to watch, as it is integral to the story telling. Among the ensemble of dancers, Amar Ramasar plays the bully, Jigger, and Brittany Pollack, as Billy and June’s grown up daughter, are scintillating and robust. Both dancers are with the New York City Ballet.

Among these outstanding performers, Renee Fleming lends a mellifluous voice to the role of Nettie Fowler, Julie’s older cousin, who imparts wisdom and hopefulness. And Lindsay Mendez gives a transformative performance, turning June’s friend Carrie, from a comic strip version of a giddy girl to a socially appropriate, albeit flawed wife and mother.  She also sings marvelously, as does her oaf of a husband, portrayed here by Alexander Gemignani.

In addition, Broadway veterans, Magaret Colin as the possessive older woman in Billy’s life, and John Douglas Thompson, The Starkeeper who protects the rebellious Billy, are outstanding.

In spite of the tragic nature of the tale, the ending allows us to feel hopeful. And as a fateful romance, Julie and Billy’s love feels as desperate, and true as Romeo and Juliet’s.