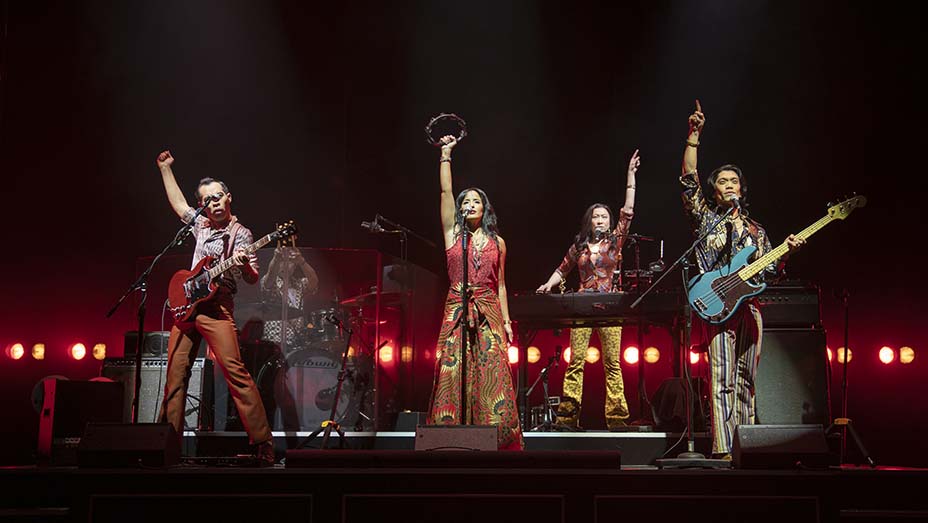 A fusion of electric guitars, drums and Cambodian lyrics, the music sounds like a culture twang expressing sharp dissonance. In this production, songs written by the Los Angeles based Cambodian band Dengue Fever are performed live. Here the musical style blends more easily with an American ear. Along with songs in Cambodian, the production includes popular tunes like The Times They Are A-Changin’.

As we know, the music that proliferated then came to an abrupt halt in 1975 when the Khmer Rouge put a stop to it and just about every other form of personal expression. In fact, many musicians were among the two million victims killed by Pol Pot’s regime.

Interestingly, the story here is told by the daughter of a survivor of the Cambodian genocide. Born and bred in Seattle, Neary (Courtney Reed) is a strong-willed young woman working for an NGO in Phnom Penh. Her official mission – to bring the Khmer Rouge to justice. Part superwoman, but mostly her father’s daughter, her research leads us on the trail to the Khmer Rouge in present day Cambodia and her family’s past.

On her trail is her equally persistent father, an American immigrant Chum played by Joe Ngo. We meet him in 2008 visiting his daughter and travel back to his youth (1975) as a musician in the onstage rock band. The story telling that weaves all of these stories into one beautiful outcome is obviously sentimental. But as directed by Chay Yew, it’s tightly woven, expressing the urgency of survival.

Particularly well cast as Chum, Joe Ngo has a rubbery physicality – morphing his slender frame from a cartoon etching that bends and sways, to a victim jolted by electronic shock, to an ageing dad trying to hold on to his only child.

In addition, Courtney Reed portrays the singer in the rock band her father played in as a youth. Her voice is soft, sultry and subtly sexy.

Better known to Broadway audiences, Francis Jue (M. Butterfly, Thoroughly Modern Millie, etc.) portrays the dreaded head of the cruelest and most dangerous camp of the Khmer Rouge. He also narrates the story with an omnipresence that turns from clownish to outright evil.

It’s fun to cheer for the good guys.

The surrealism that abounds in Haruna Lee’s work, Suicide Forest, seems hermetic, obtuse and off-putting for much of the play’s 90-minutes. Confounded by the fact that the play is in Japanese and English, the audience may find better clues in the pink stripped wallpaper that contrasts with a glowing blue picture of Mount Fuji than in the dialogue. Jian Jung’s scenic design is a Pandora’s Box of imagery.

Or perhaps one is better dwelling on the bizarre costumes by Alice Tavener. The most outré – worn by two women portraying themselves as kids with peppermint stripped hair – are poufy pink dresses, platform sneakers and white lace gloves.

The daughters of a suicidal Salaryman (Eddy Toru Ohno), portrayed in modern dress, the two girls, played by Akiko Aizawa and Dawn Akemi Sasito, act like slaves to a giddy sensibility. They’re definitely coy, obsessed with femininity and submissive to the point of perversity. In their own way they’re stereotypes of teenagers.

Later, after a journey into the forest where people are known to commit suicide, the actors drop their characters and become themselves. At this point the playwright’s commentary becomes more reflective and revelatory. It addresses the barriers of language and culture that are obviously defining of the Japanese-American immigrant experience.

At its best, Lee’s writing is sensitive and lyrical. She explains, “within the divided parts of myself- Japanese, American, Taiwanese- I’ve always felt a phantom pain…” It’s that pain which she asks her mother (Aoi Lee), a Butoh dancer, how to face. Is it “demon, or ghost, or god?”

More performance art than structured play, Suicide Forest evokes a completely different kind of theatrical vision. Still, it delves into the most elementary questions of identity – where we come from, what created us, and where we can go from there.