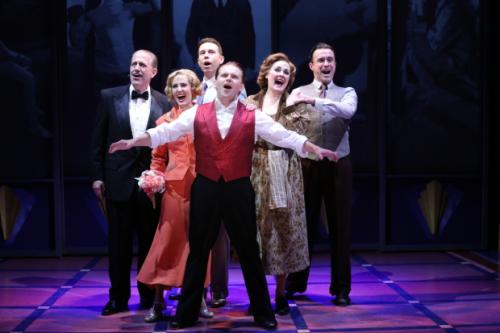 Broadway’s Robert Creighton plays James Cagney, a role he was born to play, while leading a cast of six, who tap dance through a score that blends original music with classic George M. Cohan favorites, including Give My Regards to Broadway, Grand Old Flag, and Yankee Doodle Dandy. The dazzling direction by Bill Castellino never lets the air out of an evening that flies by at a break neck pace with sizzling tap numbers choreographed by Joshua Bergasse. And the new music and lyrics are by Creighton and Christopher McGovern.

Cagney premiered here in New York back in May at the York Theatre for a limited run after debuting in Florida in 2009. Robert Creighton bares an uncanny resemblance to the legendary star and gives a heartfelt charismatic performance supported by an outstanding cast of talented actors. The fast paced song and dance biography begins in 1978 with Cagney at the SAG Awards, where he is being honored with a Lifetime Achievement Award. An equally wonderful Bruce Sabath plays Jack Warner, who plucked him from Broadway to produce most of his classic movies, is there to introduce him at the Gala Celebration. The story is told in recurring flashbacks chronicling Cagney’s rise to fame along with his conflicts with Jack Warner. The two haven’t seen each other in years and had a challenging on and off relationship for more than three decades.

The story with a sketchy book by Peter Colley is told in broad strokes through a series of flashbacks with over 20 musical numbers featuring the original songs by Creighton and McGovern, as well as the Cohan classics. The high spirited evening follows the actor’s life from his humble beginnings on New York City’s Lower East Side through his rise as a vaudeville song-and-dance man to his super stardom in Hollywood.

Cagney hits most of the highlights of the actor’s ascent to stardom and his struggle with his image in an insightful musical journey with fancy choreography by Bergasse that features exciting tap numbers. The score by Creighton and McGovern has fun songs like “Black and White,” “There’s Nothing I Won’t Do for You,” Falling In Love,” A Work of Genius,” and “How Will I Be Remembered.”

Cagney was an expert performer, who could do it all sing, dance, play the bad guy, the good guy, the patriot, the gangster. Apparently the supporting players do it all, as well. They sing, dance, and play numerous characters, switching costumes and personas with flawless  ease. They are Jeremy Benton, Danette Holden, Bruce Sabath, Josh Walden, and Ellen Zolezzi.  Jeremy Benton, as Bob Hope, has several dynamite tap numbers with Robert Creighton, that alone, are worth the price of a ticket. 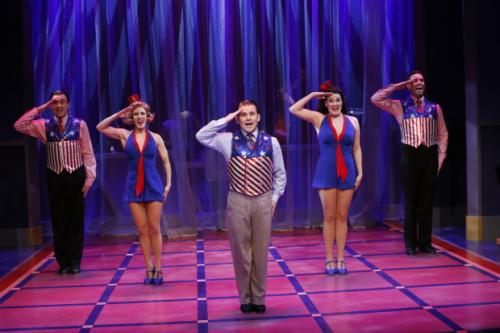