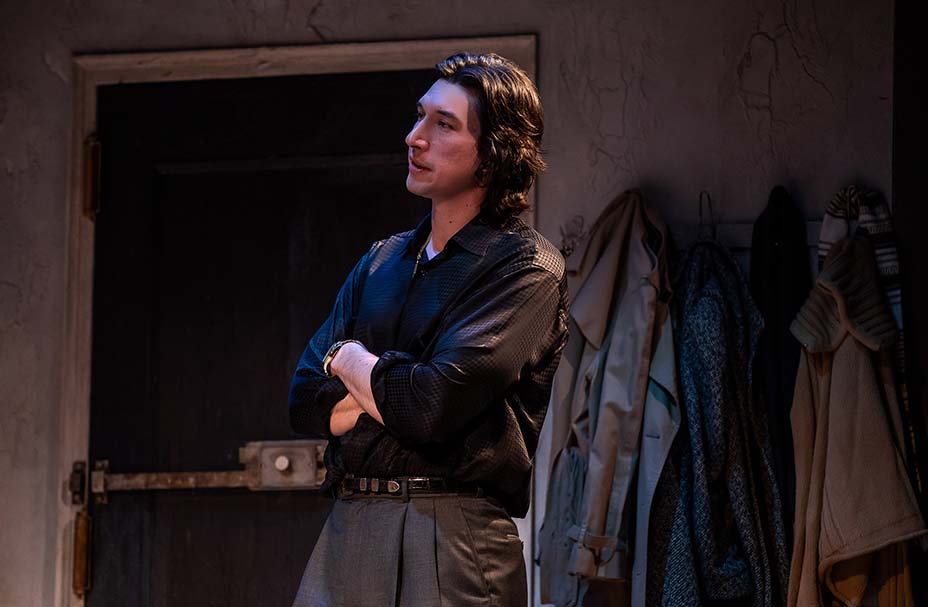 Driver plays Jimmy, nicknamed Pale, who says his job is to put out fires (the play is packed with references to heat and fire), a metaphor for solving problems; he’s actually a New Jersey restaurant manager and he doesn’t make his appearance until well into Act One of this two-act, two-and-a-half-hour play. His name comes from the cognac designation V.S.O.P., Very Superior Old Pale, although Pale uses the word “special” instead of superior.

Larry and Anna are still dazed with grief by Bobbie’s recent death in a boating accident. Then, in the middle of the night, Pale, Bobbie’s flashily-dressed, coke-snorting brother, bursts into the room.  A towering inferno of rage, he spews vulgarities like a David Mamet character wired on dope, screaming about a parking dispute he just had. Although he barely knew the late brother to whom he bears a strong resemblance, and, like the rest of his disinterested family, never saw him dance, he’s come to gather Robbie’s belongings. Despite being married with two kids, his body heat soon enough embraces Anna, with consequences that force each character to reconsider their loves, lives, and longings.

A character-driven play with only a wisp of a plot, and backed by David Van Tieghem’s nostalgic sound score of 80s tunes, Burn This is like a boiler that flares up with a whoosh whenever things begin cooling down, almost always when Driver’s on stage. Originally played by John Malkovich when his own career was on fire, Pale is the lost soul of a tornado in which swirl various contradictory parts: arrogance, homophobia, substance abuse, brutishness, volubility, sensitivity, humor, vulnerability, confidence, ignorance, and violence.

He also has a penchant for bizarre but pointedly amusing verbal riffs, one—which actually draws applause—involving the many purposes to which paper is used. He dresses expensively in clothes he handles with loving delicacy, is familiar with classical music, even correctly pronouncing Shostakovich, but brays like a Jersey mafioso, calls gays “faggots,” and has no idea what “truculence” means.

He’s purely a creature of the stage, someone no real person would hire for a responsible job, much less as the manager of a first-class, celebrity-populated restaurant, but he makes a perfect Beast to Anna’s Beauty, even though it’s impossible to accept their eventual pairing. Interestingly, the emotionally needy Anna’s attraction to Pale’s toxic masculinity reminded me of Cat’s for Guy in the soon-to-open The Pain of My Belligerence, which I’d seen the night before.

Driver, sharply dressed by Clint Ramos, with his muscular, 6’3” frame, head like an unfinished, granite sculpture, and shock of wild, black hair—which, as in other roles, he’s fond of running his hands through—blazes with animal sexuality. It’s the kind of thing Malkovich, with his phony-looking, long-haired wig, came nowhere near embodying. Driver occasionally overdoes it but there’s no denying the glowing flash of a performance that brings to mind the young Al Pacino in Does a Tiger Wear a Necktie.

Russell, with her slim-as-a-pin dancer’s body, which Ramos’s classy costumes both accentuate and glamorize, looks tiny next to Driver. As directed by Michael Mayer, though, she never dances; I could swear I recall Joan Allen, the original Anna, doing at least a few barre exercises. Wilson’s script makes Anna so placid in the face of Pale’s audacious rudeness that the actress is stymied from the outset; still, one would like to see more signs of her shock and distaste before she finally gets to douse his flames. It’s only then that she flares into memorably dramatic life.

Furr is perfectly satisfactory as the boyfriend, originally played by Jonathan Hogan, whose blandness and self-involvement is a clear setup to contrast with Pale’s menacing combustibility, while Uranowitz does well in the conventional, gay sidekick role, first played by Lou Liberatore. By 1987, Broadway plays about gay people were no longer rare but they were rarely this frank.

Burn This didn’t impress me the first time around as one of Wilson’s better works. While I still don’t consider it on the level of The Hot l Baltimore or Fifth of July, its revival is worth seeing just for the chance to see one of our most exciting young actors bring scorching machismo to Broadway.