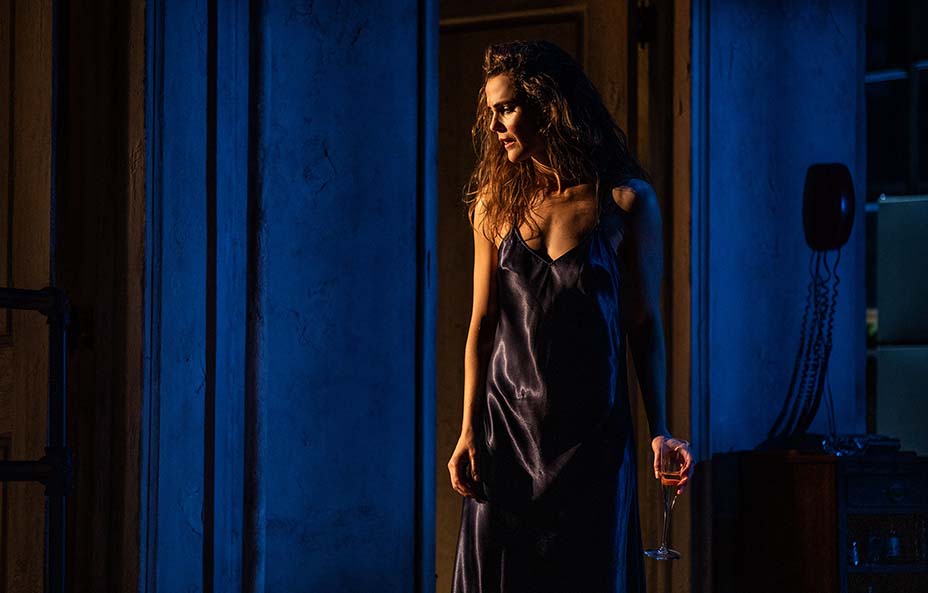 Driver, after all, is a man of large proportions. Tall, with an enviable six-pack, his arms and legs are large and thick. It’s not about his bulging muscles, but his physique. And that is precisely what he brings to the character of Pale, a man who is angry, loud, harsh, and fueled by passion.

Malkovich’s interpretation, in the play’s 1987 premiere, was by comparison dainty. He looked almost pretty with his long locks. And in some of the opening scenes, talking with his back to the audience, he drew us into his corner. Crazy as he was, he was sly, understated, and highly interactive. His intelligence and wit, along with his skill in mining Lanford Wilson’s poetic language belonged with the bohemians in the downtown Manhattan loft where he arrives.

But when Driver barges in, we immediately smell the rough-edged, blue-collar guy inside the Armani suit, and lizard shoes. He barges in, and it’s not really clear why. It’s true that Rob, his deceased brother had lived there, but the two of them had not had a relationship in years.

Clearly, he is on a quest, and for some reason his target is Anna (Keri Russell), a dancer who was uniquely inspired by her best friend Rob, a man she laments as if they had been lovers. Barging into the loft where Rob and Anna had lived, Pale runs into Larry, the charming, comedic Brandon Urbanowitz, and her suave screen writer boyfriend, David Furr who makes a dull character appear as needy and lost as they come.

Russell’s star quality is compelling. She’s sexy, and she finesses the unsteadiness of her character skillfully.

That Driver wins us over so completely is not a predictable outcome. His crude behavior matched by his physical dominance are off-putting at first. But the vulnerability that he reveals through his romantic attachment to Anna, makes him an incredibly touching and sympathetic character. His transformation is huge, and it’s believable.

Regardless of the play’s ambivalent critical reception when it premiered, it remains one of many gems in Lanford Wilson’s oeuvre. As a playwright, he wrote about the America he loved, the country which forged democracy. For that reason, his stories were often told by the disenfranchised, and those who lived on the fringes of our society.  The urban poor facing eviction in Hot L Baltimore, like the gay paraplegic Vietnam veteran in Fifth of July, are among the characters who created the texture and excitement of his drama.

More significant than the different qualities of the two actors who have portrayed the blue-collar hulk, Pale, on Broadway, is the societal shift that their acting reveals. Youthful ennui isn’t what it was in the ‘80s, nor are millennials of the same substance as Yuppies. Indeed, the tempestuousness, and melancholy at the loss of innocence, and the threat of an ugly world that awaits, is no subtle affair these days.

We observe this in the TV series, Girls, in which Adam Driver played one of the main characters. As written by Lena Denham, ennui and dissatisfaction are exposed in bold outspoken ways, and often in uncaring acts of sexuality.

That Michael Mayer carries Wilson’s universal tale into the light of contemporary life speaks to the universality of the play. Designer, Derek McLane sets the action in a spacious loft with soaring views of the Manhattan skyline, well beyond the garbage-laden barges that Pale describes looking out the window. His view – a world of garbage, and our view – a spectacular New York City skyline, aren’t necessarily meant to mesh.

And Clint Ramos’ spot on 1980s costumes leave little room for ambiguity. If you’re wealthy like Burton, or a showman like Pale, you are what you wear. And in some cases, they are that, which they don’t put on…There is ample nudity.

It’s the second act of this revival that packs a wham bam punch. Driver, in Brando-esque mode, fumbling at love, and too weak to take charge of it, is so vulnerable and the experience so intimate, we fall for him.