Want to ring in the New Year with a buck instead of a bang? Then the place to be is Madison Square Garden. January 15-17 NYC will see one of the world’s biggest influx of brawn and bravado with the Monster Energy Buck Off, part of the 2016 PBR Built Ford Tough Series. Its time for the international rivals of the Professional Bull Riders and some monster bulls to have you on the edge of your seat.  The rider’s goal is to say on these fierce, massive animals for a mere eight seconds, which some say is a heart-pumping, adrenaline-laced lifetime.

The edge-of-your-seat action is at 8 P.M. next Friday, 6:50 P.M. Saturday, and 1:50 P.M. Sunday. The heart-stopping action begins with the world’s Top 35 bull riders doing battle with foes 10 times their weight [average: 2,000 pounds] with arms of steel but only a rope tightly wrapped around one hand in an attempt to win their share of the $140,000 event purse.

The bull riders face one bull each during day during Rounds 1, 2, and 3. On Sunday, following the final round, the 15 riders with the highest cumulative scores will advance to the Built Ford Tough Championship Round. The event winner will capture glory and $30,000 or more.  The BFTS has awarded more than $1.2-million in prize money in New York City in the last decade. 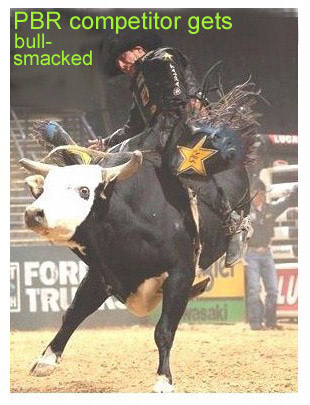 PBR champions have won more than $140-million. Twenty-eight earned more than $1- million, including Alves who, in just 54 months, won more than $5.2-million. Mauney and another world champion Justin McBride have surpassed $5.1- million in winnings.

The series features the Durabull Fighters [similar to daredevil rodeo clowns], who jump into action to deflect the bulls’ attention when riders are painfully ejected.

In 2015, the Monster Energy smack-down drew more than 46,000 fans to the Garden to set a new attendance record for the three-day competition. As “America’s fastest growing sport” (Forbes.com) and coverage on the CBS series, PBR expects another blockbuster NYC season.

This marks the 10th consecutive year in The Big Apple for what’s called “the toughest sport on dirt” [and one of the most dangerous], one of the first stops on the 2016 PBR series. The 18-state tour culminates with the finals in Las Vegas in October when the champion who amasses the most points during the season, will receive the World Championship belt buckle and a $1-million purse. The massive bulls go back to being pampered to await their next arena appearances.

The touring rodeo is quite an undertaking. It travels in18-wheel rigs which contain the bulls’ luxury accommodations, the arena’s steel set, stalls, and mount gates. Also trucked in for each engagement are 750 tons (1.5 million pounds) of specially-treated dirt packed eight inches deep.

The Professional Bull Riders is the world’s premier bull riding organization. It began as a dream of 20 bull riders 23 years ago and is now a global sports colossus, recently-acquired by show business super-agency WME-IMG, a global leader in sports, all arenas of entertainment, and fashion. Since the early 90s, the PBR Built Ford Tough Series has become a global phenomenon, with more than 2.5 million avid fans attending live events.

If you just hit the Powerball or won the Lottery, you might want to spring for this new VIP ticket option: the PBR Elite Seats, $500 each, located immediately adjacent to the chutes for an up-close view of the action. There’s a pre-event catered reception, backstage tours, and meet-and-greets with PBR’s top stars. To purchase, call (800) 732- 1727.