Bryce Edwards Frivolity Hour – A Good Time Was Had By All

January 23, 2023: Embodying performance style of another era risks becoming an acquired (audience) taste. My response? I’ve discovered a great one. Bryce Edwards inhabits the 1920s/1930s like a bespoke suit. The multifaceted musician plays at least the five instruments proffered tonight and sings in nasal, megaphone-like, wah-wah and eef fashion popular at the time. 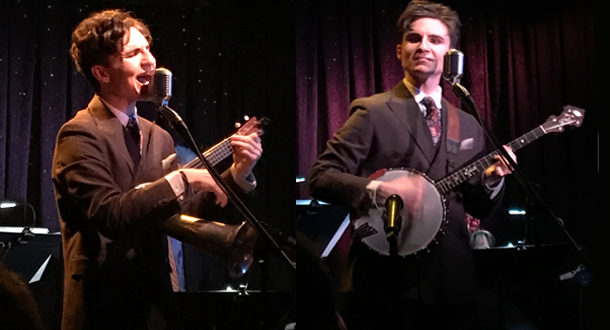 Bryce Edwards Frivolity Hour – A Good Time Was Had By All

January 23, 2023: Embodying performance style of another era risks becoming an acquired (audience) taste. My response? I’ve discovered a great one. Bryce Edwards inhabits the 1920s/1930s like a bespoke suit. The multifaceted musician plays at least the five instruments proffered tonight and sings in nasal, megaphone-like, wah-wah and eef fashion popular at the time.

Eefing is a cross between scat singing and mouth trumpet, often sung in raspy falsetto. According to Edwards, the term was coined by Cliff “Ukulele” Edwards (no relation) who was, by the way, the voice of Jiminy Cricket. “By the mid 1920s, the unique style spawned all kinds of imitators.” Up go the eyebrows; up and down an elongated hand that moves like hummingbird wings. Edwards knows his stuff. Patter is kept to identification. One can’t help wanting more.

“Dinah” (Harry Akst/Sam M. Lewis/Joe Young 1925) arrives by way of notes that seem to curve, back of throat hum, tenor vocal. Octaves climb and shimmy down. Conal Fowkes’ bass sashays; Scott Ricketts’ muted trumpet adds attitude. A really small uke partners with period scat: “Ah dat-dat-dat- a-doo.” “Home”: When shadows fall and trees whisper “Day is ending”/My thoughts are ever wending home…” sways by way of mellow, double-muted horn. (Peter van Steeden/Harry Clarkson/ Geoffrey Clarkson 1931) “I learned a lot of these songs off records,” Edwards tells us holding up a 1932 “disc” made of, wait for it, cardboard! (Plastic -coated thin paperboard.) “And it plays just as well as any nine year old cardboard!”

For “Everybody Loves My Baby” (Spencer Williams/Jack Palmer 1924), the artist plays banjo and, circling his neck, a shaped songophone (cousin of a kazoo). Novelty instruments were all the rage. The fast strum, hot jazz number showcases infectious do-wacka-do spirit. Grins erupt all around me. Harry Warren/Mort Dixon/Billy Rose’s 1931’s “I Found a Million Dollar Baby (in a Five and Ten Cent Store)” is a nod to Bing Crosby “who changed the way we sing.” Understated, with a touch of ba-ba-ba-boom, a smidgen of ba-ba-dup-do-do-do-day and a whistle, the song features personality horn. Listen for a parens of “Fascinatin’ Rhythm.”

At this point Fowkes switches bass for piano. The musician is a master. Skill, grace, clarity and mood enhance. Almost flat hands bend with finesse. He gets honky-tonk; dated rhythm and tone. Edwards again picks up his uke. “I learned this one from the great Gene  Austin,” he says. (One of the early crooners, Austin’s recording of “My Blue Heaven” sold over five million copies and was for a while the largest selling record of all time.)“Everything is Hotsy-Totsy Now” dances in, carbonated, playful: “Got myself a brand-new hotsy/She’s my hotsy I’m her totsy/Everything is hotsy totsy now/ What I did was pop the question/She said “what a great suggestion”/Everything is hotsy totsy now… (Jimmy McHugh/ Irving Mills 1925) They don’t write’m like that anymore.

Were Edwards a Hirschfeld, there’d be a mop of hair, wide shoulders, and multiple, overlapping images of five looong, fingers moving as one. (See the artist’s drawing of Tommy Tune’s feet.) The performer is dapper and infectiously happy onstage, but oddly never looks at the packed room, missing opportunity to connect.

“If I Could Be With You One Hour Tonight” (James P. Johnson/Henry Creamer 1926) on stroh ukulele, a uke with horn-like appendage directing sound into early recording devices. The song acknowledges trombonist, singer Jack Teagarden. Piano strolls. Horn puts on musical spats. Gatsby, here we come! Edwards warbles, scats, yodels, eefs, whistles, and speaks a verse. Uncomplicated lyrics are supported by a wide variety of expression.

Two songs performed as duets with vocalist Reilly Wilmit read cute, but don’t work. Vocally Wilmit is a Broadway style artist. A pretty voice doesn’t make up for singing without adjusting to the period.

“Brown Eyes, Why Are You Blue?” (George W. Meyer/Alfred Bryan 1925) begins with an actual megaphone. Light touch piano tickles the slightly bouncing vocalist. Horn steps back to subtle. The traditional “Saint James Infirmary Blues” is described as “a fun dirge.” A dragged-foot march (with occasional musical turn and dip), the tune showcases New Orleans piano and horn. Banjo picking is swift and precise. There’s a call and response with the trumpet. “…as we go aLAWNG,” Edwards sings.

“Avalon” (Buddy DeSylva/ Vincent Rose/Al Jolson 1920) “was recorded by Jolson recorded at a moderate tempo. We’ve been playing it faster and faster ever since.” Speedy he said and speedy it is. Bass is nonetheless defined. Horn winks. Strings fly. We close with trumpet leading the very small uke and music hall piano on “Has Anybody Seen My Gal?” (Percy Wenrich/Jack Mahoney 1914)

Think FUN! ‘Terrific musicians who understand not only what they’re playing but context; a leader who could’ve performed back when. As Dorothy Fields might say, the next time they perform, “Grab your coat and get your hat/Leave your worry on the doorstep...” and go. (“The Sunny Side of the Street” 1930 with Jimmy McHugh)