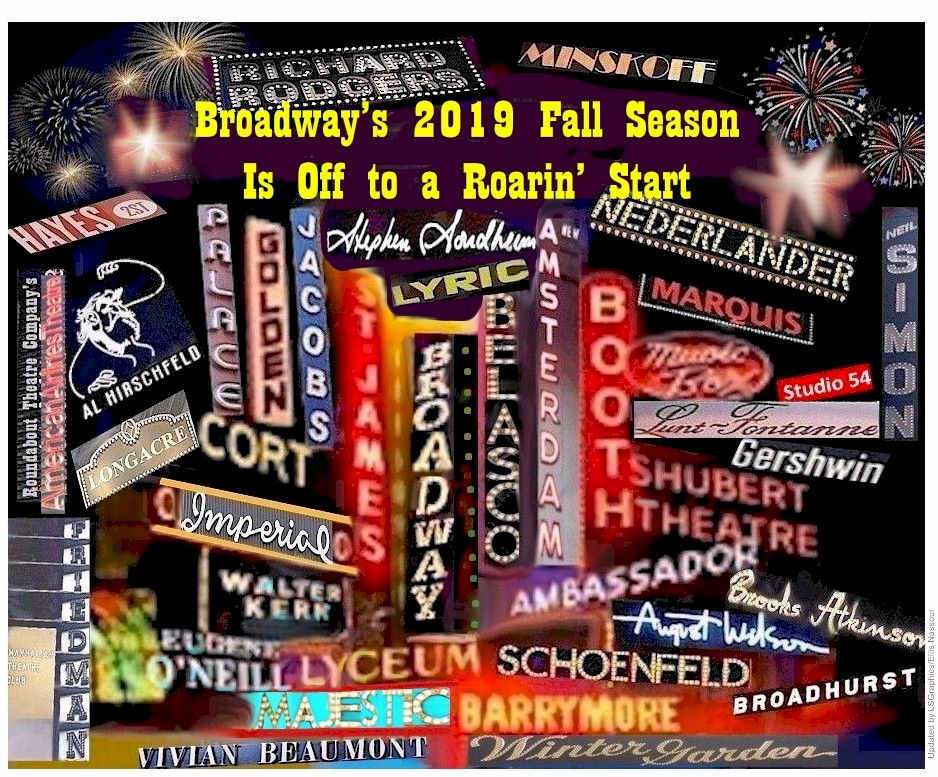 Yet, it doesn’t quite fell like Fall, in spite of some falling leaves. Summertime just doesn’t seem to wish to fade away.

Since the original announcement of what’s in store for the 2019-2020 Broadway season, the list – especially for Fall, has grown considerably; and it appears Broadway will be loaded with must-see dramas and musicals.

The 2019-2020 season got off to a bang of a start with the revival of Terrance McNally’s Frankie and Johnny in the Clar de Lune, starring  eight-time Tony winner Audra McDonald in a non-singing role, and Oscar, Tony, Golden Globe nominee Michael Shannon.

Sea Wall/A Life
Hudson Theatre — limited engagement ended September 29
Tony winner Simon Stephens and Olivier nominee Nick Payne’s acclaimed play, described as “a heart-filled exploration of the beauty of life, how sons become fathers, and the transformative power of love.” Oscar nominee Jake Gyllenhaal and Tony nominee Tom Sturridge (2013 Orphans) had audiences roaring in this transfer from the Public as they took them on a journey in two 45 minute monologues contemplating and confronting “birth, trauma, death, and the unknowable.”

Derren Brown: Secret
Cort Theatre– through January 4
From stage and TV, two-time Olivier Award winner Brown has mesmerized millions worldwide with his unique brand of “mind reading” (which he says he actually can’t do), persuasion, and psychological illusion. After a sold-out, critically-acclaimed run Off-Broadway at the Atlantic Theatre, the quite affable Brown debuts on Broadway. He heavily depends on audience members, constantly baffling his fans his brand of psychological magic – and a couple of mind-blowing illusions. Keep your eyes glued on the banana! King Kong is gone but he would had company if he just waited for Secret.

The Height of the Storm
MTC’s Samuel J. Friedman Theatre — extended through November 24
After its premiere in Paris, the complex play, told in present-day and flashbacks and set in a country house near Paris, opened on the West End starring powerhouse actors Tony winner Jonathan Pryce and Tony nominee Dame Eileen Atkins. French playwright Florian Zeller (The Father, The Mother), according to London’s The Times, “the most exciting playwright of our time,” said, “It was like I wrote the play specifically for them.” For 50 years, a couple’s lives have been filled with the pleasures and mysteries of an enduring marriage, until suddenly their life together begins to unravel; and they are faced with the inevitability of change. London’s The Timescalled it: “Adeeply moving new play that takes us to the edge of what it is to love.” Fortunately, both actors are reprising their highly-praised portrayal. Translated by Christopher Hampton (Les Liaisons Dangereuses); directed by Tony nominee Jonathan Kent(2016 Long Day’s Journey into Night) directs.  The run time is 80 minutes.

In previews, opening this week:

Freestyle Love Supreme
Booth Theatre — opening October 2, through January 5
Before there was Hamilton and In the Heights, there was this hip-hop, improvisational comedy co-written by Pulitzer Prize and Tony-winning Lin-Manuel Miranda, Tony winning director Thomas Kail, and Anthony Veneziale. Performers and guest stars such as Miranda, and, from Hamilton, Christopher Jackson, Tony winner Daveed Diggs, and Tony winner James Monroe Iglehart (Aladdin) will expect the unexpected as audience members spin them into riffs and musical numbers. In a Broadway first, the show will have several weekly 10 P.M. performances.

Slave Play
Golden Theatre– opening October 6, through January 5
The Old South lives on in the plantation the cotton fields with workers toiling to the crack of the whip. In its Off Broadway premiere at New York Theatre Workshop, Jeremy O. Harris’ play, directed by Robert O’Hara, became the most talked about play of the year, garnering intense critical acclaim and stunning audiences with its unflinching examination of race and sex. Harris was hailed as “one of the most promising playwrights of his generation.” The New York Times critic called it “the single most daring thing I’ve seen in theater in a long time.”

Linda Vista
Second Stage/Helen Hayes Theatre — opening October 10, through January 12
Steppenwolf’s Chicago and L.A. production [with the majority of the cast in tact] of Pulitzer Prize and Tony winner Tracy Letts (August: Osage County) takes “a brutally comedic look at a 50-year-old divorcee, played by Ian Barford (The Curious Incident of the Dog in the Night-Time), with a mundane job makes the move from a cot in his ex’s garage to a journey of self-discovery. His search for love and sex leads to the throes of a mid-life spiral as he attempts to reconcile the man he has become with the man he wants to be. Dexter Bullard directs.

The Rose Tattoo
Roundabout’s American Airlines Theatre — opening October 15, through December 8
Direct from the Williamstown Theatre Festival and returning for the first time in over 14 years, is Tennessee Williams’ 1951 Tony-winning Best Play. Oscar winner Marissa Tomei portrays fiery widow Serafina Delle Rose, a widow in a gossipy Gulf Coast town between New Orleans and Mobile who rekindles her desire for love, lust and life in the arms of a fiery truck driver, Alvaro, played by Emun Elliott (Marillion on Game of Thrones) in his Broadway debut. Trip Cullman (Choir Boy, Lobby Hero) directs.

The Sound Inside
Studio 54 — opening October 17, through January 20
Tony, Emmy and Golden Globe Winner Mary-Louise Parker returns to Broadway as a successful author and professor dying of cancer who befriends a young student in this riveting play from Williamstown Theatre Festivalby award-winning novelist, musician, and film director Adam Rapp, a Pulitzer finalist for 2006’s Off Broadway play Red Light Winter, in his Broadway debut as a writer. is a stunningly suspenseful piece of theater set in New Haven that focuses on a tenured professor, a talented student, and a troubling favor “that proves everyone has a story—the question is how it ends.” Will Hochman co-stars. ). Directing is David Cromer (The Band’s Visit, The Waverly Gallery revival).

David Byrne’s American Utopia
Hudson Theatre — October 4, opening October 20, through January 19
After a sold-out, year-long critically acclaimed world tour, the funky and poignant concert by  pop/rock icon Byrne (Talking Heads; Here Lies Love) lands on Broadway. He’s joined by 11 international artists to show the power of live music and “deliver an experience unlike anything else” (Billboard).Alex Timbers (Moulin Rouge) is a production consultant, with staging and choreography by Annie-B Parson.

The Inheritance: Parts One and Two
Ethel Barrymore Theatre — opening November 17
Matthew Lopez’s touching and wickedly hilarious play, inspired by E. M. Forster’s Howards End and staged in two parts (each over three hours) garnered rapturous reviews on the West End—termed by one critic as “perhaps the most important American play of this century.” Set at a gathering of New Yorkers, it gives “a panoramic view of gay life a generation after the height of the AIDS crisis” of the ‘80s and ‘90s as a group of gay men struggle to connect to the past and maintain a sense of history.It’s been touted as powerful a play as Angels in America. Original cast members Andrew Burnap, John Benjamin Hickey, Samuel H. Levine, and Kyle Soller reprise their performances. Multiple awards were for Best Play, Actor (Soller), and Director (Stephen Daldry), including Oliviers. Co-starring in the huge cast is veteran actress and two-time Tony nominee Lois Smith. Sets and costumes by Tony winner Bob Crowley, with original music by Paul Englishby.

Tina – The Tina Turner Musical
Lunt – Fontanne Theatre — October 12, openingNovember 7
Tony nominee Adrienne Warren (Shuffle Along…), who was hand-picked by Tina Turner and won huge acclaim in the hit West End production, reprises her role. The show sweeps audiences from Turner’s humble Nutbush, Tennessee beginnings, through her abusive marriage to Ike Turner, to her ascension to the throne of the Queen of Rock—revealing Turner didn’t just break the rules, she rewrote them. She dared to defy the bounds of age, gender and race to become one of the world’s bestselling artists. Co-produced by Ms.Turner, winner of 12 Grammys.

Jagged Little Pill
Broadhurst Theatre — November 3, opening December 5
Following a record-breaking, sold-out premiere at American Repertory Theater (A.R.T) last summer, a huge roster of producers [huger than usual for a musical] have banded together to bring this exceptionally relevant, absorbing, and much-anticipated show to Broadway. Music and lyrics are by rock legend (60 million albums sold) and seven-time Grammy winner Alanis Morissette and music by six-time Grammy winner Glen Ballard. If that isn’t pedigree enough, it’s directed by Tony winner Diane Paulus (Waitress, Pippin revival), with book, inspired by the themes and raw emotions laid bare in Morissette’s seminal album of the same name, by Oscar-winner Diablo Cody. Variety raved:“Triumphant! Not since Rent has a musical invested so many bravura roles with so much individual life.”A picture-perfect suburban family has cracks beneath the surface. They must choose between maintaining the veneer, or defiantly facing truths about themselves and the world around them. Movement direction/choreography is by Olivier winner Sidi Larbi Cherkaoui and arrangements and orchestrations by Tony and Pulitzer Prize winner Tom Kitt (Next to Normal, American Idiot). Entertainment.

Harry Connick Jr. – A Celebration of Cole Porter
Nederlander Theatre — November 24; opening December 8, through January 12
In this robust homage to legendary lyrist and composer Cole Porter (Kiss Me Kate, Anything Goes, many more), Tony nominee and Grammy and Emmy winner Connick (2006 The Pajama Game) will not only tickle the ivories and sing in the style that has sold 28 million records, but has also conceived this multi-media presentation and will direct as he performs songs from his new CD True Love: A Celebration of Cole Porter.

Among the stellar shows of the 2019-2020 winter season, will be the much-anticipated revival of Bernstein, Sondheim, and Laurents’ West Side Story from director Ivo van Hove (Network, 2016 The Crucible, 2015 A View from the Bridge); and the limited engagement revival of Neil Simon’s classic Tony nominated three one-act comedies Plaza Suite, headlined by Tony winner Matthew Broderick and Emmy winner Sarah Jessica Parker; and, in his Broadway debut as director, Tony winner and Emmy nominee John Benjamin Hickey (2011 The Normal Heart; TV’s The Big C and The Good Wife; upcoming The Inheritance).