August 23, 2021: Get ready for some totally outrageous and unfiltered fun on Thursday! BroadwayHD, the premier streaming service for live theater, will be bringing a brand new film capture of the 1970’s cult hit Women Behind Bars exclusively to the service on August 26th. 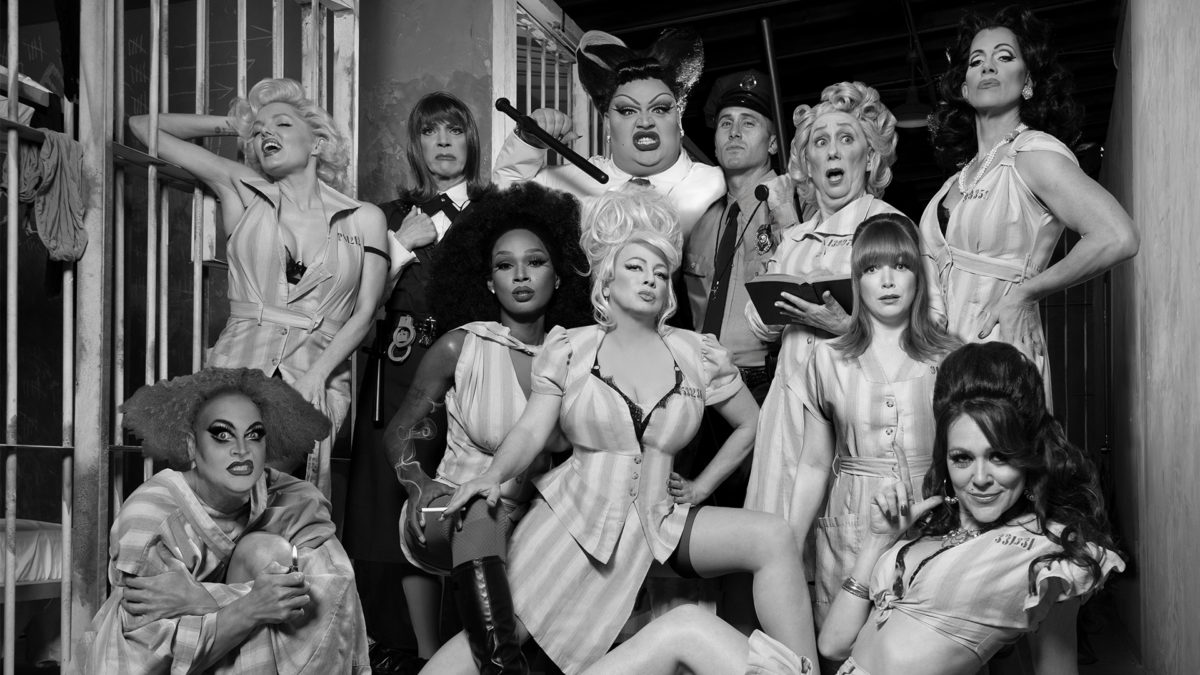 August 23, 2021: Get ready for some totally outrageous and unfiltered fun on Thursday! BroadwayHD, the premier streaming service for live theater, will be bringing a brand new film capture of the 1970’s cult hit Women Behind Bars exclusively to the service on August 26th.  Filmed in early 2020 at the iconic Montalban Theater in Hollywood, California, this brand-new production of the play from Tony and Grammy Award Winner Tom Eyen, who also penned the book and lyrics for Dreamgirls, is hosted by Kathy Griffin and stars Rupaul’s Drag Race All-Stars Eureka O’Hara, Ginger Minj, and Chi Chi Devayne, John Waters icons Traci Lords and Mink Stole, as well as  “the hostess with that something…..extra,” Miss Coco Peru and Suzie Kennedy, renown Marilyn Monroe impersonator and Britain’s Got Talent contestant. The cast is rounded out by Wesley Woods, Poppy Fields, Tatiana Monteiro, and Adrienne Couper Smith.  The show, which has been reimagined for today’s audience, was originally produced as a film by Winbrook Entertainment.  The 2020 stage production is directed by Scott Thompson and produced for the stage by “Just Pow” Productions.

Women Behind Bars parodies the prison exploitation films produced by Universal, Warner Brothers, and Republic Pictures during the 1950s.  The dark comedy is set in the Women’s House of Detention in Greenwich Village.  Among the range of women within the prison are an innocent young woman, a chain smoking streetwise tough girl, and a delicate southern belle reminiscent of Blanche DuBois.  The innocent young woman was framed by her husband on a charge of armed robbery, and is subject to a harrowing  seven years in prison.  She is ultimately broken by the system and leaves jail as a hard-edged, gum chomping drug dealer.  These women are overseen by the prison’s sadistic matron and her tough sidekick.  The original production at the off-Broadway Astor Place Theatre opened on May 1, 1975, featuring Pat Ast. The play was revived in 1976 at the Truck and Warehouse Theatre in New York with Pink Flamingos star DIVINE as the Matron. It quickly developed a cult following and became a success. The play was revived in Los Angeles in 1983 featuring Adrienne Barbeau.  Sally Kellerman and Linda Blair later joined the cast.

Kathy Griffin said, “Gays! Straights! Everyone in between! Audiences around the world can watch the latest revival of “Women Behind Bars” on BroadwayHD this month.  That’s right, for those of you that weren’t able to see me host this incredible show in front of a live, sold-out audience at the Montalbán Theatre in Hollywood, you can stream, as the kids say, all the raunchy, lovingly offensive, non-stop hilarity from this amazing cast.  I can’t think of a better way to continue to celebrate Pride that doesn’t involve rainbow glitter body paint getting caught in your naughty cracks.  Enjoy!”

Ginger Minj said, “What do you get when you combine one of the most infamous cult plays with an iconic queer cast? Two incredible hours in the crazy, sexy, ridiculous world of Women Behind Bars! Not only is it fabulously fun, it’s history in the making! And fabulous to see it all premiere on BroadwayHD!”

Eureka O’hara said, “It was great working with a John Waters loving cast and a true honor to play a role originally played by my idol Divine. It was also incredible working with the amazing Chi Chi DeVayne. It was truly a privilege to stand alongside them on stage; little did we know this would be their last project.  And now, to have WBB have its premiere on BroadwayHD just tops it all off.   I’d do this again in a minute, chickens!”

Bonnie Comley and Stewart F. Lane, co-founders of BroadwayHD said, “Women Behind Bars was one of those jewels that did not get to be experienced by a wide audience with the pandemic shutting it so early in 2020.  We feel honored to be able to bring the production to a global audience through our platform, enabling viewers to enjoy this creative and campy performance.”

BroadwayHD introduces award-winning theater from all across the globe with both classic and modern productions.  Fans can expect to see the full works of Shakespeare from the Royal Shakespeare Company, awe-inspiring performances from Cirque du Soleil and a selection of the world’s greatest musicals including Kinky Boots, Cats, 42ndStreet, She Loves Me, Rodgers & Hammerstein’s The King and I, The Sound of Music, andAn American in Paris. All performances are adapted specifically for streaming audiences to maximize the entertainment experience.  To learn more about BroadwayHD, visit www.broadwayhd.com.