October 3, 2022:  BroadwayHD, the premiere streaming service for live theatre, announced today that they will be bringing Space Dogs to their platform for its exclusive worldwide debut on October 13, 2022. 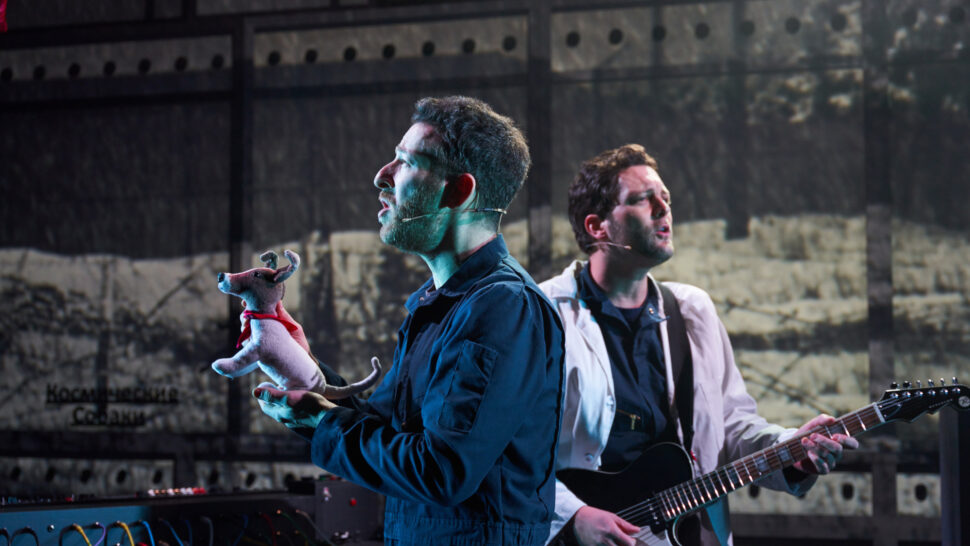 October 3, 2022:  BroadwayHD, the premiere streaming service for live theatre, announced today that they will be bringing Space Dogs to their platform for its exclusive worldwide debut on October 13, 2022.

Stewart F. Lane and Bonnie Comley, co-founders of BroadwayHD said, “Space Dogs is an incredible live capture that launches viewers on an unforgettable journey through space. We’re thrilled to celebrate its exclusive worldwide premiere with our subscribers.”

“Space Dogs was conceived and developed with a live capture in mind, so we’ve been delighted with BroadwayHD’s amazing work on this show,” said MCC Theater Co-Artistic Director Will Cantler. “Even if you saw it in the theater you will want to check out this gorgeous film!”

BroadwayHD introduces award-winning theatre from all across the globe with both classic and modern productions.  Fans can expect to see the full works of Shakespeare from the Royal Shakespeare Company, and a selection of the world’s greatest musicals including Kinky Boots, Cats, 42nd Street, She Loves Me, Les Misérables, Rodgers & Hammerstein’s The Sound of Music, and An American in Paris. All performances are adapted specifically for streaming audiences to maximize the entertainment experience.

Founded in 2015 by Tony Award®-winning producers Stewart F. Lane and Bonnie Comley, is the only streaming service offering premium full-length stage plays and musicals captured specifically for multi-platform viewing to theatre fans across the globe. In addition to exclusive live-streamed content of the world’s best productions, Broadway offers subscribers unlimited on-demand access to a library of more than 300 theatre productions from Broadway, The West End and beyond.  If You Can’t Get to Broadway, Get to BroadwayHD.

MCC Theater is one of New York’s leading nonprofit Off-Broadway companies, driven by a mission to provoke conversations that have never happened and otherwise never would. Founded in 1986 by Bob LuPone (1946-2022) and Bernie Telsey, and later joined by co-Artistic Director Will Cantler, as a collective of artists leading peer-based classes to support their own development as actors, writers and directors, MCC fulfills its mission of through the production of world, American, and New York premiere plays and musicals that challenge artists and audiences to confront contemporary personal and social issues, and robust playwright development and education initiatives that foster the next generation of theater artists and students.

Over the years MCC has worked with thousands of students through the innovative MCC Youth Company, school partnerships, and student matinee programs.

MCC opened the doors to its new home in Manhattan’s Hell’s Kitchen neighborhood, The Robert W. Wilson MCC Theater Space, on January 9, 2019, unifying the company’s activities under one roof for the first time and expanding its producing, artist development, and education programming. MCC founding Co-Artistic Director Bob LuPone sadly passed away on August 27, 2022. MCC continues to honor his fierce need for engagement with the art, the artists, and the audience and remember the profound impact he had on everyone who entered its spaces.
Photo: Daniel J Vasquez