April 21, 2022: BroadwayHD, the premiere streaming service for live theatre, announced that they will be bringing Little Women to their platform for its exclusive worldwide debut on April 21. 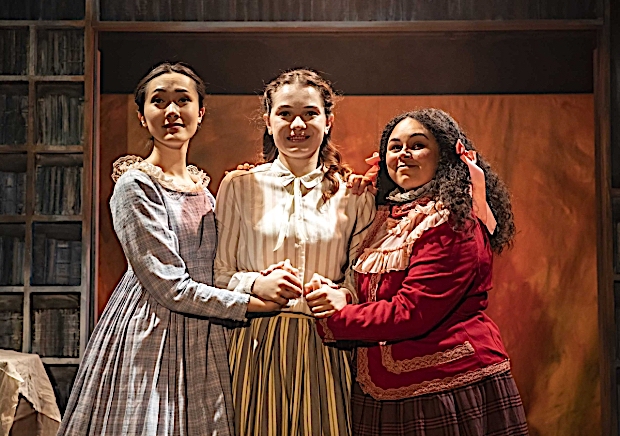 April 21, 2022: BroadwayHD, the premiere streaming service for live theatre, announced that they will be bringing Little Women to their platform for its exclusive worldwide debut on April 21.

Little Women follows the adventures of the four March sisters – Jo, Meg, Beth, and Amy. Jo, the second eldest of the March daughters and an aspiring writer, receives yet another rejection from a publisher. Her friend, Professor Bhaer, tells Jo she can do better by making her stories more personal. Begrudgingly, Jo weaves the story of how she and her sisters grew up in Civil War America – a tale of self-discovery, heartache, hope, and everlasting love.

Little Women’s book was written by stage and screenwriter Allan Knee (Finding Neverland, The Astonishing Times of Timothy Cratchit), music by Grammy Award-winner Jason Howland (The Lonesome West, Handel’s Messiah),  and lyrics by Mindi Dickstein (Benny and Joon, Toy Story – The Musical). The musical was directed by Bronagh Lagan with set and costume design by Nik Corrall, musical direction by Leo Munby, orchestrations by Andy Collyer, choreography by Sarah Golding, lighting design by Ben M. Rogers, sound design by Paul Gavin and casting by Jane Deitch. The musical was filmed live by Katy Lipson for Aria Entertainment at Park Theatre in the West End. It was executive produced by Bonnie Comley, Stewart F. Lane and Gio Messale for BroadwayHD.

Stewart F. Lane and Bonnie Comley, co-founders of BroadwayHD said, “Little Women is a stunning live capture that transports viewers right into a musical filled with adventure and self-discovery. We’re thrilled to celebrate its exclusive worldwide premiere with our subscribers.”

Little Women was produced by Katy Lipson for Aria Entertainment, Hope Mill Theatre and Knockhardy Productions, in association with Park Theatre. It was co-produced by Bonnie Comley and Stewart F. Lane and Katy Galloway Productions.

BroadwayHD introduces award-winning theatre from all across the globe with both classic and modern productions.  Fans can expect to see the full works of Shakespeare from the Royal Shakespeare Company, and a selection of the world’s greatest musicals including Kinky Boots, Cats, 42nd Street, She Loves Me, Les Misérables, Rodgers & Hammerstein’s The Sound of Music, and An American in Paris. All performances are adapted specifically for streaming audiences to maximize the entertainment experience.  To learn more about BroadwayHD, visit www.broadwayhd.com. If you can’t get to Broadway get to BroadwyHD