2020: New York celebrated its fifth BroadwayCon  during the weekend of Friday, January 24th through Sunday. January 26th.  This brought thousands of theatre fans from all over the country and beyond came to the Hilton Hotel on 6th Avenue and 53rd Street.  Many came in costumes, brilliantly created of characters from various shows.  There were the likes of “Beetlejuice”, Anna from “The King and I”, “Evita”, “Hello Dolly”, Frozen” “Newsies” “Waitress”, Little Mermaid” to name a few, it was overwhelming. 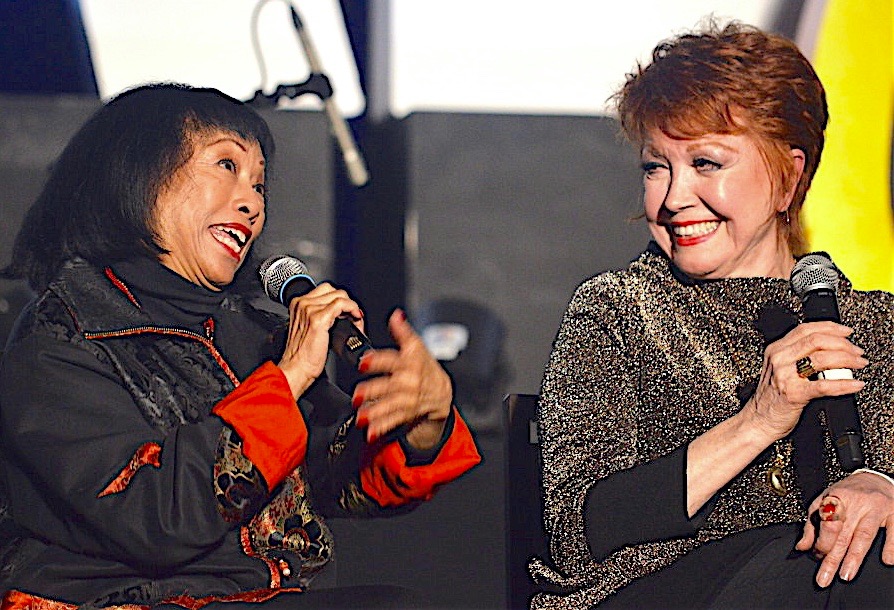 2020: New York celebrated its fifth BroadwayCon  during the weekend of Friday, January 24th through Sunday. January 26th.  This brought thousands of theatre fans from all over the country and beyond came to the Hilton Hotel on 6th Avenue and 53rd Street.  Many came in costumes, brilliantly created of characters from various shows.  There were the likes of “Beetlejuice”, Anna from “The King and I”, “Evita”, “Hello Dolly”, Frozen” “Newsies” “Waitress”, Little Mermaid” to name a few, it was overwhelming.

BroadwayCon had so much to offer and there was no way you can see it all.  There were seminars, fan groups, workshops, lectures, karaoke, podcasts, and photographs and autographs with with many of the Broadway stars. A marketplace where you could buy souvenirs, vintage posters, Playbills, items made for the convention, special posters, pins, jewelry and clothing.

Opening day had their annual “BroadwayCon First Look” a sneak preview of what Broadway has to offer this coming season. In the past I saw a presentation from “Anastasia” and “Come From Way”. Last year we saw “Tootsie”, “Moulin Rouge”, “Beetlejuice”, “Hadestown” and “Kiss Me Kate”  This year First look gave us a peak at, “Company”, “The Jagged Little Pill”, “Emojiland”, “Caroline or Change”. “Six”, “Mrs. Doubtfire”, “Sing Street”, and a few others.

There were two interviews with Broadway’s royalty. The first with Donna McKecknie and we learned a lot about her career, but most of it was about the creation of “A Chorus Line” which won her a Tony Award”. How it was created by the performers themselves by a tape recorder given to them to tell about their lives by Michael Bennett.  These tapes were listened to and used to create the various characters in the show.  It started as a workshop, then played at the Joseph Papp Theatre and moved on to Broadway.  Donna then brought out a surprised guest, a friend who was also in  “A Chorus Line” with her, Baaorke Lee.  Baaorke went on to direct and or choreograph more than 35 international productions and the Broadway revival in 2006.

The second interview was with Len Cariou.  Len had just come over after his 2:30 matinee performance on West 55th Street in “Harry Townsend’s Last Stand” and had to rush back after this for a 7:30  performance.  Len’s first musical on Broadway was “Applause” with Lauren Bacall.  He had met Harold Prince at a Gypsy performance and Hal thought he was great.  He sent a script to “A Little Night Music” sent to him. first without the songs and then after he like it with the songs. and asked Len if  he would like to do it and he did.  Some years later Len was working at the Guthrie Theatre and they needed a script to “Company”. He called Hal Prince for it and Hal sent it and told him that Stephen Sondheim was writing a show for him.  It was “Sweeney Todd” and Hal was directing.  He had never met Angela Lansbury and she was a gem to work with. Len won a Tony for “Sweeney”.  Some years later he was asked to guest on Angela Lansbury’s tv series “Murder, She Wrote”. He wound up doing nine more of these in a continuing role.

Following this there was “BroadwayCon Time Capusle 1990” with five performers who appeared on Broadway in 1990. On this was Greg Edelman (“City of Angels”), Bob Stillman (“Grand Hotel”), Mary Stout (“Me and My Girl” and “A Change in the Heir”), Doug Friedman (“the final cast of “A Chorus Line”) and Jay Obery James (“Cats’)  hosted by Jennifer Ashley Tepper.  Bob Stillman was written out of “Legs Diamond”) before in came to Broadway but he went to the closing night party  There he met Joey Parnes who set up an audition for “Grand Hotel” for the role of the Baron.  He was not right for that role but got the role of Erik the assistant concierge.   Mary Stout was in “Me and My Girl” at the Marquis Theatre which had to close on December 31st 1989 to make way for the upcoming “Annie 2” which never opened. She went into a new show at the Edison Theatre “A Change in the Heir” which closed after a month.

“BroadwayCon Cabaret” hosted by Ben Carmeron had a bunch of Broadway performers doing their dream roles or songs they loved from shows.  Teal Wicks, late of “Cher” sang “What Makes Me Love Him” from “The Apple Tree.” After she finished, Ben asked her to do a song from “Le Miserables” ala Cher which she did “On my Own”. Carmen Ruby Floyd said the role for her has not been written for her yet but would love to do “Hello Dolly” and sang “Before the Parade Passes By”. Alysha Umpress had appeared in “The Wizard of Oz” as a youngster in grade school sang “Somewhere Over the Rainbow.”  Alex Gibson sang “Be Prepared and Autumn Gilbert “Fly, Fly Away”.

Many of the Spot on Shows, had cast members, directors, choreographers, and writers of the shows talk and discuss their productions. These were fabulous,  The shows covered, “Moulin Rouge”, “Mrs. Doubtfire”, “Beetlejuice”, “Hadestown”, “Jagged Little Pill”, and “Six”.  We heard a lot of inside stories.

One of talkbacks “Getting the Word Out” with press agents, Susan L. Shulman, Joe Trentacosta, and Philip Carrubba.  The press agents are in charge of getting the word out, the cast changes, if a VIP visits the show, if someone gets hurt etc.  They are like doctors always on call.  Philip told of having his hands full when he was in charge of “Spiderman – Turn Off the Dark”.  This show which probably goes down in theatre history as having 182 previews and everyone wondering if it ever would happen.  There were cast members quitting all the, and many serious injuries happening constantly.  He had to keep the press away until it opened which was not an easy task.  Some bought their own tickets just to see it.   Susan told  us of David Merrick getting quotes from critics for “Subways Are For Sleeping” Knowing they would pan it. He went into the phone book to find people with the same name, invited them to the show, and got quotes from them and put an ad in the newspapers.

There was a Star to be Talent contest with 11 finalists chosen from hundreds of videos sent.  A young man named Luke Islam sang a song from “Bandstand”  “Love Will Come and Find Me” won.

The Marketplace had so much to offer. Brian Stokes Mitchel and Kerri Butler were signing their CDs at the Broadway Records table and Justin “Squigs” Robertson who had a table.  He is the artist and creator of The Lights of Broadway Show Cards” which are collector cards like the baseball cards of days gone by.  He even created a series just for BroadwayCon.