Donald Trump has only been President two weeks, but theater is already responding to his controversial (to put it mildly) regime. 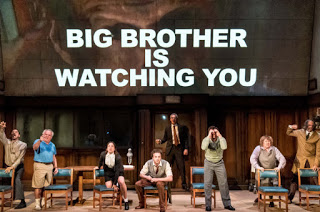 Donald Trump has only been President two weeks, but theater is already responding to his controversial (to put it mildly) regime. Many have compared Donald and his spokespeople Kellyanne Conway and Sean Spicer’s offering “Alternative facts” as truth to the doublespeak of the tyrannical dictator Big Brother in George Orwell’s classic dystopian novel 1984 which is enjoyed a resurgence lately (I wonder why.) A stage version of Orwell’s classic will be presented on Broadway in a limited production, opening on June 22 at the Hudson Theatre, now home to the also limited engagement of Sunday in the Park with George (more on that production and its decision to stay out of the Tony race in a future blog.) This British production of 1984, originally presented by the Headlong and Almeida will arrive with an American cast under the auspices of producers Sonia Freedman and Scott Rudin. A previous stage version played the Joyce Theater Off-Broadway in the 1990s as part of a regional American theater festival. There have been two movie adaptations. Edmond O’Brien, Jan Sterling and Michael Redgrave starred in the 1956 version and John Hurt (who just passed away) and Richard Burton headlined an even starker edition released in year of the title. With claims of fake news and imaginary terrorist attacks coming from the Trump administration, Orwell’s prophetic work is more relevant than ever.

Pulitzer Prize and Tony Award winning playwright Robert Schenkkan (The Kentucky Cycle, All the Way, Hacksaw Ridge) has written a more direct response to the Trumpian junta with Building the Wall, a new play set in near future. The playwright told the New York Times he churned out the script in a “white hot fury” over the course of a single week just prior to the election of 2016. It received a developmental reading at NYC’s Lark Theater shortly after its was finished and is now on the roster of four regional theaters. The first production will be at the Fountain Theatre in Los Angeles from March 18–May 21. The press release describes the play thus: “It’s the very near future, and the Trump administration has carried out his campaign promise to round up and detain millions of immigrants. Now, a writer interviews the supervisor of a private prison as he awaits sentencing for carrying out the federal policy that has escalated into the unimaginable. This riveting, harrowing and illuminating drama delivers a powerful warning and puts a human face on the inhuman, revealing how when personal accountability is denied, what seems inconceivable becomes inevitable.”

Other productions will be presented at the Curious Theatre in Denver (April 4-19), the Forum Theatre in Silver Spring, MD; the Borderlands Theatre in Tuscon, AZ; and the Adobe Rose Theatre, Santa Fe, NM. Hopefully, New York audiences will get to sample this relevant work.

Wallace Shawn’s Evening at the Talk House, opening Feb. 16 Off-Broadway in a New Group production at the Signature Theatre, also takes place in an alternative future. The plot concerns a group of theater artists reacting to a tyrannical leader in the White House. Lynn Nottage’s Sweat will transfer to Broadway in April after a hit run at the Public and is based on interviews with blue-collar workers displaced by the global economy.
Another Pulitzer Prize winner, Ayad Akhtar (Disgraced) tackles another aspect of the American system with Junk, a new play chronicling the financial civil war of the 1980s. It opens Oct. 12 at Lincoln Center’s Vivian Beaumont Theatre for a limited run. Business-centered plays usually don’t do well on Broadway. Lucy Prebble’s Enron and Caryl Churchill’s Serious Money both closed after only a week of performances, but Junk is a LCT non-profit (ironic, huh, since it’s about making money).

As usual, here is an updated rundown of upcoming Broadway and Off-Broadway openings for the remainder of the 2016-17 season and beyond:

Originally Posted on The David Desk 2 on February 8, 2017