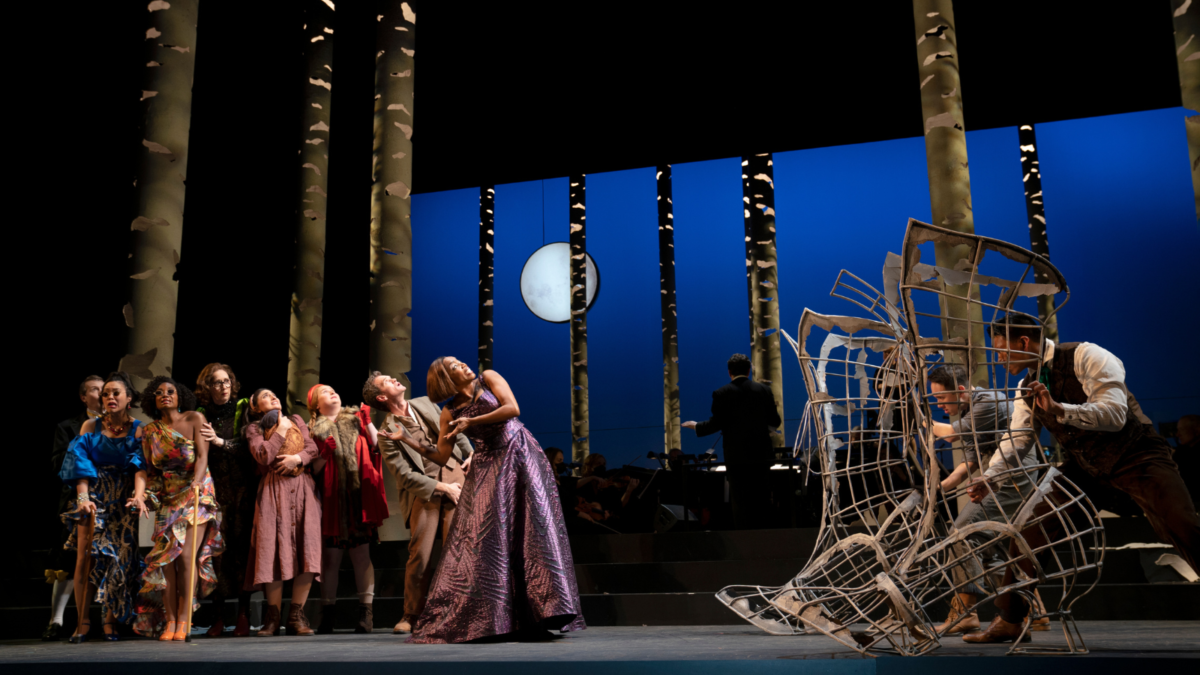 The Encores! staging of “Into the Woods” will transfer to Broadway. Credit: Joan Marcus

Sara Bareilles (Waitress) will reprise her role as the Baker’s Wife with Brian D’Arcy James (Something Rotten, Sweet Smell of Success) replacing Neil Patrick Harris as the Baker. Gavin Creel (Tony winner for Hello, Dolly!) will also return in the dual roles of the Wolf and Cinderella’s Prince. New cast members include Patina Miller (Tony winner for Pippin) as the Witch, Phillipa Soo (Hamilton, Ameila) as Cinderella, Joshua Henry (Carousel) as Rapunzel’s Prince, and Annie Golden (Assassins) as Cinderella’s Mother/ Grandmother/Giant’s Wife). Miller is replacing Heather Hedley who will be filming Netflix Sweet Magnolias series. Soo is taking over for Denee Benton who will be doing the second season of The Gilded Age. Ironically, Benton replaced Soo in Natasha, Pierre and the Great Comet of 1812 when it transferred from Off-Broadway to on.

This will be the third rendition of Woods on Broadway, following the original, and the 2002 revival. There were also revivals Off-Broadway from the Fiasco at the Laura Pels and in Central Park’s Delacorte Theater.

Outer Critics Ceremony: For the first time in three years, the Outer Critics Circle gave out their awards for the best of the Broadway and Off-Broadway season in a live ceremony. The OCC which includes critics and journalists for out-of-town and national publications and media, gives separate awards for Broadway and Off-Broadway in the categories of Best Play and Musical and considers on and off equally in all other categories. When the pandemic struck in 2020, the Circle announced their winners via press release. Prior to that, the OCC awards have normally been presented in an afternoon ceremony at Sardi’s with only the winners, who have been traditionally announced beforehand, and OCC members attending with a dinner. This year because of COVID concerns, the event was held at the intimate Bruno Walter Auditorium at Lincoln Center Public Library for the Performing Arts on Thursday May 26. Presenters included Andre de Shields (entering his last week of performances in Hadestown and preparing for Death of a Salesman), Beth Leavel (in rehearsal for the Chicago pre-Broadway run of The Devil Wears Prada), and Brittney Johnson (currently in Wicked). OCC president David Gordon of Theatermania.com welcomed everyone and expressed his joy at being back in the theater after such a long hiatus.

Best Actor in a Musical Jacquel Spivey (A Strange Loop) explained why he was elated to receive his award from Andre de Shields. When he was growing up in a small town in North Carolina, the only way he could see Broadway shows was on YouTube or bootleg videotapes. Two of his favorites were The Wiz and Ain’t Misbehavin’, both starring De Shields in the original cast. Special Award winner Ruben Santiago-Hudson (Lackawanna Blues) gave an impassioned acceptance speech, emphasizing the importance of representation for the BiPOC community in theater. Producer Caro Newling accepted all six OCC awards for The Lehman Trilogy since the mammoth show had finished its Broadway run and all the recipients were in London. (Award pianist Michael Lavine cleverly played “The Money Song” from Cabaret as she got to the stage.) Newling delivered a fascinating account of Lehman’s journey from Milan to London to Off-Broadway to Broadway with interruptions for the pandemic. The most interesting anecdote was how Best Actor in a Play winner Simon Russell Beale came to play so many roles and the cast was reduced to only three. Beale who always showed up at rehearsals one hour early, read several of the roles in the new streamlined version of the script which was originally seven hours long. “You know, I could do all these,” he said to director Sam Mendes who agreed.

David Morse and Mary-Louise Parker paid tribute to their castmate Johanna Day who was sharing in a special citation for recreating their roles from the original production of Paula Vogel’s How I Learned to Drive.

It was heartwarming to return to this intimate celebration of theater. Also attending were winners Patti LuPone and Matt Doyle of Company, LaChanze of Trouble in Mind, Victoria Clark of Kimberly Akimbo, Jesse Tyler Ferguson of Take Me Out, Uzo Aduba of Clyde’s, Kristina Wong of Kristina Wong Sweatshop Overlord and playwright Sanaz Toossi, winner of the John Gassner Award for English. The award season continues on June 12 with the Tonys and for the first time, the Drama Desks will take place after the Tonys on June 14 at Sardi’s. This year, the DDs will announce their winners beforehand (like the OCC) and there will be a small ceremony at the celebrated theater restaurant.

Where the Mountain Meets the Sea (MTC/City Center Stage I)

Future–Leopoldstadt; The Karate Kid; Back to the Future; Our Town; The Nanny; The Normal Heart/The Destiny of Me; Smash; Soul Train; The Who’s Tommy