December 20, 2021: While Broadway is in turmoil over multiple performance cancellations and uncertainty due to the rapid spread of the omicron variant of the COVID-19 virus, a new production has been announced for the spring–The Little Prince, a stage version of the classic 1943 novella by Antoine de Saint-Exupery about the titular boy royal who seeks companionship on a journey to many different planets. Described as a theatrical experience with musical elements, the show combines elements of acrobatics, circus arts, dance, and video. It is the creation of director-choreographer Annie Tournie and has had runs in Paris, Sydney and Dubai. 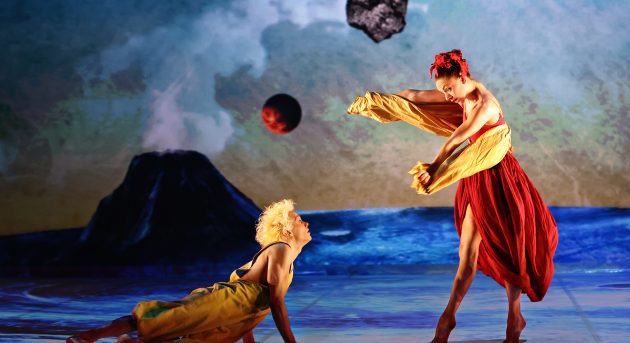 December 20, 2021: While Broadway is in turmoil over multiple performance cancellations and uncertainty due to the rapid spread of the omicron variant of the COVID-19 virus, a new production has been announced for the spring–The Little Prince, a stage version of the classic 1943 novella by Antoine de Saint-Exupery about the titular boy royal who seeks companionship on a journey to many different planets. Described as a theatrical experience with musical elements, the show combines elements of acrobatics, circus arts, dance, and video. It is the creation of director-choreographer Annie Tournie and has had runs in Paris, Sydney and Dubai.

Previews begin March 4 at the Broadway Theater with an opening set for March 17 for a run through Aug. 14. The show features a libretto by co-director Chris Mourin who also plays the narrator, and music by Terry Truck. It’s not clear if this presentation is a traditional musical, a play with music, and a sort of Cirque du Soleil show. A spokesperson stated it would be up to the Tony Eligibility Committee to determine its status for awards consideration. For our purposes, I have listed it as a new musical under the list of productions for the 2021-22 Broadway season. After seeing it, I might shift it to Special Presentations.

Director Tournié said, “We are thrilled for our company to continue The Little Prince’s world journey to the bright lights of Broadway and New York. On his journey, the Little Prince shares a message of humanity with the many different people and cultures he encounters. We are humbled to bring his story of friendship, loneliness, love, and caring for others and our planet back to the melting pot where Antoine de Saint-Exupéry first created this beloved tale.”

Another adaptation appeared on Broadway in 1982 under the title of The Little Prince and the Aviator. Starring Anthony Rapp and Michael York in the title roles, this version closed during previews and never officially opened. A 1974 film version was directed by Stanley Donen (Singin’ in the Rain, It’s Always Fair Weather and a dozen other screen classics) and featured a score by Alan Jay Lerner and Frederick Loewe and an impressive cast including Bob Fosse, Gene Wilder, Richard Kiley, Clive Revill, Joss Ackland, and Donna McKechnie. This was the first new project Lerner and Loewe had collaborated on since Camelot. With a pedigree like that, you’d think the film would have been a classic, but it faded into obscurity soon after the opening.

It’s heartening to hear of a new, unexpected Broadway production, especially amid the high number of shows canceling performances due to positive COVID tests. Ten productions have eliminated performances including Ain’t Too Proud, Aladdin, Freestyle Love Supreme, Hamilton, Harry Potter and the Cursed Child, Jagged Little Pill, Little Shop of Horrors (Off-Broadway), Moulin Rogue, Mrs. Doubtfire, MJ: The Michael Jackson Musical, and Tina. Company had to scrap a performance due to a non-COVID illness in the cast (Claybourne Elder who plays Andy, tweeted he had been thrown up on at the start of a performance.) MJ is going on the longest hiatus and will begin new performances on Dec. 27. In the most extreme move, Radio City has shuttered the rest of its Rockettes Christmas Spectacular which had several performances a day through Jan. 2.

In another drastic development, the Public Theater is now requiring its patrons to show proof of a negative COVID test within 24 hours of the date of the performance in addition to a photo ID and evidence of full vaccination. This new protocol will be in place until Jan. 30. Will Broadway adopt this extra layer of precaution?

There have been some panicky posts on social media foretelling the doom of live theatre in New York, but most of these shows have resumed performances or have announced their return. However, this uncertain state could spell trouble at the box office with audiences jittery over attending if performances are cancelled at the last minute. With omicron spreading rapidly, there could be more closures in the future.

In other news: the revival of Macbeth starring Daniel Craig and Ruth Negga, previously announced for the Lyceum has switched to the more desirable Longacre which became available once Diana posted a closing notice for Dec. 19. That left the Lyceum vacant and it was snapped up in a hurry by the Pulitzer Prize-winning A Strange Loop from the Washington DC-based Woolly Mammoth Theater. Loop is the autobiographical portrait of a gay, African-American theater writer dealing with his community’s homophobia and his own self-acceptance. Michael R. Jackson’s musical had a limited run at Playwrights Horizons in 2019 and won the Pulitzer Prize as well as the Drama Desk and New York Drama Critics Circle Awards for the 2019-20 season. The Woolly Mammoth run has been extended to Jan. 9, 2022. The NYC transfer will open sometime in the spring of 2022. Specific dates and casting will be announced soon. The question is will it be considered a new musical or a revival by the Tony eligibility committee? I will list it as a revival for the moment (see below).