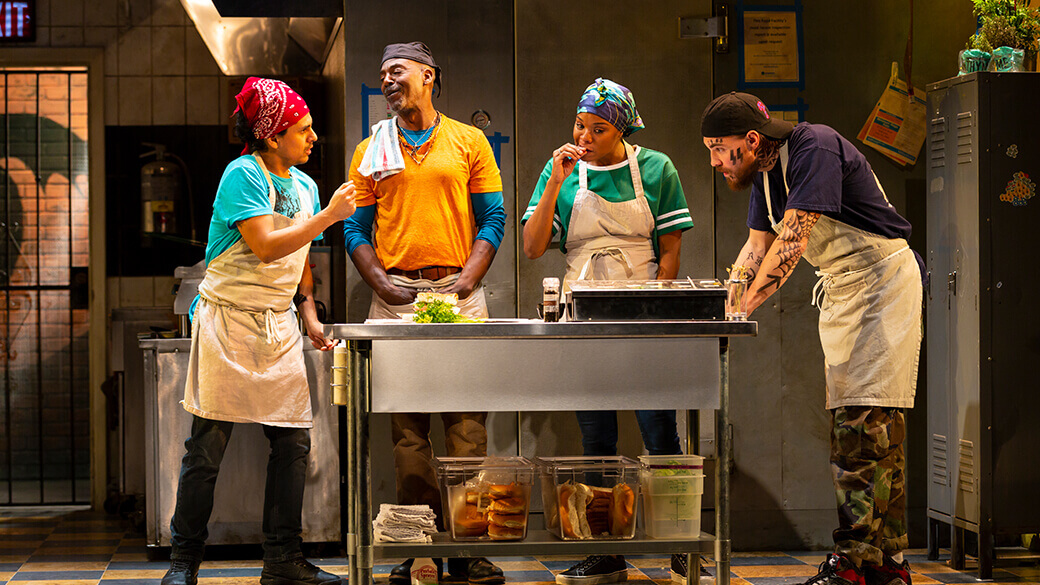 Nevertheless, more announcements of Broadway productions for spring and fall 2021 are being made. Second Stage has set next autumn for the vague opening of a new, unnamed play by two-time Pulitzer Prize winner Lynn Nottage to start performances at the Helen Hayes Theater. The press release described the work as “a stirring new play” in which “a truck stop sandwich shop offers its formerly incarcerated kitchen staff a shot at reclaiming their lives. Even as the shop’s callous owner tries to keep them under her thumb, the staff members are given purpose and permission to dream by the enigmatic, zen-like chef and his belief in the possibility of the perfect sandwich.” This sounds exactly like Nottage’s play FLOYD’S (the name of the female owner of the shop) which premiered at Minneapolis’ Guthrie Theater in August 2019. Why the name change and what will the new name be? Perhaps the switch is because the producers want to avoid confusion with George Floyd, the African-American man who was killed by a white Minneapolis police officer kneeling on his neck. Floyd’s death sparked nationwide protests against police brutality and systemic racism.

If theaters open on schedule, Nottage will have three productions running simultaneously. An operatic version of her Intimate Apparel is set for Lincoln Center’s Off-Broadway Mitzi Newhouse in the fall and MJ: The Michael Jackson Musical for which she wrote the book is supposed to open on Broadway at the Neil Simon in April.

Second Stage also announced Rajiv Joseph’s Letters from Suresh will play its Off-Broadway Tony Kiser Theater in the Spring of 2021. A companion piece to the playwright’s Animals Out of Paper, the play focuses on a series on interconnected letters between strangers, friends, lovers, and daughters seeking connection. The two Second Stage productions joined the previously announced revival of Take Me Out, set to open at the Hayes on April 22.

In other news, Rosie O’Donnell has coyly suggested she will be playing the star’s mother in a revival of Funny Girl once theaters open. She hinted at the news during a recent appearance on the web talk show, Stars in the House. There are rumors that the lead role of Fanny Brice will be played by either Lady Gaga or Idina Menzel. The production will supposedly be based on Michael Mayer’s 2015 staging for London’s Menier Chocolate Factory. In 2011, plans were set for a revival to star Lauren Ambrose, but major investors pulled out and the project was scrapped. This will be the first Broadway revival of the bio-musical which made a star of Barbra Streisand in 1964. O’Donnell has previously appeared on Broadway in revivals of Grease and Fiddler on the Roof. She hosted the Tony Awards in 1997, 1998 and 2000, and promoted Broadway extensively on her daytime talk show which ran from 1996 to 2002.

Off-Broadway, Playwrights Horizons has announced its slate for 2021 but with no specific dates. New artistic director Adam Greenfield is committing to highlight works by artists of color. The four-play schedule (down from six the previous season) includes Alesha Harris’ What to Send Up When It Goes Down, about Black lives lost to racist violence; Sylvia Khoury’s Selling Kabul, a thriller set in Afghanistan; Dave Harris’ Tambo and Bones, concerning two characters trapped in a minstrel show; and Sanaz Toossi’s Wish You Were Here, set during the Iran Revolution.

…what the end will be (Roundabout/Laura Pels)

Exception to the Rule (Roundabout/Steinberg Center)

What to Send Up When It Goes Down (Playwrights Horizons)

Wish You Were Here (Playwrights Horizons)

Future–Death of a Salesman; Funny Girl; K-pop the Broadway Musical; The Nanny; The Normal Heart/The Destiny of Me; Smash; Some Like It Hot; Soul Train; The Who’s Tommy

Unopened Productions from 2019-20 with no new dates yet

Girl from the North Country

Phantom of the Opera