January 12, 2020: Will the Once lightning strike twice? Sing Street, the musical based on the 2016 movie, will transfer to Broadway from its run at New York Theater Workshop. 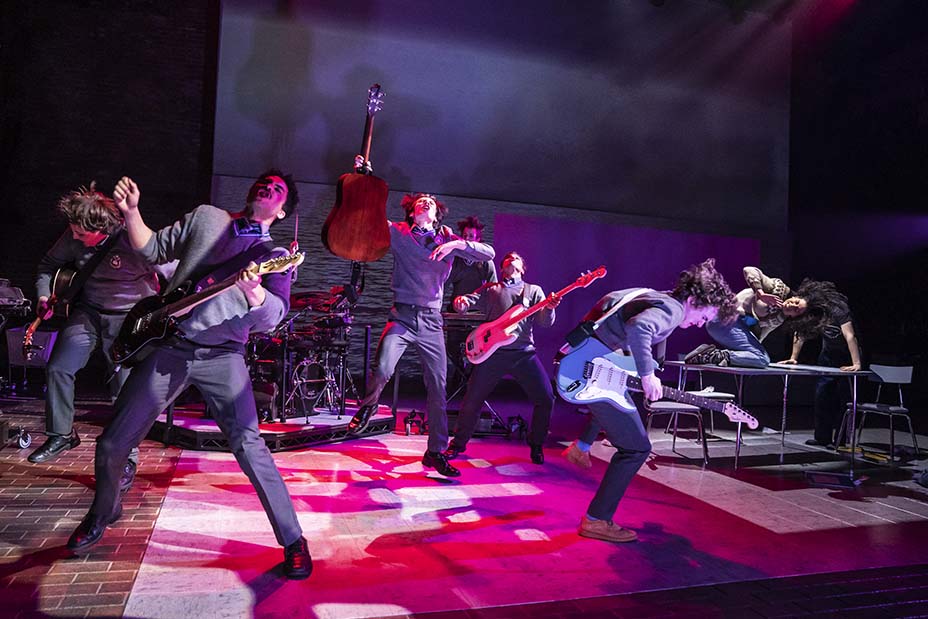 A scene from “Sing Street”

January 12, 2020: Will the Once lightning strike twice? Sing Street, the musical based on the 2016 movie, will transfer to Broadway from its run at New York Theater Workshop. Many of the creative personnel including John Carney who wrote and directed the original film and book writer Enda Walsh also worked on Once which moved from its Off-Broadway perch at NYTW to the Main Stem, winning 8 Tony Awards including Best Musical. The general topic of both shows is similar: economically desperate Irish folk finding release and joy in music. Sing Street did not receive universal acclaim so the move is a risky one. The Broadway musical field is somewhat crowded this year and Street will face competition for awards and box office dollars from Tina, Six, Jagged Little Pill, Moulin Rouge, Diana, Mrs. Doubtfire, Flying Over Sunset, The Girl from the North Country and Lightning Thief: The Percy Jackson Musical (though that last young-adult one probably won’t receive much Tony love.) No show has emerged as the favorite to take the top Tony Award. Despite criticism from cramming in every social issue known to man from opioid addiction to global warming, Pill is probably the front runner right now to be the big winner on Tony night with the two-part, gay-history play The Inheritance as the favorite for Best Play. Sing Street begins previews at the Lyceum March 26 with an opening set for April 19.

We’ve had musicals based on movies, plays, songbooks, music legends’ biographies, even comic strips (Li’l Abner, Annie, You’re a Good Man, Charlie Brown, Doonesbury) but few derived from TV shows–Spongebob Squarepants and The Addams Family are the only two that come to mind. There was talk of one based on The Apprentice. Thank God we’ve been spared that. Now another long-running series will serve as the basis of a Broadway tuner. The Nanny (1993-9), the long-running series about a nasal-voiced care provider working for a British-accented theatrical producer, is being developed for the stage by its creator and star Fran Drescher, and another sitcom star-creator, Rachel Bloom of Crazy Ex-Girl Friend. Drescher will collaborate on the book with her former husband Peter Marc Jacobson who co-created the series with her and Bloom will co-write the score with Adam Schlesinger. (Sidenote: Drescher and Jacobson divorced during the run of the series and later Jacobson came out as gay. Naturally, they made a TV show out of that situation–Happily Divorced–which ran on TVLand for two seasons.) Marc Bruni (Beautiful: The Carole King Musical) will direct. There’s a lot of potential here with musical sequences from whatever show Fran’s employer Maxwell Sheffield is working on, kvetching from Fran’s mother Sylvia and grandmother Yetta, and comedy numbers for the butler Niles snipping at CC, Maxwell’s catty business partner. Daniel Davis who displayed perfect timing and dry wit as Niles was the best thing about the series whenever I watched it. No dates or casting have been announced.

In other news, Ivo van Hove’s controversial revival of West Side Story, currently in previews, has delayed its opening from Feb. 6 to Feb. 20, due to a knee injury suffered by leading man Isaac Powell. His understudy has taken over until he recovers. A second injury occurred recently and it won’t cause a further delay in the opening, but the actor involved–Ben Cook who plays the Jets leader Riff–will not be returning to the show. He’ll be replaced by Dharon E. Jones.

Here’s an updated list of Broadway and Off-Broadway openings. New entries include Transport Group’s revival of The Unsinkable Molly Brown, the first NY restaging of this Meredith Willson tuner, and 72 Miles to Go, a new drama by Juilliard playwright Hilary Bettis at Roundabout’s Laura Pels Theater, about a family split apart by deportation.

Feb. 24–All the Natalie Portmans (MCC)

Vineyard Theater–Tuvalu or The Saddest Song

May 15–A Boy’s Company Presents: “Tell Me If I’m Hurting You” (Playwrights Horizons)

The Inheritance, Parts One and Two

Kristin Chenoweth: For the Girls