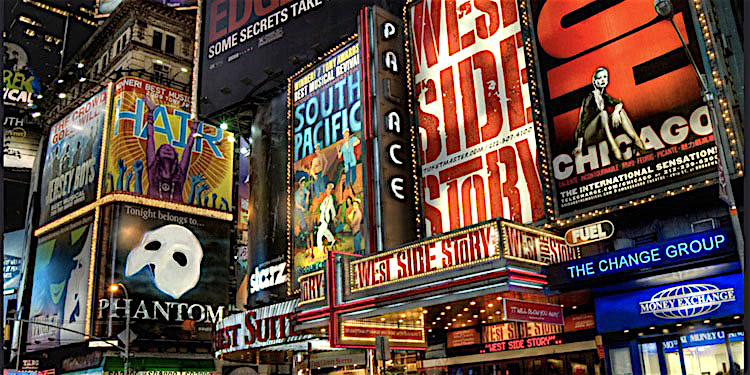 Broadway League President, Charlotte St. Martin, said it will take producers at least 3 to 4 months to mount a production. No individual shows have announced returning yet, but Martin indicated longer running shows can probably be ready first. According to the New York Times, Hamilton, The Lion King and Wicked will announce jointly next week, followed by Chicago, Aladdin, Come From Away, American Utopia, and others.

Shows can open on May 19 at a reduced capacity. There have already been a few socially distanced openings popping up around the city, but as St. Martin pointed out Broadway cannot function, profitably, at much less than 100%.

Off Broadway, Daryl Roth was the first major producer to mount a show, Blindness, an acclaimed Donmar Warehouse production with no actors, which opened on April 23 at the DR2 in Union Square. Attendance is capped at a mandated 33%, with only 86 people in attendance, seated in pods six feet apart. Tickets are sold in advance, online or by phone (212-269-6200) or visit:  www.BlindnessEvent.com

Tennessee Rising, a solo play directed by Alan Cumming opened at The Cell on 23rd Street in Chelsea. The play, written and performed by Jacob Storms, was originally scheduled to open in New Orleans last year, but was canceled due to covid 19. The gifted Mr. Storms sounds very much like a young Tennessee Williams capturing his Southern drawl and cadences beautifully.  Tennessee Rising chronicles Willams’ formative years and runs Sundays April 11, 25, May 9 & 23 at 6pm and Sundays, June 6-27 at 7pm. Patrons are required to follow all city-mandated covid-19 precautions, including mandatory mask wearing and capacity is limited to 18.
For tickets: https://web.ovationtix.com/trs/pr/1043729

In Greenwich Village Voyeur, a live, open air, immersive Theatrical Experience, reopened on March 26 for an intimate audience of only 8. The sidewalks, doorways and windows of Greenwich Village become the setting for the walking show. Voyeur celebrated its 250 performance on April 23 and tickets are currently on sale through May 29.  Visit www.unmakinglautrecplay.com for times, tickets and further details.