American Psycho ****
Benjamin Walker has no qualms when it comes to choosing avant-garde, edgy work with which to showcase his deeply resonant voice. He displayed his penchant for dark humor in the critically lauded Bloody Bloody Andrew Jackson, and once again walks a finely entertaining line in American Psycho (this is not to mention his film work, such as Abraham Lincoln: Vampire Hunter). Anyone in their right mind would question the idea of the shear existence ofa musical based on the 1991 novel by Bret Easton Ellis and the 2000 film starring Christian Bale. One would most likely expect the show to be hokey, as is the case with much of the violence created for the stage. (Did anyone stay long enough to catch that last scene in Mamet’s China Doll? Who didn’t laugh at the “brutal” bashing of Bruce Willis’ feet in Misery?)However, the musical has been fashioned with such edgy, charismatic genius that it is no wonder Walker saw its potential. That being said, his casting as the enigmatic Patrick Bateman, a rich member of the social elite in the 1980s, is fantastic perfection…even when splattering blood.

Walker’s serial killer and abuser of women is somewhat jocular without being offensive. His sly smile and charming wink (not to mention a killer physique- he spends much of the show in his underwear) would make any man or woman squirm excitedly. Sparring partner Drew Moerlein as Paul Owen is a fantastic addition to the Broadway stage, as can be seen in his almost inhuman tricks in the number “Cards.” The most notable standouts in American Psycho are Helene Yorke and Theo Stockman, Bateman’s self-obsessed girlfriend and flamboyant, snooty friend, respectively. Both are riveting in their portrayals of vulgar, privileged elite, and will explode when given lead roles down the line. The major misstep in American Psycho is the use of Jennifer Damiano and stage veteran Alice Ripley. Damiano is barely audible in her wasteful scenes as Bateman’s mousey secretary, and her old Next to Normal cast mate might be missed if you’re not careful to look for Ripley in her minute roles as “Mrs. Bateman and others.”

Duncan Sheik (Spring Awakening)wrote an intricately intelligent score that underlines the satire pervading Roberto Aguirre-Sacasa’s book. The songs are not exactly deep, per se (see titles such as “Selling Out” and “You Are What You Wear,” for example), but they aid in setting an existential piece that asks its audiences to realize their own selfishness, while steering them toward a cognizance of being above it. A character in its own right, Katrina Lindsay’s costumes are startlingly modern and cutting in all of their 80s glory. Lynn Page’s choreography is equally thrilling in its jerkiness and sharp moves. Coupled with the sensational video design of Finn Ross and a hyperreal set of blues and whites from Es Devlin, you get an absolutely innovative piece of theater. 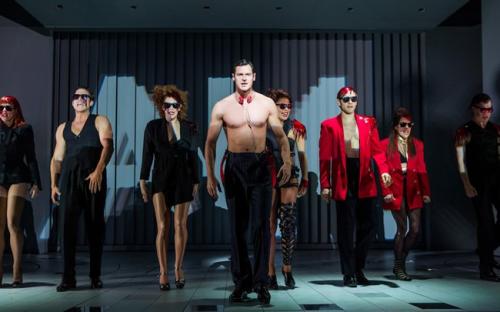 Fully Committed ****
It would be next to impossible not to fully commit to this fun treasure of a play. Jesse Tyler Ferguson takes on Becky Mode’s gift to the comedic actor, a snapshot of a booking agent on the reservations desk at the most exclusive Manhattan restaurant. Ferguson takes on over forty characters, flitting seamlessly between a self-absorbed chef, a diva for a maître d’ and the centralized character of Sam, an aspiring actor trying to make it in an unforgiving city.

It would be easy for the piece to be get lost in the freneticism that ensues as Ferguson tells the story through so many voices; luckily, he is also telling it through the relatable lens of Sam, of whom the audience gets to witness many different layers- a hard feat, considering the play is ninety minutes and only features the one actor. Sam shares a nook in the basement of the restaurant with the plumbing system, and Derek McLane’s set chock full of crisscrossing pipes and an elliptical vision of rising chairs cleverly winks at the insanity pervading his hectic life. Jason Moore’s direction of Sam’s subtle arc is intelligent and meaningful, adding depth to a show that is as funny and timely as it is expressive. Though the story has been updated and changed since its 1999 off-Broadway debut, it is not overtly original; however, it’s telling is joyful, and Jesse Tyler Ferguson’s delivery is a master class in acting and physical comedy. 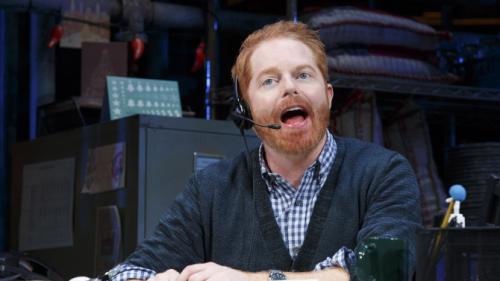 Waitress ****1/2
Each and every morsel of Waitress is delicious: there is book writer Jessie Nelson’s intelligent and funny character development; the delightful charm of Jessie Mueller’s unique voice and genuinely compassionate spirit; Sara Bareilles’ especially poignant score; and the diverse casting that features performers of every shape, size, and color, aside from a multitude of other delectable motives that might inspire one to indulge in this piece.

Some might say that Waitress is a tall order. After all, it is a love story (based on Adrienne Shelly’s 2007 independent film of the same name) amid a story of friendship, sexual re-awakening, spousal abuse, and finding oneself. Add in humor, music, and all of the bells and whistles that make a big-budget Broadway musical successful and you have a recipe that could have burnt this decadent treat to a crisp. However, under the phenomenal direction of Diane Paulus, it turns out that all aspects of the musical were planned with a variety of tastes in mind.

Waitress stands apart from other shows not simply because it’s the first Broadway musical to have an entirely female creative team. Its mesmerizing dialogue (Mueller’s Jenna writes to her unborn child, “I hope you become addicted…to having to matter to someone), a brilliant supporting cast (Keala Settle, Kimiko Glenn, Christopher Fitzgerald) bursting at the seams with heart, and a score that features stand-alone songs- a rare feat these days- are a few of the show’s many high points. “She Used to Be Mine,” the most intoxicating 11 o’clock number to grace the stage in years, is one not to be missed. 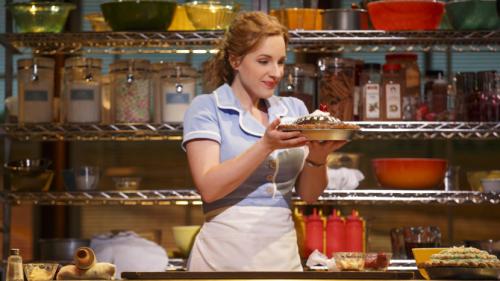 The Father ***1/2
There is no comfortable method in which one can watch an actor explore the many facets of dementia; however, challenging oneself to be uneasy while appreciating the honesty and artistry involved in such an experience is what makes The Father special.

Frank Langella plays the everyman “father,” who struggles to come to terms with the fact that he is losing his memory. His audience struggles along with him, watching as set pieces slowly disappear and his thoughts blur. Flashing strobe lights act as scene breaks, perhaps in an effort to demonstrate the speed with which the firing synapses of his brain are deteriorating. Right up to the point at which Langella’s Arthur is forced to relearn his name, audiences are hooked on the sad, yet poignant story. Kathryn Erbe’s performance is sympathetic yet frustrated, and is also a must-see. 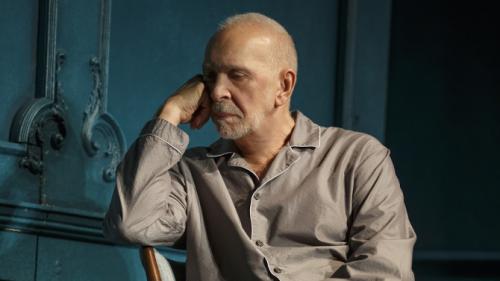 Tuck Everlasting ***1/2
Though Chris Miller and Nathan Tysen’s music and lyrics are not memorable in the slightest, Tuck Everlasting is a surprisingly beautiful theatrical experience. Based on the classic novel by Natalie Babbitt, the story centers around a precocious eleven year old girl (Sarah Charles Lewis, who makes her Broadway debut here), who lives with her widowed mother (Valerie Wright) and grandmother (Pippa Pearthree) in New Hampshire at the turn of the 20th century. She runs away from home in an effort to have more freedom, and in doing so meets Jesse Tuck (Andrew Keenan-Bolger) and his family living deep in her own family’s woods. She comes to learn about how the Tucks defied time through accidentally sipping water from a magical spring. The family has been immortal ever since.

Although it first seems to be a difficult plot to unravel on a stage, it later becomes equally magical and believable through Casey Nicholaw’s inspired direction. Walt Spangler’s scenic design is fanciful in its childlike sprawling ribbon of a tree and its branches. The Tucks’ home is also a treasure trove of eye candy, and will delight hardcore fans of the novel. Terrence Mann’s Man in the Yellow Suit is as evil as he is deliciously zany, and brings much of the story to life. His performance, along with that of the ensemble, in “At the Fair” is an Act One finale tailor-made for families. Despite a few too many slow ballads, book writers Claudia Shear and Tim Federle found stunning ways to make the novel work as a stage production (even making cuts in especially smart places); with Nicholaw’s stunning choreography in the climactic second act dance number, it is no longer a question as to whether or not this is an “everlasting” piece of theater. 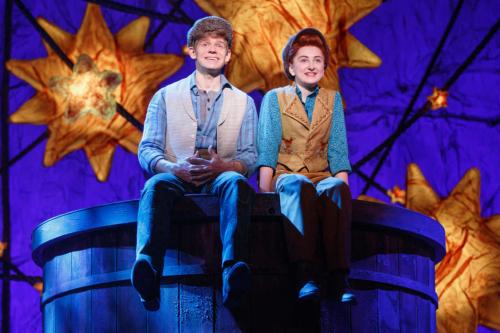 Arthur Miller’s The Crucible **1/2
Classicists will be tempted to take in Arthur Miller’s The Crucible, a dark, chilling interpretation of the favored piece. This season Broadway seems to have been having a love affair with Miller and Ivo van Hove, the acclaimed Belgian director, who was also at the helm of Arthur Miller’s A View From the Bridge. Upon experiencing The Crucible, it’s questionable as to why there has been such a resurgence of his work. The Walter Kerr stage is ominous and too large for the piece. The size of the space actually distracts from the dialogue. Tom Gibbons’ sound design also acts as a disturbance, often blatantly telling the audience how it’s supposed to feel, rather than simply setting the tone.

Tavi Gevinson gives an unforgettable performance as Mary Warren, complete with tears of confusion, rage and betrayal. Her emotions are so fierce that audiences can actually feel the water pouring from her face. However, despite a number of nominations for other actors, nothing about their performances was striking, most noticeably with Saoirse Ronan (making her Broadway debut). The use of a Tumaskan, a new, rare breed of dog, to enact a haunting scene in which audiences are meant to believe they are catching a contemplative wolf at its finest, is the most intriguing moment in the play. Despite interesting artistic choices, such as the use of a chalkboard and a display of the metaphysical in a climactic scene, the piece altogether drags its feet. 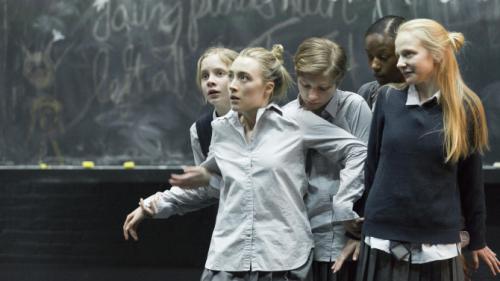