There’s been a flock of new Broadway announcements lately. The smash hit National Theater revival of Tony Kushner’s two-part epic Angels in America will be winging its way from London to New York and the long-gestating stage adaptation of the beloved classic To Kill a Mockingbird has confirmed an opening date. 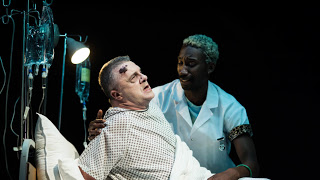 There’s been a flock of new Broadway announcements lately. The smash hit National Theater revival of Tony Kushner’s two-part epic Angels in America will be winging its way from London to New York and the long-gestating stage adaptation of the beloved classic To Kill a Mockingbird has confirmed an opening date. Angels will begin performances Feb. 23, 2018 at the Neil Simon Theatre prior to a March 21 opening night. Most of the London cast including Nathan Lane and Andrew Garfield will be repeating their performances which were seen in cinemas worldwide as part of the NT Live series. The only cast member not to make the trek will be Russell Tovey (whose bare chest caused an audience member to swoon during A View from the Bridge). Denise Gough will repeat her performance as the delusional Harper Pitt, but first she will repeat her Olivier Award-winning turn as an alcoholic, drug-addicted actress in People, Places and Things at St. Ann’s Warehouse. Speaking of Harpers, the stage version of Harper Lee’s classic novel To Kill a Mockingbird to be adapted by The West Wing’s Aaron Sorkin was first announced months ago. Producer Scott Rudin took out a two-page ad in the New York Times announced the show will open on Dec. 18, 2018. I picked up a copy of the print edition of the Times recently (I hadn’t looked at it in ages) and I was astonished at how few ads there were in the theater section. Tony winner Bartlett Sher (South Pacific, Golden Boy) will direct.

In other news, Bernadette Peters will be the new Dolly when Bette Midler leaves the hit revival next January and Victor Garber will take over for David Hyde-Pierce as Horace Vandergelder with an opening night set for Feb. 22. It’s rare that replacements get their own separate opening night, usually because the producers are confident the new reviews will bring in new audiences….Mean Girls has also set an official opening date of April 8 (previews begin March 12) at the August Wilson Theatre following a run at Washington DC’s National Theatre. Below is a calendar of the 2017-18 Broadway and Off-Broadway season and beyond since there are so many firm dates for 2018-19 now.

Sept. 13–To Peter Pan on Her 70th Birthday (Playwrights Horizons/Mainstage)

Spring 2018–The Flamingo Kid, The Boys in the Band

Dec. 18–To Kill a Mockingbird