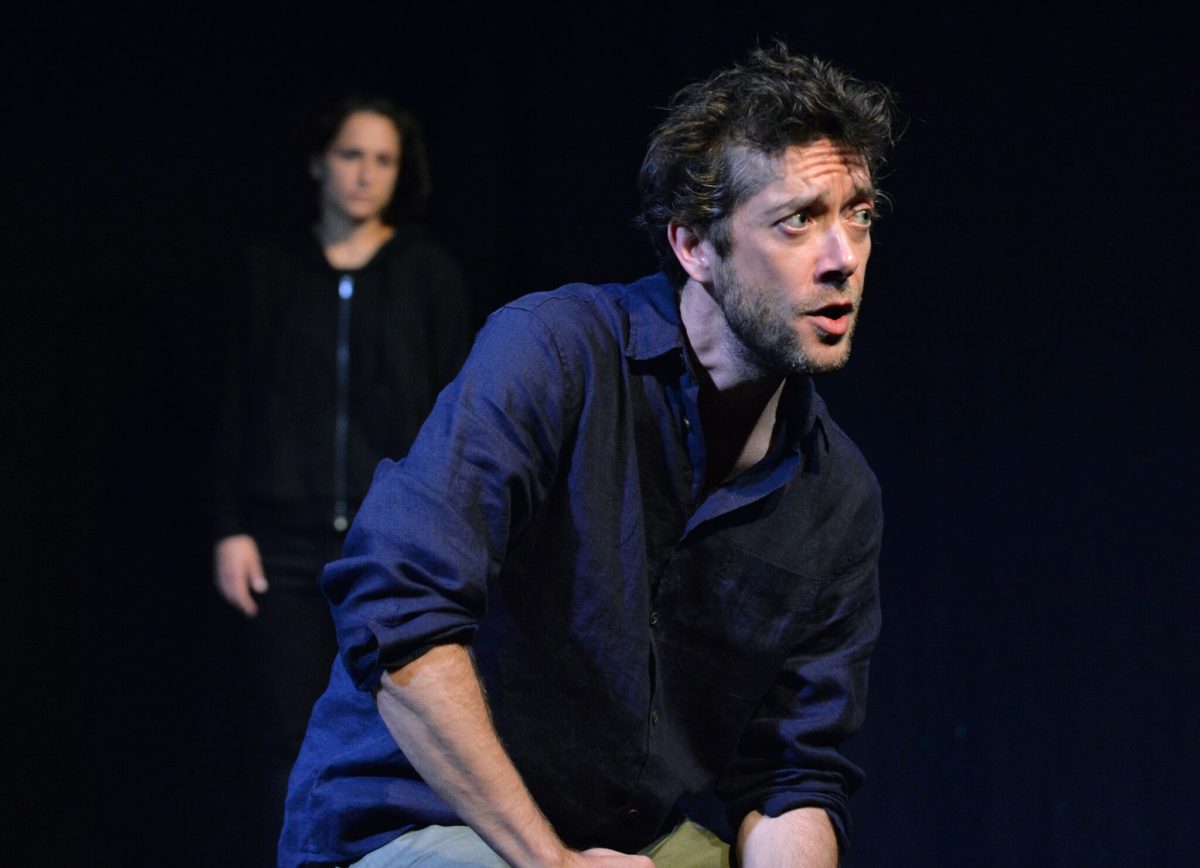 This inspired him to write a trilogy of tightly focused short plays called Arabian Nightmares based on the complex issues of Western interaction with the Middle East. With Borders the series becomes a tetralogy. Its first two parts, Echoes and Angels, were seen at 59E59 Theaters, respectively, in 2016 and 2017. The former, in fact, returned to share the 2017 bill, although with a different pair of actresses. Only The Collector (not to be confused with Mark Healy’s adaptation of the John Fowles novel) has yet to be seen locally.

Echoes, focusing on Syria, not Afghanistan, compared the effects of patriarchal suppression on women, one a 19th-century Englishwoman during the heyday of British imperialism, the other a burqa-wearing Syrian in jihadist Syria. Angel, a one-woman piece, handled the exploits of a badass, anti-ISIS, Kurdish fighter in Northern Syria. It starred Avital Lvova, the Russian-born, Berlin-raised, British-accented, thespian hand grenade who plays one of the two characters in Borders.

As in the earlier plays, each of which, like Borders, was acclaimed at the Edinburgh Fringe and then toured internationally, Borders, which runs 70 minutes, requires only the simplest theatrical means for its production. In fact, my description of Echoes needs only minor changes (noted in bold) to describe exactly what Borders does:

Naylor’s interestingly topical, if overly schematic, 70-minute play presents two characters’ thematically similar stories, side by side. Each is a monologue delivered straight to the audience, interrupted only when the other person speaks. The monologues incorporate whatever dialogue the stories require. Bleak as the stories are, Naylor has a way with words, and provides enough laughs to keep the piece afloat. Only for a fleeting second at the end do the characters connect.

The characters are British photojournalist Simon Nightingale (Graham O’Mara) and a young Christian, Syrian artist, who—because she’s desperate to hold on to her name, the one thing no one can take from her—calls herself Nameless (Lvova). With only a black brick wall behind them, two imaginatively deployed leather-seated stools, and a sensitive lighting scheme, O’Mara and Lvova bring their characters to life with exceptional vocal and physical skills.

Naylor’s script, written in breathless, staccato, pulp fiction-style sentences filled with vividly carved verbal images, begins in 1998. Simon is an ambitious but broke young photographer failing to earn a living at his idealistic goal of visiting the world’s hotspots shooting pictures of the human struggle for survival. At the same time, Nameless is a budding six-year-old artist in Homs, Syria, whose anti-Assad father is captured and slain by jihadists.

Soon, Simon gets a chance through a famous war correspondent he meets to photograph the as yet little-known Osama Bin Laden. Then 9/11 happens and, because of his Bin Laden experience, rare among photojournalists, Simon becomes increasingly famous, in demand, and well-paid as a celebrity photographer (lots of name dropping here), becoming a celeb himself as he sells his benevolent soul to make hay for his family bank account.

Nameless, meanwhile, becomes a scorchingly angry, rebellious, graffiti artist. On the one hand, she paints a mural in her mother’s bedroom inspired by Michelangelo’s painting of God touching Adam’s finger; on the other, she braves the dangers of painting the battered walls of Homs with fiery attacks on Assad’s government. She also gets involved with a young man, and, to her furious dismay, becomes pregnant.

Ultimately, Simon is moved by his correspondent friend to reinvest his talents on a charitable project aboard a rusting rescue boat. Still, he seems motivated more because Angelina Jolie is involved than from the goodness of his heart.

Simultaneously, Nameless decides her situation in Syria is untenable and joins the many refugees seeking, despite the hardships, to flee. And it’s here, in the deliberately inconclusive final moments, that the paths of Simon and Nameless come into contact, much like God’s finger reaching out to Adam’s (and like the characters at the end of Echoes).

For all the play’s emphasis on metaphorical border crossing, the decline in media integrity, the clash between art’s political versus commercial functions, and the significance of the Syrian refugee crisis, the borders crossed seem more personal than physical. Indeed, only those moments concerning Nameless’s escape from Syria—the details of which are almost entirely left blank, except for her suffering—deal with fleeing Syrians.

One story in Borders highlights a man’s abandoning of his humanitarian artistic vision for personal glory and enrichment, leaving his ultimate redemption in doubt, while the other demonstrates the total commitment of an artist to her cause until biological circumstances, more than political ones, are the motivating force behind her abandoning Syria.

For all the play’s hearts-in-the-right-place depiction of Syrian suffering, it fails to go much beyond the depiction of the struggle of two artists to remain true to their convictions, with the Middle East crisis a conveniently dramatic background to their respective dilemmas. In other words, aside from some bits of local color, Borders could be set anywhere there’s a murderously repressive government.

Which is not to deny its onstage dramatic power as co-directed by Michael Cabot and Louise Skaaning, and acted by the gifted Lvova and O’Mara. Coming into and out of the ever-shifting lights, Sebastian and Nameless tell their stories in the first person, changing their voices slightly to represent other characters in the fast-paced narrative dialogues. Often, you get the feeling of rapid-fire, jump-cut cinematic action, like a Jason Bourne movie, especially with Lvova’s athletically conceived performance.

Check this sequence, for instance, which Lvova embodies with physical plasticity and ballistic delivery:

Am squeezing past, heading to the bus-stop,

when the sudden sound of aircraft.

A burst of red light. A thumping explosion.

Flashes from nearby rooftops.

Chaos of the crowds,

Borders is knife sharp, bullet fast, and edgily funny. But when it comes to illuminating an impossible situation, the play’s expressive (but uncredited) lighting does a better job for the staging than the contents do for the horrific circumstances they depict.

Next Door at NYTW/4TH Street Theatre