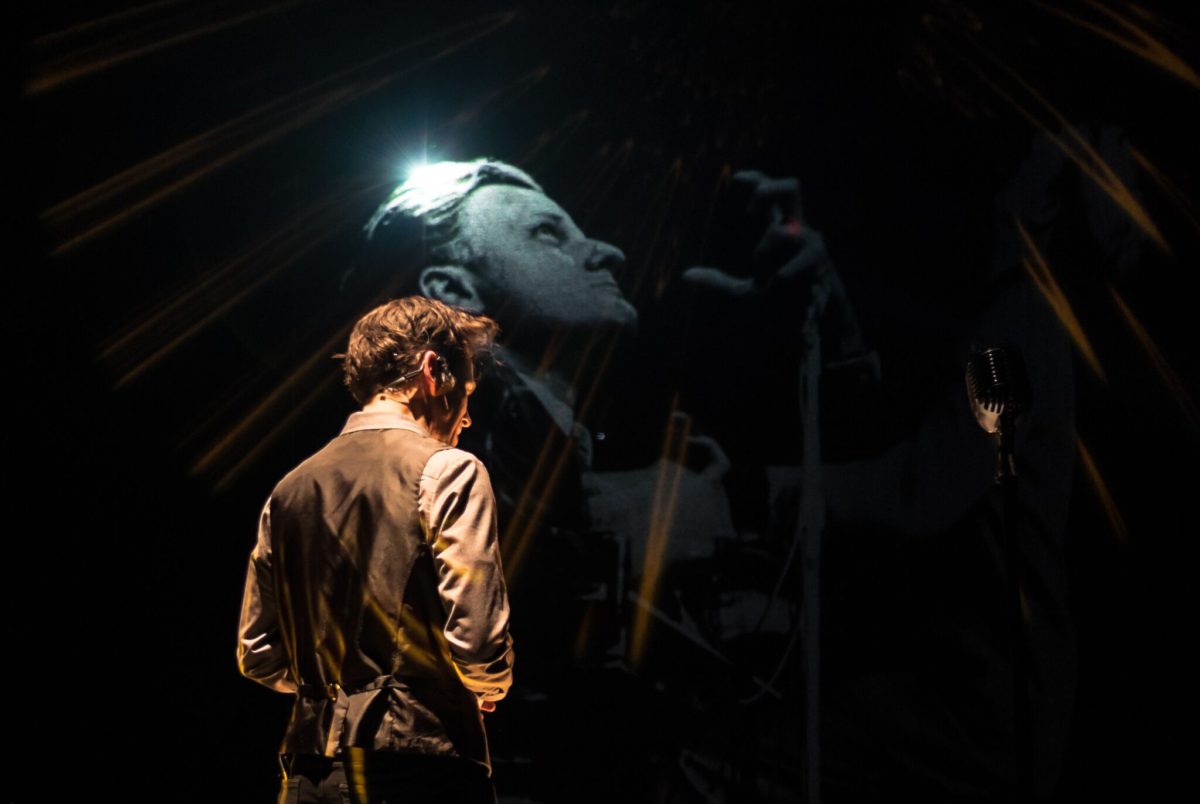 A consummate researcher, Miller’s selection of archival imagery, data and anecdotes allows him to paint post WWII society in quick, colorful strokes. At the same time, the performer tells very personal stories culled from interviews he conducted with boomers. These personal revelations support sociological truths, and wed the human and the cultural with finesse.

Plot wise, there are a few recurring characters that help the Narrator weave a story. It’s a mashup of a few quirky boomers with celebrities – Perry Como to David Bowey – and politicians, Winston Churchill to Lyndon Johnson, and all the news people and gossips columnists who reported on them.

At the end of the 90-minute whirligig of a show, the personal stories come together, bringing resolution to this entertaining history lesson.  The intimate connection that’s made between two of the central characters, Miller expressed in a post-show talk back, is based on interviews with his parents.

Performed in a cylinder, a tight space indeed, Miller does the time capsule thing with extraordinary aplomb. He’s a great impressionist, imitating Jimmy Stewart in It’s a Wonderful Life, Jerry Lee Lewis at the piano and both Richard Nixon and John F. Kennedy in the first ever televised presidential debate. Many scenes are acted out through shadow play.

While the production is minimalist, the use of video and projections (Ardon Bess and David Leclerc) and lighting (Bruno Matte) unifies a multitude of diverse elements. Singing The Eve of Destruction, for instance, Miller is accompanied by slides reporting the USSR’s 1st walk in space, followed 3 months later, by the US spacewalk.

The production utilizes intense messaging. And it renders a sense of society then, in a way that sparks nostalgia, but more importantly sheds light on the times we live in now.

As a culture critic, Miller’s observations are well chosen. A character named Rudi opines, “Kennedy’s inauguration was a lot like Obama’s first inauguration. Full of hope that would very soon dissolve.”

And as an observer of people he also hits on some primal issues – family outings to the A&W drive-in and a teenager with her hula hoop – carry a different kind of immediacy to hiding under the desk in elementary school.

Miller has been performing this show across the country for several years. This is his New York debut.