Two classic works, “Birthday Candles” at the Roundabout Theatre on Broadway and “The Patsy,” in revival by the Transport Group off Broadway at the Abrons Arts Center, bring to light the innate divergence between Broadway and off Broadway. While both plays reflect on the life of domesticity, the importance of family, and the meaning of love, they come to their divergent conclusions in very unusual ways. 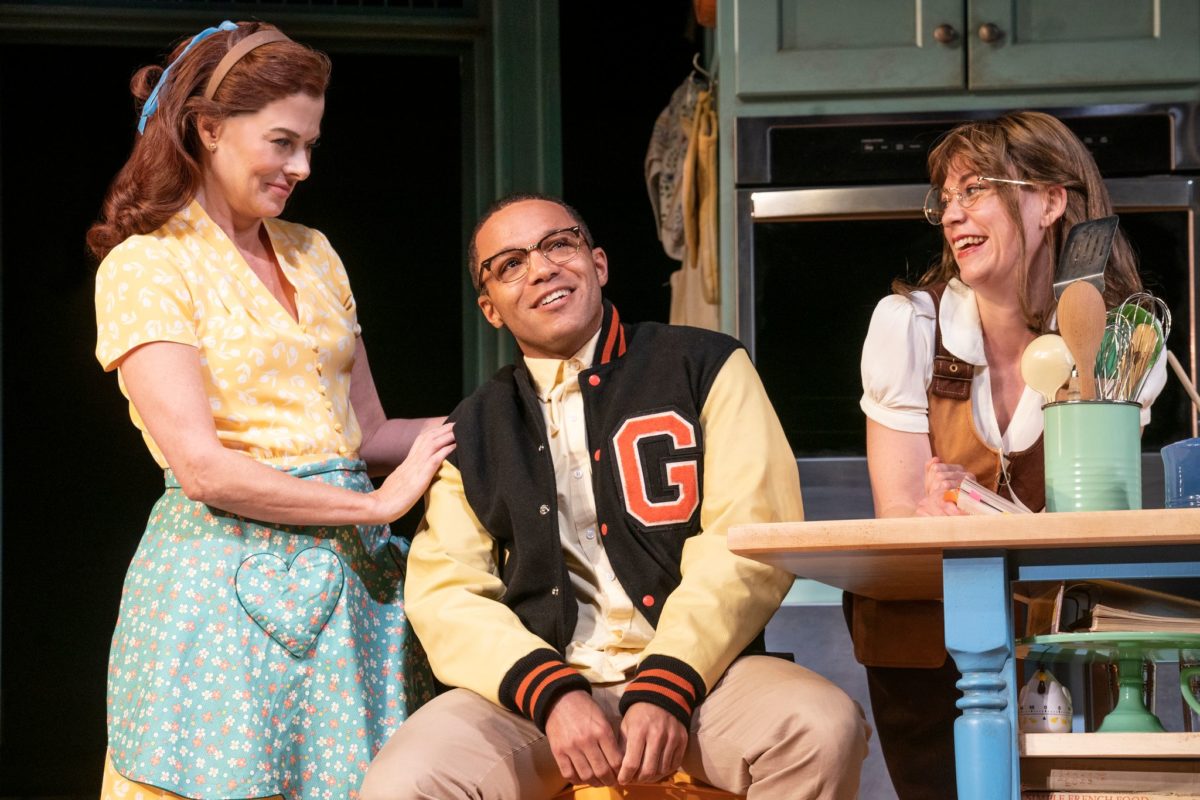 Two classic works, “Birthday Candles” at the Roundabout Theatre on Broadway and “The Patsy,” in revival by the Transport Group off Broadway at the Abrons Arts Center, bring to light the innate divergence between Broadway and off Broadway. While both plays reflect on the life of domesticity, the importance of family, and the meaning of love, they come to their divergent conclusions in very unusual ways.

In addition, each of these productions achieves a resonance with its venue that is fundamental to our appreciation of New York theater. “Birthday Candles” on Broadway takes a sentimental dive into the circle of life. Its domain is the universal, even if it is a trifle.

In a contrary mode, “The Patsy,” off Broadway, reveals an ironic lust for material wealth and prestige that is so particularly American. It’s also a limited vision, but in David Greenspan’s jovial hands, the show is also a real kick!

In “Birthday Candles”, Noah Haidle’s new play, Debra Messing portrays Ernestine from age 17 until her 107th birthday. Messing plays the younger and older characters as though imagining how those years might have been, or how they will affect her. When she portrays her character in her later years, we see that the actor is inventing – she is suggesting agedness, but not capable of it.

There is a great deal of skill in making transformations over 90 years look graceful. Given Messing’s gift for physical comedy, the process feels coy and playful, even when it looks wonky.

As Ernestine grows old and becomes ill, the charm of her discoveries and her denials equally are fetching. Transforming from rebellious youth to comfortable old age, the actor steals our hearts.

As the play opens,17-year-old Ernestine questions her place in the universe. She’s starring in the annual high school production of Queen Lear. Still, she asks her mother if everything is fated, or if she will have some agency in her own life.

She’s thirsty for what lies ahead – boyfriends, marriage, children. We see her through nearly 90 birthdays, each celebrated by baking her mother’s special birthday cake.

On stage as in life, the repetition of daily routines defines domesticity. The bonds that tie and express loving are sealed in this way. Later, after divorcing her first husband, played delicately and with finesse by John Earl Jelks, Ernestine accepts him back in her home. He’s aged and he’s failing. “They say we go from childhood to childhood,” she says while holding a spoon to feed her husband – the same food she used to serve her children.

In addition to Jelks, Susannah Flood as her mother, daughter and granddaughter is marvelous – understated, and in the moment. Later her daughter-in-law (Crystal Finn who also plays multiple roles) and her son (Christopher Livingston, playing multiple roles) appear as a young couple she does not recognize. Still, she hands them the recipe for life, by teaching them to bake a birthday cake. Through the cycles of youth, love, age, and finally death, life comes full circle.

Designer Christine Jones’ sets all of the action in the family kitchen. And she creates the fabled world of Ernestine’s imagination with flying globes, sleds, and cooking utensils all flying overhead.

Off Broadway in “The Patsy,” however, domesticity gets quite a different take. David Greenspan’s performance piece, is a wildly entertaining satire about middle class aspirations. As is his wont, he plays all eight characters in a performance that is exhilarating to watch.

Based on the play by Barry Connors, which was a successful comedy drama on Broadway in 1925, it is basically a Cinderella story. Patsy, the younger of two siblings and the less likely man trap, used as a fall guy by her mother and older sister, finally meets her prince.

The conflict, obviously, is seeded in the familiar American aspiration for success, status, and acceptance. They’re all going “crazy on the subject of society,” one of Greenspan’s characters opines.

With David Greenspan playing all eight roles, the action flows quickly and seamlessly. Each of the actor’s gestures leads us to another character, which then falls into the hands of another who is about to be swept off their feet, or punished, or kissed. It’s a whirligig performance. Even handshakes between father and future son-in-law connect by the actor turning quickly just half a circle.

Characters in this fast-paced comedy drama are identified by gesture and intonation. For instance, the wealthy young man who is suiting the older daughter walks with tap dancing steps and his hand gestures express his privilege and self-assuredness.

Indeed, Greenspan’s unique brand of storytelling has a long and successful history off and off off Broadway. In a 2007 New York Times article about his oeuvre, the financial sacrifices of working off Broadway are clearly accounted.

Indeed, emerging in the 1950’s, off Broadway was a reaction to the commercial theater of its day. The goal of the off Broadway theater movement was inclusiveness. It opened the doors to creative artists who had to work with limited production budgets and without union contracts. Artists who created art for art’s sake took to the off Broadway stage.

Clearly, both of these productions mine the depth of their venues. The sense of universality and expansiveness of “Birthday Candles” could only be produced on a big stage. On a much smaller off Broadway stage, “The Patsy” evokes the reality of the stuffy drawing room in which one “glorious freak,” as Greenspan has been called, glides, struts, collapses and runs again, seemingly without stopping for breath.

For completely different reasons, both productions are joyous.